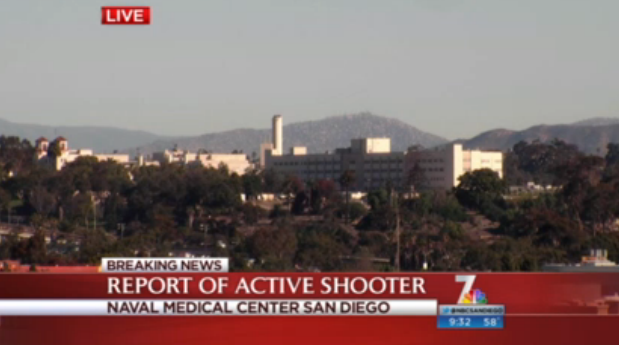 UPDATE from CNN:  The incident has been reported as a false alarm, the military indicated Tuesday.

Investigators have found nothing to substantiate one person’s report that someone fired gunshots Tuesday morning at the San Diego facility’s Building 26, which contains barracks, a gym and administrative offices, Navy Capt. Curt Jones told reporters.

Authorities at the center’s 78-acre campus ended a shelter-in-place order at 1:45 p.m., and patient care and access resumed thereafter, the Navy said.

At around 8:15 a.m., the San Diego Police Department (SDPD) confirmed that officials at NMCSD reported shots fired in the facility. There has been no confirmation of shots fired or injuries at the compound.

NMCSD advised all personnel to not report to work and avoid the area. Officials at the facility told NBC 7 that, as far as they know, this is not an active shooter drill or training.
Individual buildings at the Naval hospital were all placed on lockdown, one employee said, and the front gate to the facility was also locked.

At around 8:30 a.m., two California Highway Patrol officers were seen entering the facility through an emergency room entrance near Florida Drive. A steady stream of other patrol cars from multiple agencies, including the SDPD and Chula Vista Police Department, could then be seen flowing into the area surrounding the military hospital.

By 8:45 a.m., a SWAT truck was seen storming the military hospital.

“This is the first time I’ve ever seen this happen,” the staffer told NBC 7. “I’m thinking this is something real serious if the SWAT team has to come in. It’s really concerning for me that there’s something going on at the hospital.”