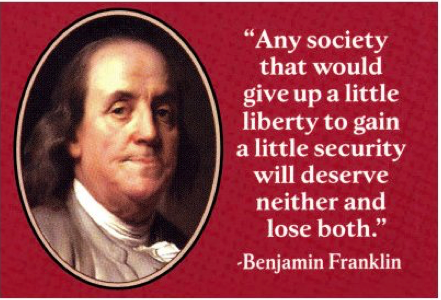 The right to bear arms is a fundamental RIGHT given to each one of us by our Creator, and has been secured within the U.S. Constitution by our Founding Fathers. While the Second Amendment includes our right to defend ourselves and our families against any criminal who seeks to harm us, its main purpose is to protect us from TYRANNICAL GOVERNMENT.

As long as the American people remain armed, it keeps TYRANTS at bay. That’s why Americans cherish this inalienable right so much, and that’s exactly why the radicals in power downright hate it as they do. The Second Amendment is a barrier that protects the American people from an outright takeover.

The executive actions President Obama proposed on Tuesday aren’t really productive measures that will stop dangerous criminals from getting guns. They are only ‘in your face’ measures to, yet again, show the American people how easily he can abuse his Execute power by bypassing congress anytime he wants.  (And why not? He knows the spineless cowards aren’t going to do anything about it…)

The president’s executive actions are also measures to stifle only law-abiding citizens (not criminals or terrorists), while opening the door for even more gun control in the near future.

Lastly, President Obama’s latest gun grabbing crusade (aside from using his lapdog media to push his propaganda via clever “word-smithing,” false data, and “cry baby” theatrics) is mainly to keep the American people upset, frustrated, and angry. Remember that the radicals in power thrive on keeping the populace perpetually upset. It’s Alinsky 101.

The creation of unbearable stress and crisis in our nation is all about frightening Americans, thus breaking down, rebuilding, and morphing the U.S. into a more Marxist shell of her former self.  We must continue bringing awareness that this is the way the radical left operates and it is the entire reason behind all they’re doing to the country we love so much.

So, while the radicals are busy “fundamentally transforming America,” a great deal of this transformation is taking place inside the hearts and minds of Americans. We are continually being pressured, stressed, and bullied–so to combat this, we must discover the inner strength to endure such tensions without being adversely affected.  If not, WE change–which is exactly what they want.

The “powers that be” don’t even have to convert us to win. They don’t really have to change our worldview or our core values. All they have to do is weaken our capabilities by stressing us to the point that (1) we burn out (2) we get so angry we end up doing something stupid that serves their agenda, or (3) we give up and drop out completely… at least that’s the outcome they are fully anticipating.

So, keep the Faith, stay calm, and whatever you do–DON’T GIVE UP YOUR GUNS!