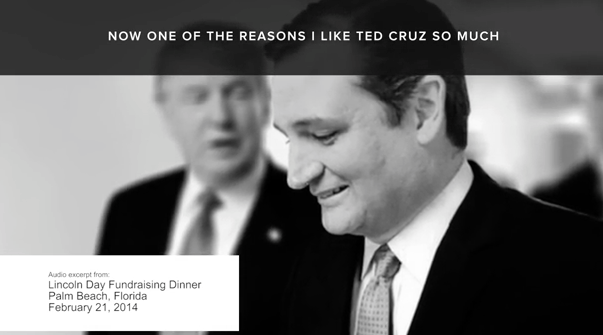 A new ad has been launched by Keep The Promise PAC featuring a clip of a 2014 event in which Donald Trump not only introduced featured speaker Sen. Ted Cruz but Trump heaped tons of praise on the Senator.

From Keep the Promise:

Donald Trump unleashed a personal attack on “This Week” this morning against Ted Cruz and Keep the Promise super PACs are releasing a counterattack. Trump may think the ad is all about him – after all, it’s his words throughout the spot – but really, voters need to know how amazing Donald Trump thinks Ted Cruz really is.

“Primary contests can turn ugly, especially when frontrunners realize their lead is shrinking and that voters might prefer a solid record to snarky rhetoric. Mr Trump launched a personal, uninitiated attack against Senator Ted Cruz by suggesting ‘no one likes him.’ But guess who likes Cruz? Donald Trump. He calls him ‘brave’ and ‘a special guy’ in our new ad. Voters agree. They know who has been there and who they can trust: Ted Cruz,” said Kellyanne Conway, president of Keep the Promise I.

“It is becoming increasingly obvious that Donald Trump’s main concern is and always has been about protecting Donald Trump. By contrast, Ted Cruz’ main concern has always been protecting the Constitution. Before Ted Cruz began beating him in polls, Donald Trump said it himself, “what [Ted Cruz] is doing is right…it’s common sense, it’s good government.” In this election, we need a candidate we can trust to consistently support the Constitution no matter what the polls say. That’s why we support Ted Cruz,” said Jon Francis, president of Keep the Promise III.

“Say anything, do anything politicians are what upsets Republican voters the most,” said David Barton, chair of the affiliated Keep The Promise PAC. “Donald Trump’s about-face, negative attacks on Ted Cruz are proof he has neither the temperament nor judgement to lead our country. It proves Trump is the ultimate political opportunist.”

Here is the ad entitled ‘Controversial’:

Transcript of the ad:

:19 in – “Now one of the reasons I like Ted Cruz so much, is that he’s not controversial. (laughs)

But the truth is, he shouldn’t be controversial because what he’s doing is right. He took a stand,

(applause) he took a stand recently that if he had just a little bit of backing, and Ted and I have

spoken about this from other of your Republicans, I mean they hit him harder than they hit the

Democrats. If they hit the Democrats that hard, it would be a lot easier, in life. But he took a

stand, and it was a brave stand, and had he really had a little backing, he had some, but had he

had more, you would have negotiated one hell of a deal. It might not have ended Obamacare,

but you would have really gotten a big chunk out of it.

And, I just watched him, and I watched his motions. And you’re going to see it here in a second

tonight, I watched what he was saying and I listened very carefully, because I’ve heard him

speak on numerous occasions, and you have to agree, and I don’t understand the controversy,

it’s common sense. It’s good government. It’s so many good things. But he really is a special >

guy, he went to Harvard. Great student. He went out and became a great lawyer. I wish I knew

(laughs) He ran for the Senate. He won. He’s now a very very popular and important figure in all

of our lives, and in this country’s life.

So, with that I’d would like to introduce a very special guy, Senator Ted Cruz (applause).

Daniel Greenfield: Bernie Sanders and the Threat to the Left's Aspirational Brand