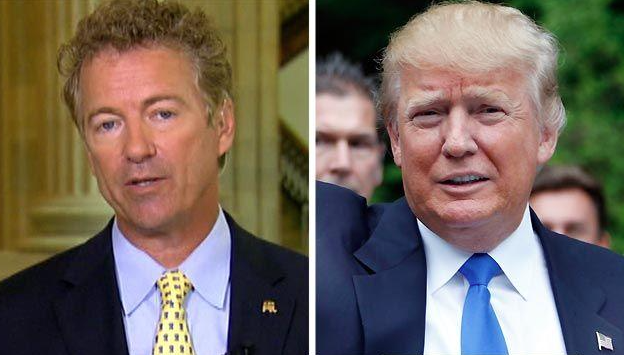 Up next:  Donald Trump attacks Ted Cruz over his eligibility to run for President.  Which Senators will be around for Obama’s last SOTU? Rand Paul new attack d called “Trump Time,” and Gary Johnson is back

Trump vs. Cruz on Birtherism

In an interview with the Washington Post, Donald Trump was asked if Senator Ted Cruz is eligible to run for President because of his birthplace. “Republicans are going to have to ask themselves the question: ‘Do we want a candidate who could be tied up in court for two years?” Trump responded. “You don’t want to be running and have that kind of thing over your head.”

The remarks from Trump were brought up in an interview before a rally he held in Lowell, Massachusetts. Cruz has be gaining momentum that has posed a serious threat with his rising poll numbers especially in Iowa where Cruz is leading over the real estate mogul. Both have be friendly with each other over the past year, refusing to take the media bait to crumble the Cruz-Trump political sbromance but as February 1 Iowa caucuses is around the corner, the gloves might come off.

Cruz responded to Trump’s remarks on Twitter with a tweet referring to an episode of the show “Happy Days.” The clip “jumped the shark” implies a sign of desperation as one uses some type of gimmicks to keep viewers’ interest alive.

My response to @realDonaldTrump calling into question my natural-born citizenship? https://t.co/gWfAHznlCY

Trump added that he likes Cruz in another interview when ask about his remarks and that Cruz should ask a judge for a declaratory judgment. “I would hate to see something like this get in his way,” Trump said in an interview with CNN’s The Situation Room with Wolf Blitzer. “Here is what I think he should do, seek a declaratory judgment to seek a decision when there is a doubt to ask a judge to rule that he is eligible to run for president. I’m doing this for the good of Ted, I like Ted and he likes me, we have a good relationship.”

When Cruz was questioned about Trump’s comment, he replied that he would let his tweet do the talking and later added the media should move on and focus should be on substantive issues. Earlier today, Cruz told Dana Bash in an interview inside his campaign bus there is no legal controversy in regards to this issue. “The legal issue is straightforward,” Cruz said. “Listen the constitution and the laws of the United States are straightforward. The very first Congress defined the child of a U.S. citizen born abroad as a national-born citizen.”

Is Ted Cruz is eligible to be President? YES!

As per the constitution requirements (Article II, Section 1)

– Natural Born citizen? (Check! – Cruz’s mother is a U.S. citizen and moved to the United States at the age of 3, therefore he didn’t have to petition for citizenship)

Next week on Tuesday will be President Obama’s last State of the Union address and most of Congress will be there to attend except Senator Ted Cruz.

Cruz will instead spend the day in New Hampshire according to invitations his campaign sent out where he will be holding a gun rights rally at a gun range in Hudson, N.H, and a “State of Our Union Town Hall” meeting before the President speaks in Londonderry, NH.

With Cruz missing out on the Washington Cartel Live show, his colleagues and GOP rivals, Marco Rubio and Rand Paul are expected to attend. According to Rubio aide, he is expected to join Paul at the State of the Union address. Prior to the address Rubio will be holding a reception at the Hill Country Barbecue Market in D.C. Let’s see if Rubio will stay with supporters to watch the address or will watch it with Paul in the chambers.

When asked why Cruz will be skipping out the annual address (where lawmakers of both sides of the aisle attend), his spokesperson Rick Tyler said Cruz is going to New Hampshire on Monday and Tuesday, “working hard to win New Hampshire.” Last time Cruz visited New Hampshire was in mid-November and will plan a five-day bus tour during the week of January 17.

As for the three Senators attending the House/Senate GOP retreat in Baltimore that begins next Wednesday until Friday might be difficult for all to attend their Senate duties. The next schedule GOP debate is next Thursday in which both Cruz and Rubio will be on the main stage debate lineup. Paul, however his faith in being in the main stage lineup remains uncertain as possible he might be booted out due to FOX Business debate criteria. On Friday, Cruz campaign announced he is scheduled to campaign in South Carolina for a rally on the campus of North Greenville University. No announced scheduled posted for Rubio and Paul after the GOP debate.

The five suggestions in the video are “Watch him be a Democrat,” “Read about how he steals people’s property,” “Learn things you shouldn’t say on television,” “Calculate how much Trump takes from his campaign to fly,” and “Read about his four bankruptcies.” Each suggestions bashes Trump based on his past remarks and his bankruptcies that are public knowledge.

Paul’s campaign said they air this ad in response to Trump’s first ad, which they called it “ridiculous as he is.” “Now is the time when voters are really starting to pay attention,” Paul’s campaign said. “We thought people should hear substance and some of what he [Trump] is hiding from voters.”

PolitiChicks has reached out to Trump’s campaign in response to Paul’s attack ad and we will update this post if we hear back.

Gary Johnson is Back Running for President as a Libertarian

Former New Mexico Governor Gary Johnson who ran for president in 2012 as a third-party candidate in the Libertarian line announced on Wednesday that he is back once again seeking the White House.

Appearing on Neil Cavuto’s “Coast-to-Coast” on Fox Business, Johnson announced his presidency, hoping to be “the voice of reason” against the two major parties.

“I want to take this opportunity to announce my candidacy for president,” Johnson said. “I am hoping to get the Libertarian nomination for president in 2016”

Johnson declared his intentions based on the largest issues the country will have to deal with after President Obama’s leaves and that is $20 trillion debt with a government “too big and unwieldy and out of control.” “I do believe that crony capitalism is alive and well,” Johnson said. “Both Democrats and Republicans contribute to that. I would like to be that choice that is not going to succumb to that.”

Presenting himself as the alternative candidate, Johnson believes that Hillary Clinton will be the democratic nominee and Trump appears be the Republican nominee, the attention will focus on “Is this all the choices that we have?” He argues that Libertarians appear to voters who are dissatisfied with their own two parties options.

In 2012, Johnson only received less than 1 percent of the votes from 48 states his name was in the ballot. The likelihood for Johnson to alter the 2016 race looks like he will only garnish the same 1 percent or less.

Christie and Kasich tied for third at 11%

Fiorina and Carson with 4%

Huckabee and Santorum with 1%

Follow The Candidates on the Campaign Trail for January 7, 2016:

Has America Become What Our Forefathers Sought to Destroy?