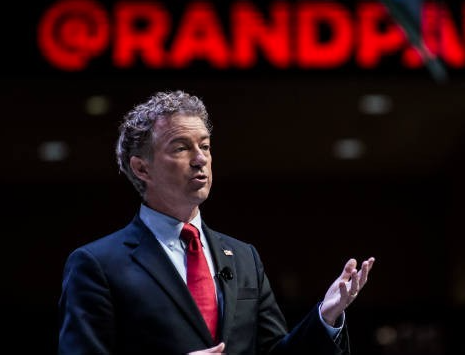 Ringing in the New Years with Fox News ‘All-American New Year’ hosted by Kimberly Guilfoyle and Eric Boiling, certain candidates participated to share their plan live for 2016 before the ball dropped in Times Square.

Here are the candidates’ messages either taped or live of their resolution.

Rick Santorum (Taped)- “My resolution is to stay off the ice cream in Iowa that has been an expansive affair for me.”

Jim Gilmore (Taped)- “I resolve this year to be as obnoxious and loud as possible so I can get invited to the next Republican presidential debate.”

Marco Rubio (Taped)- “My resolution is to do everything I can to not just to restore the American dream but to expand it and to reach more people and change more lives than ever before. So that this, the greatest country in the world, can be greater than it has ever been.”

John Kasich (Taped)- “Well I’d like to wish you, your family, your loves ones, a very, very, happy new year and I hope everybody will use this opportunity for a great new start in a new year with all the success, and I hope you all have peace.”

Jeb Bush (Taped)- “To all my friends, I hope that we have a prosperous, healthy & secure New Year’s.”

Rand Paul (Taped)- “As 2015 comes to an end, I want to wish everyone watching a successful New Year. America is the greatest, freest, richest, and most humanitarian country in the history of mankind. To keep America great, we need to protect the liberty our founders’ enshrined in the Constitution. Both parties has let us down. They forgotten that their first duty is to defend the Constitution and that means balanced budget, and a government so small you cant barely see it. If Washington continues to ignore the constitution then maybe 2016 is the year to limit congressional term once and for all. The year my resolution is to preserve our liberties and restore prosperity across America. 2016 needs to be the year of real change in Washington and I’m ready to make that change if you stand with me.”

Cruz goes on to tell a story he heard on the campaign trail:

Ben Carson (Live)- “We are incredible fortunate to be in a country where you still have control over what happens to you. You know if you get a good education in this country, it doesn’t matter what your background is, you basically get to write your own ticket. So what that means for our nation is to make sure that we afford a good education to all our people.”

Democrat Martin O’Malley: “As we reflect on 2015, I think we should also be grateful to all of our military families for their service to our country and also I look forward to 2016 being a year that we can realize as a nation that there’s more that unites us than divides us and we can move forward again as a people.”

Trump’s message to Hillary Clinton- “I think I’ll be her worst nightmare but we’ll find out.”

Trump’s resolution- “My resolution is to make America great again.”

This year my resolution is to preserve our liberties and restore prosperity across America. #NewYearResolution

It continued with Paul resolving, to not let the mean things people say about his hair get to him:

I resolve to not let the mean things people say about my hair bother me. #curlyhairdontcare #newyearsresolution pic.twitter.com/HVMr0vYbOj — Dr. Rand Paul (@RandPaul) January 1, 2016

Then Paul resolved to be more like Donald Trump:

I resolve to speak in vague but bombastic generalities more #newyearsresolution pic.twitter.com/AR741BUOvQ

I resolve to spend less time voting in the Senate so @Marcorubio & @tedcruz don’t look bad bc they don’t show up for work. JK. Do your jobs. — Dr. Rand Paul (@RandPaul) January 1, 2016

Paul’s most direct tweet attack was to Cruz where he accused the Senator of stealing his political positions:

I resolve to give @TedCruz more lead time before I announce my policy positions, so he can replicate them faster #NewYearsResolution

Lastly, the resolutions were about liberty and the Bill of Rights…

My wife @KelleyAshbyPaul tells me I need to resolve to be nice to the media in 2016. I don’t think so Kelley! #newyearsresolution *hides* — Dr. Rand Paul (@RandPaul) January 1, 2016

So far Ted Cruz and Ben Carson has released reports of how much money its campaign has raised in the fourth quarter from October 1 through December 31, 2015. Official fundraising reports are not due until January 31, the day before the Iowa caucuses.

Ted Cruz raised nearly $20 million, the highest total to date for his campaign. His total for the year is more than $45 million. In the 3rd quarter, Cruz raised $12.2 million during a period that showed Cruz was rising in the polls to become a top-tier candidate in part from his stellar debate performances.

Ben Carson raised around $23 million according to his former campaign manager Barry Bennett. However, the campaign might have blown through half the $11.5 million in reserves they had during the start of the 4th quarter according to Carson campaign treasurer. The impressive fundraising haul comes during the time Carson’s poll numbers have collapsed. Gaining momentum in mid-October to one time becoming the front-runner beating Donald Trump have plunged when the Republican presidential race turned to national security in the wake of the Paris attacks in November.

After fallen to 10% nationally behind Ted Cruz and Marco Rubio, Carson announced a major shake up would be occurring within his campaign operation. The move, Carson said was needed to jumpstart his campaign with a “strategy that more aggressively shares my vision and world-view with the American people,” Carson said in a statement.

The infighting with Carson’s campaign team against Carson’s longtime friend Armstrong Williams, who doesn’t have an official role, marked in part of his aides to resign. Williams attacked Carson’s team for putting the candidate in situations where he was ill prepared. In the Republican Jewish Coalition speech in the beginning of January where Carson read off from a prepared speech as he repeatedly mispronounced the name of the Palestinian terrorist group “Hamas.”

“His campaign has to do a better job at preparing him,” Williams said in an interview with CNN. “Don’t give him speeches at the last minute. It’s not only on him, it’s on them.”

Bob Dees, a foreign policy adviser to Carson, is now the campaign chairman. Ed Brookover, a senior strategist, will be the new campaign manager and Carson’s Iowa state director Ryan Rhodes will remain with the campaign.

Carly Fiorina tweeted her support of the Iowa Hawkeyes prompted a twitter storm of pandering and a curse as the Cardinal crushed the Hawkeyes 45-16.

Before Iowa played Standford, Fiorina tweeted that she was willing to cheer for Iowa’s football team to beat her own alma mater the Stanford’s Cardinals.

Love my alma mater, but rooting for a Hawkeyes win today. #RoseBowl

That tweet didn’t play as well as backlash rose prompting a new hashtag #CarlyCurse that spawned from Iowa losing big to Stanford. Those tweets accused Fiorina of putting a curse on Iowa.

75-yd TD reception on the first play of the game? Can we trend #Carlycurse yet?

Republican Rep. Justin Amash of Michigan tweeted his disapproval of Fiorina’s tweet calling it an insult to Iowa voters:

Why would you root for the Hawkeyes? This is insulting to voters in Iowa (and everywhere). https://t.co/4UvjIGYSun

Guess Carly learned the hard way that mixing sports and politics is not a good idea.

10 Things America Must Do to Defend Itself From Jihad