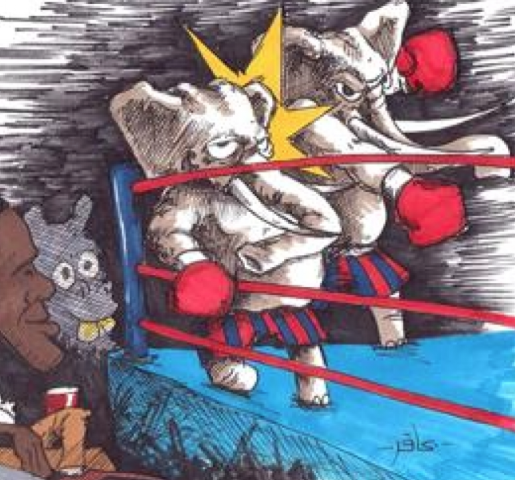 As the blizzard is going on outside, I’m watching the news and reading the blogs and memes of political pundits, I feel as if I’m watching a storm going on in politics with everyone thundering and throwing lightning bolts at each other. You would think this election would be a slam-dunk for Republicans, but to quote the Red Hot Chili Pepper, are so-called conservatives simply “giving it away”?

Many on the left want Hillary, but considering all that’s going on with her any thinking person would think twice about actually voting for her knowing she is under a federal investigation.  Even The New York Times is digging into the funneling of money in her Clinton Foundation and the lies are being unearthed.  And there are even questions and concerns about her physical/mental stability.

Then you have the Socialist self-promoter Bernie Sanders, whose ideas of Utopia are appealing to the young and the poor and the downtrodden.  Fact is, they already heard it all before from our current President when he was a candidate.  Even if they actually wanted to share their wealth, which the majority do not, these people know it will be a hard climb to get what they need or want from a government if they have to keep sharing the pot.  Obviously the current President’s hopes and dreams of change were not the same as the people out there who voted for him and are now left broke, floundering for health insurance, still trying to keep up with their student loans and living paycheck to paycheck.  And the elderly and the vets have lost in so many other ways, worried more then ever about surviving.

Thus I do believe there will be some sort of blow up within the Democrat Party. How it will happen? If former Governor of Baltimore Martin O’Malley is chosen, he will be great competition for the GOP contender. This is a handsome man with charisma and charm and when he ran Baltimore as mayor, he cleaned it up. He put money into construction and education for the poorer areas, added more police officers to help clean up the crime leading to what O’Malley has said lowered Baltimore’s crime rate. (This is controversial since there were varying reports and statistics are disputed.) The surplus economic benefits O’Malley left the city in has been one of the few proud successes of this region. Then after becoming the Governor of Maryland, O’Malley passed progressive bills that allowed in-state tuition for the children of illegal immigrants and same sex marriage.

On the flip side, we’re currently hearing anything and everything about Cruz or Trump, Trump or Cruz, with a few mentions of Rubio (although no one I personally know says they really like him, other than thinking he’s ‘cute’).  But basically Rubio is the ignored “middle kid”.

What I’m observing here in Virginia is that the same people who pretended to run a non-existent Romney campaign in 2012 are at it again, ignoring crucial NOVA votes. Hopefully this time they won’t ignore the grassroots minority community, particularly the Asian vote the way Romney (and Ken Cuccinelli) did, concentrating on their Old Boys Club, paying back donation favors.  Meanwhile Terry McAuliffe ran around around shaking hands at all the important minority events, not trying to look like a rock star, and surprise, he won. It seems like some people forgot that money doesn’t win an election; votes do.

Of course, we want the best person to win which is why it’s crucial to run a successful ground campaign.  Romney could have (and should have) if his campaign had been handled correctly.  You don’t ignore major important parts of the voting population. You may get $10K from one person but that still only represents one vote, whereas if you go to a major minority grassroots event and shake some hands and show them you care, that can result in an easy 1,000 or more votes.

All said,  and like him or not, Donald Trump is doing everything right. No one can dispute that he is a great businessman and his business acumen in marketing is brilliant.  He is not politician or an eloquent statesman, but he does know how to get people on his side and has probably been in meetings with the best marketing strategists money can buy.  Then there are the Ted Cruz supporters. Hardcore Cruzers want to believe he can win based on what is right and good, but unfortunately that doesn’t always happen.

So why are we fighting each other instead of Hillary, Bernie, and O’Malley?

We’ll see how this one goes, but for all the GOP candidates and their campaign managers, I’m hoping they will listen to the majority and shove their egos aside–because Democrats love when we fight and mix personal emotions with politics.