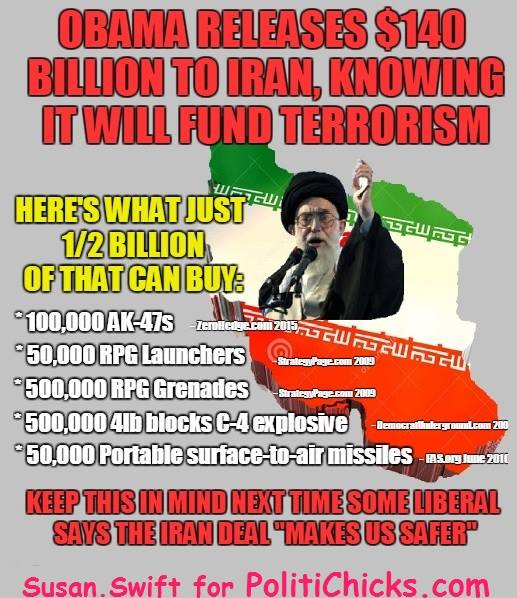 In his deal with Iran, President Obama not only capitulated to creating a nuclear Iran, he also gave Iran a financial windfall between $140 and $215 billion dollars:

“The termination of nuclear sanctions means Iran will pocket about $215 billion in cash,   sell another million barrels of oil a day (bpd), and produce 5 million more bpd within 10            years; while the West gets 20 years of cheap oil.”

Obama recognizes that “Iran is a state sponsor of terrorism.” Even worse, Obama admits those billions will be used to fund terrorism.

So using real life numbers, just how much terrorism can Iran fund with Obama’s money handout? Here’s a sample. For about $500 million (just 0.3% of the estimated $140 billion), Iran could fund the following black market shopping list for terrorist groups:

And how do these black market goodies translate into real life situations?

The takeaway is that Obama supplying money to Iran will predictably allow that terrorist state to fund massive worldwide terrorist activity for years into the future. Yet the Democrats and their Media sycophants hail it as a diplomatic and foreign policy victory. Obama defenders counter that Iran would fund worldwide terrorism anyway regardless of the deal, but this absurd argument ignores that Iran can now spend additional billions to promote its goals of regional hegemony and anti-Western terrorism without the constraints of world sanctions. The argument further ignores that spending even a fraction of the $140 billion can fund extensive worldwide terrorism into the indefinite future.

Obama now has a “deal” that he can display like an AYSO participant trophy in the foreign policy wing of his Presidential Library. It is transparent that his “deal” has far more to do with personal legacy and vanity than with national security. The lingering issue, the only question that really matters, is: Do you feel safer now than you did 8 years ago?