Don’t get me wrong, I know Huckabee has a tendency to play d 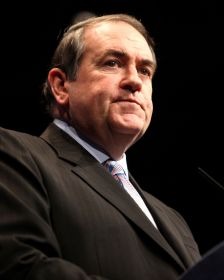 irty in politics, but still, I can’t help but wonder if he hasn’t taken a page out of Donald
Trump’s How to fight dirty Handbook when it comes to attacking a person’s character and faith instead of issues.  Yes, I know, I’ve been told multiple times that all’s fair in love, war and politics, so attacks are expected, and they’re expected to get dirtier as desperation grows.  But as a Christian, I find it difficult to watch Christians fight down and dirty against fellow believers for political gains and losses.

With Huckabee at least, seems as if Ted Cruz hasn’t given enough in tithes to suit him, and questions Cruz’s faith because of it.  Huckabee told Buzzfeed in a recent interview, “If I can’t trust God with a dime out of each dollar that I earn, then I’m not sure how I can tell him that I trust him with my whole life… To me, it’s a validation of a person’s stewardship and whether they put God first in their life, not just in their political endeavors.”

Galatians 6:1-3 tells us, “If anyone is caught in any transgression, you who are spiritual should restore him in a spirit of gentleness. Keep watch on yourself, lest you too be tempted. Bear one another’s burdens, and so fulfill the law of Christ.”

My question then is not only to Mike Huckabee who has run multiple times for President, but those who are using his tactics to bring out an attack ad against Cruz calling him a phony Christian, how are you restoring Ted Cruz in a spirit of gentleness by smearing his faith for political gains?  Does your judgement of his lack of tithing justify questioning that which only God has a right to judge? Have any of you attended church with Cruz in the past, or since this issue has come to light, to see if he is genuine in his faith? Are you helping with Cruz’s burden, or dog piling on top of it?

Have any of you done what the Bible suggests, in going to Ted Cruz in private about his tithing?

Why do I doubt that Mike Huckabee or any of those behind this latest attack ad have prayed about Ted Cruz’s lack of tithing or prayed for him for that matter? Or that they never would have considered this an issue had Ted Cruz been as low in the polls as a few other fellow candidates including Huckabee who holds a whopping 3 percent in Florida, between 2 and 6 percent in North Carolina and at 3 percent in national polls?

Seriously, what kind of testimony and witness is accomplished by attacks on one Candidate’s faith in such a way between people who consider themselves Christian simply for political desperation?  I’m sure the secularists are getting a thrill up their leg seeing infighting and judgmental finger pointing among Christians as the primary season heats up.

Why is the GOP So Afraid of Ted Cruz?

“Islamophobia” is How Islamic Law Comes to America