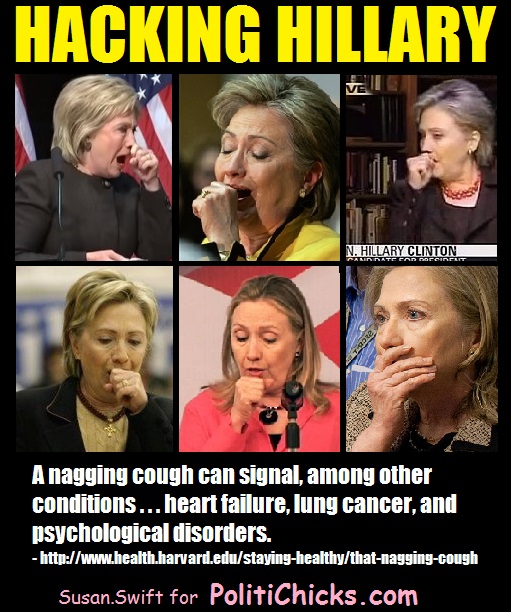 Hillary Clinton collapsed into a “uncontrollable coughing fit” during  a recent campaign speech in Iowa.  But as we are learning, this is far from an isolated incident for the 68 year-old Clinton, who suffers from hypothyroidism and uses prescription blood thinners following a 2012 head injury.

Matt Drudge suggested Hillary suffers from a serious health issue after witnessing her shocking coughing fit during her Benghazi testimony on October 22, 2015.  But Matt Drudge apparently is unaware of Hillary Clinton’s long – and never discussed – history of strange coughing fits going back at least seven years to 2008.  Ben Shapiro has described one of Hillary’s 2008 incidents.   But there are actually many more:

Following these multiple incidents in 2008 in public speeches on the campaign trail, little is publicly recorded about Hillary’s coughing episodes until 2012.  This makes sense – in a campaign, there are more public appearances, under more rigorous conditions, requiring more speeches than as Secretary of State.

Hillary’s return to the campaign trail reveals that these nagging coughing spells are back, or perhaps never left.  Nonetheless, she has been hacking away as Secretary of State, too:

Hillary’s coughing fits are neither trivial nor rare.  They are debilitating, uncontrollable and chronic starting at least as far back as eight years ago.  A friendly Mainstream Media routinely describes them as “uncontrollable”, to the point they can cut short her speeches and interviews.   It’s time Hillary Clinton – already under prescription medicine for a head injury – provide some honest and forthright answers about her hidden and troubling medical condition.