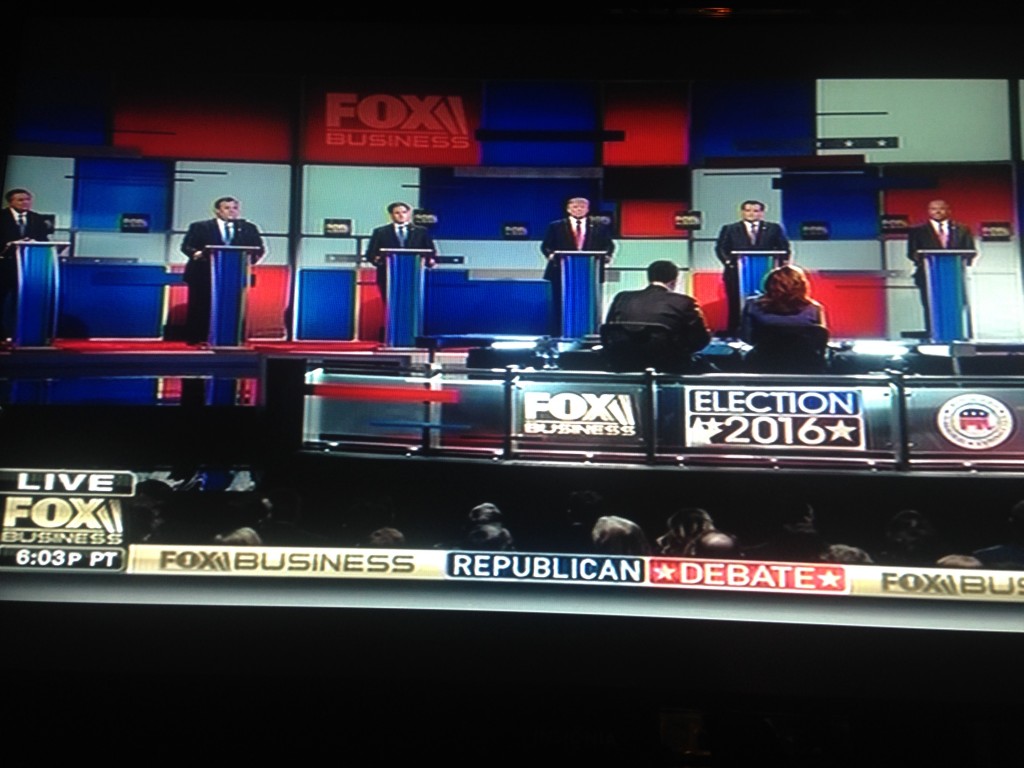 Seven top GOP presidential contenders returned to the debate stage for the sixth installment series, sponsored by Fox Business Network on Thursday evening.  The debate took place just days after President Obama’s final State of the Union address and less than three weeks before the Iowa caucuses. With fewer people appearing in the prime time lineup, it finally provided an indication that the crowded field is tightened down to a four-man showdown.

The bromance between Senator Ted Cruz and Donald Trump has come to a dramatic end as both clashed in the most personal intense encounters ever seen on the campaign trail.

“I guess the bromance is over,” Trump said to reporters in the spin room after the two and half hour event held in North Charleston, South Carolina.

After months of mutual respect amongst both candidates, the Cruz missile came out swinging not only to answer Trump’s criticisms but to also attack Trump past remarks. The bromance between these Trump and Cruz saw both refusing to take swipes at one another during the 2015 campaign trail. Instead, both would refer to each other as friends and even one time ago both candidates hosted a rally in D.C. that showed a possible “a dream ticket” amongst the two.

Both candidates share the same supporters as Trump supporters see Cruz, as their second choice in worst-case scenario of Trump was to ever drop out. However, as the nomination process is about to begin with Iowa just around the corner, numerous polls show both candidates neck in neck and the pressure to win Iowa has mounted into a showdown that show a race coming down to a contest amongst the top two candidates.

The start of the hostilities began over a week ago when Trump started raising questions of Cruz eligibility to run for president because he was born in Canada. “Back in September, my friend Donald has said he had had his lawyers look at this every which way and said there was no issue there,” Cruz said when asked by Neil Cavuto about the “birther” issue. “Now, since September, the constitution hasn’t changed, but the poll numbers have.”

“I recognize that Donald is dismayed that his poll numbers are failing in Iowa,” Cruz said, defending his stance that he is eligible to run for president. “But the facts and the law here are really quite clear that under U.S. law, a child of a U.S. citizen born abroad is a natural- born citizen.”

Cruz went on to add more to this topic of extreme theories would conclude that someone can only become president if both parents were born here in the United States. Under this case, Cruz pointed out that half the GOP contenders including Trump would be ineligible to run for the presidency because his mother was born in Scotland. “On this issue of citizenship, Donald, I am not going to use your mother’s birth against you,” Cruz added leading Trump to fire back, “I was born here, it wouldn’t work.”

The back and forth over the birth right issue continued on with Trump continues his previous remarks if Cruz becomes the nominee this issue will be taken to the courts. “Here’s the problem if for some reason [Cruz] beats the rest of the field,” Trump said. “I already know the Democrats are going to be bringing a suit. You have a big lawsuit over your head while you’re running. And if you become the nominee, who the hell knows if you can even serve in office?” Trump would invoke Lawrence Tribe, a liberal law professor who argues Cruz is ineligible to run. Cruz lashed back that this argument is wrong by pointing out that Tribe is a Hillary Clinton supporter who is scared for the general election to be Cruz against Hillary.

Another moment where Trump dominated the debate stage than previous debates involved Cruz explaining his recent remarks that the real estate mogul “embodies New York values.” During his campaign stop in the granite stop prior to the debate, Cruz in a radio appearance suggested Trump should change his rally entrance song to “New York, New York,” because Trump comes from New York and he embodies New York values. When ask to explain this recent remark, Cruz explained that New York values are ones who hold “socially liberal views that focus around money and the media” adding “not a lot of conservatives come out of Manhattan.” This line hit a chord with Trump where his response that came from the heart and ultimately won him the night.

“New York is a great place. It’s got great people, its got loving people, wonderful people. When the World Trade Center came down, I saw something that no place on earth could have handled that more beautifully, more humanely than New York,” Trump said as the audience applauded. “That was a very insulting statement that Ted made.” This response won the hearts of many New Yorkers and others everywhere on social media as Cruz was caught off guard to Trump’s praise where all he could do was applaud along with the audience.

As Cruz and Trump fight to win over the Conservative voters, the establishment lane is looking for a replacement as an alternative. Jeb Bush, who was seen one time ago to become the GOP frontrunner and the establishment pick is now struggling to gain momentum in his latest polls have Bush averaging 4% nationally.

As Cruz and Trump political friendship came crashing down with both clashing in heated memorable exchanges, Marco Rubio and Chris Christie would also clash on the stage as both are vying to win the establishment lane. Rubio began the attacks by hitting the New Jersey Governor for his past support of Planned Parenthood, common core and gun control when ask about his latest attack ads. “Unfortunately, Governor Christie has endorsed many of the ideas that Barack Obama supports, whether it is Common Core or gun control or the appointment of Sonia Sotomayor or the donation he made to Planned Parenthood,” Rubio said. “Our next president, and our Republican nominee cannot be someone who supports those positions.”

Christie lashed out on Rubio remarks by setting the facts straight all while using Rubio past debate remarks he used to criticize Bush for attacking him. “I stood on the stage and watched Marco rather indignantly look at Governor Bush and say, ‘someone told you that because we’re running for the same office, that criticizing me will get you to that office,’” Christie responded back. “It appears the same someone has been whispering in old Marco’s ear, too.” Christie continued on to deny the charges Rubio made while touting his executive experience in New Jersey. “See when you’re a senator, what you get to do is just talk and talk and talk,” Christie said. “Two years ago, he called me a conservative reformer that New Jersey needed. That was before he was running against me.”

Another tussle between Christie and Rubio occurred later on when Christie interrupted Rubio and Cruz exchange over the VAT tax policy. “I’d like to interrupt this debate on the floor of the Senate,” Christie said in the middle of a shouting match between the two Senators. “Remember everybody? This was a question of entitlement.” Rubio attempted to interject, but Christie would ultimately shut him down, saying, “Nah, You already had your chance, Marco. You blew it.”

If one thought the feud between the two young Cuban Senators was over because Cruz and Trump are feuding, guess again.

The smack down between Cruz and Rubio began in the last debate in which Cruz won the battle that inflicted damage on Rubio when it came to the issue of immigration. And the immigration issue returned to the stage in one of the last exchanges between Cruz and Rubio and political pundits claim this gave Rubio the strong finish he needed. Unlike previous debate, Rubio has been able to seize the spotlight by delivering cutting attacks to his opponents that evaluates Rubio as one of the winners. However, he failed to stand out Thursday night as Rubio lost a major opportunity to shine by letting Christie one-liners shut him out.

Towards the end of the debate, Rubio was able to rekindle the battle between him and Cruz by unloading a series of punches to Cruz stance when it came to the issues of immigration, trade and voting against the Department of Defense funding.

“Ted Cruz, you used to say you supported doubling the number of green cards, now you say that you’re against it. You used to support legalizing people that were here illegally, now you say you’re against it. You used to say that you were in favor of birthright citizenship, now you say that you are against it,” Rubio went on into a rant to paint Cruz as a flip-flopper. “I saw you on the Senate floor flip your vote on crop insurance because they told you it would help you in Iowa, and last week, we all saw you flip your vote on ethanol in Iowa for the same reason.” Rubio ended his series of attacks by stating it is “not consistent conservatism” but “political calculation.”

Cruz fought back claiming Rubio’s attacks are “flat-out false” adding a jab into the mix. “I appreciate your dumping your oppo research folder on the debate stage,” Cruz said in which Rubio replied back, “It’s your record.” He went on to blast Rubio for support immigration by siding with the likes of democrats such as Senator Chuck Schumer and President Obama. “Marco stood with Chuck Schumer and Barack Obama on amnesty. I stood with Jeff Sessions and Steve King,” Cruz said. “Marco supports legalization and citizenship for 12 million illegal. I opposed and oppose legalization and citizenship.”

Leftists and the Muslim War on Women