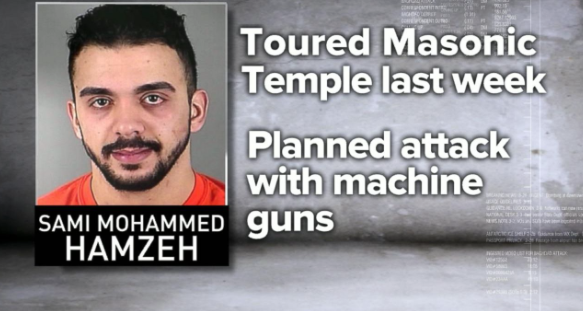 Milwaukee, Wisconsin – Tuesday, January 26, FBI agents thwarted an attack on the Humphrey Scottish Rite Masonic Temple. Samy Mohamed Hamzeh, 23, was taken into custody for being in possession of machineguns and a silencer.

Hamzeh had been under survelliance since September 2015. He was not charged with terrorism charges.

On January 19, 2016, Hamzeh and two confidential sources took a guided tour of the Masonic temple. In a recorded conversation Hamzeh detailed his plans:

“I am telling you, as I was saying, all three of us get in together, one will go, to the one that is staying at the reception . . . . If she was alone, it is okay, if there were two of them, shoot both of them, do not let the blood show, shoot her from the bottom, two or three shots in her stomach and let her sit on the chair and push her to the front, as if she is sleeping, did you understand? Then stay downstairs, the other two will take the lift to the third floor, go directly to the room, open the door, shoot everyone, move fast even avoiding the lift and take the stairs running down. . . Using the stairs, the third one on the door will notice us coming down, we will go out together. No one sees anything and no one knows anything. We leave, as if there is nothing, no running, no panic, just regular walking. We’ll get three head covers with three holes in them. . . .we’ll get in all three of us together, the minute we get in, we shoot whoever is in front of us, and all have to be eliminated. One stays down and two will go up quickly.”

Trump: "When someone crosses you, my advice is GET EVEN!"