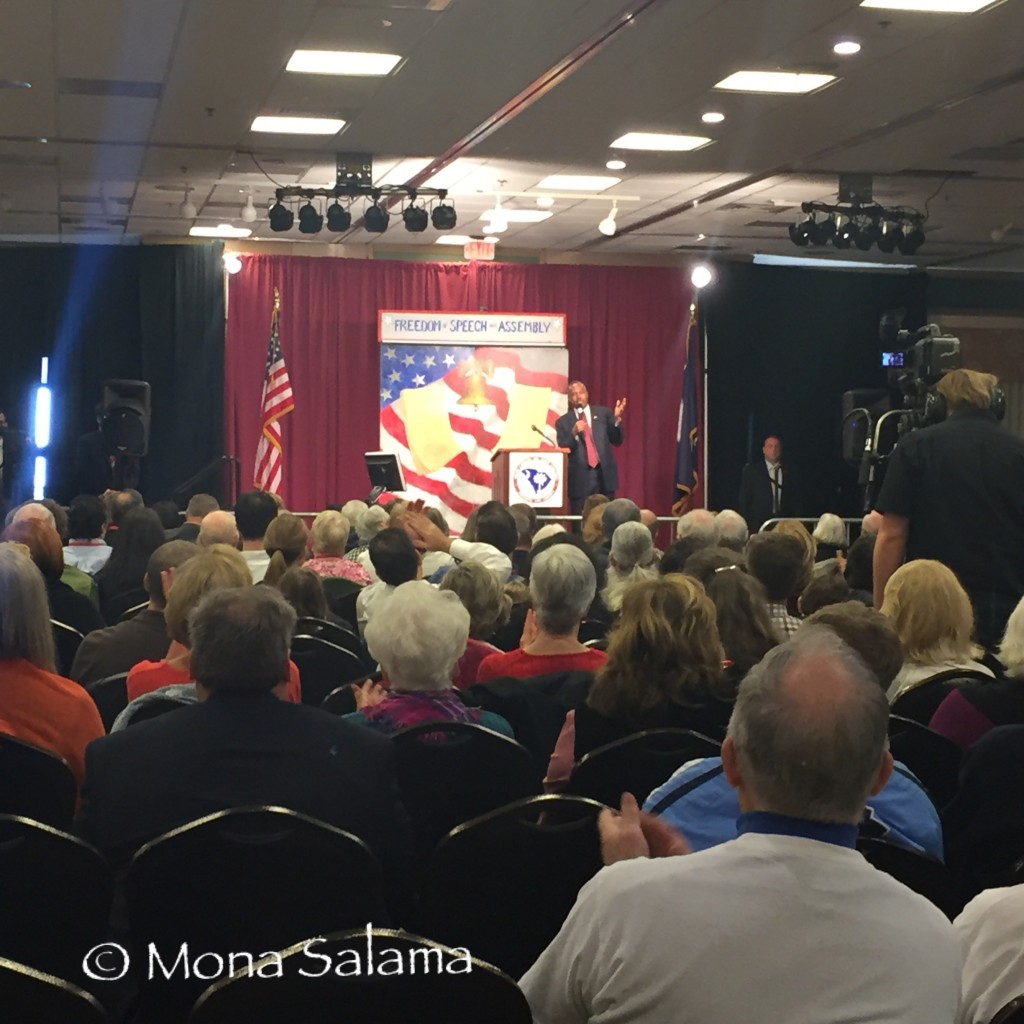 The final Republican presidential candidate, Dr. Ben Carson, addressed the South Carolina Tea Party crowd Monday morning explaining that running for the presidency was not in his intention however his decision was made by God’s direction.

“A lot of people came up to me and said ‘Are you sure you want to get into the political arena, that’s a nasty cesspool,” Carson told the several hundreds who attended the final day of the coalition event in Myrtle Beach, South Carolina. “No, I didn’t want to get into it, but I felt directed and I said ‘Lord, if you really want me to do this, you have to open the doors, and if you open the doors, I will walk through them – and he opened the door.”

The one time Republican front-runner focused his speech expounding on his recent flax tax and foreign policy plans. After the recent terrorist attacks in Paris and San Bernardino, California that was linked to radical Islamic group ISIS, Carson failed to provide detailed plans that ultimately led to sliding poll numbers. A shakeup in his campaign led to many of his former top aides resigning from their post due to internal conflicts. Carson, however is still consider a Tea Party favorite, but with Trump and Cruz also vying for the same crowd with less than two weeks to go to the Iowa caucus, questions remain if Carson can come from behind and win the early primary states.

Beginning his speech with a joke about how the media focusing its attention on the Powerball, the soft-spoken neurosurgeon declared that he already won the lottery solely for being an American. “Well you know what, I already won the lottery,” Carson said to loud cheers. “I was born in America and I know the lord.”

Carson continued his speech focusing on America being exceptional nation and we need to preserve it for the younger generation. “This is the first generation that is not expected to do better than their parents,” he said. “What does that say about what is going on with our nation.” Citing that there are “people who are destroying our future for our children” by government increase spending and lack of common sense, Carson points to his flat tax plan would reduce the national debt. “A 14 percent flat consumption tax plan with no exceptions, no shelters, no loopholes would encourage growth, which is important for a nation to reduce its debt.” He also said he would direct federal agencies executives to trim 2-3 percent from the budget that is considered “pork money” or risk getting terminated. “You have to treat government like a business in order for it to succeed,” Carson said.

On foreign policy, Carson attacked President Obama for supporting the Muslim organization group CAIR, who he said is connected to extensively with Muslim terrorist groups such as Hamas and the Muslim Brother. To enlighten the crowd’s mood, Carson cracked a joke of his mispronunciation of the terrorist group Hamas, where during the Republican Jewish Coalition in December, it came off as he was saying ‘Hummus’ and led to the media to focus on this instead of his teleprompter speech. “I have been waiting for commentators to ask me how to pronounce ‘Hamas.’” Carson added that America should “declare war on the Islamic state because they already declared war at us right now.”

After speaking for about thirty minutes, Carson took questions from the audience. One supporter asked Carson if he is too nice to become president in which the crowd erupted in laughter. “I have heard many people say, ‘You have to be more bombastic, and you have got to yell and call people names and jump and act like a buffoon,’” Carson replied.

“But I will tell you this, throughout my medical career, I have faced a lot of controversy and opposition, but still succeeded without being nasty, and I think we can do that running.”

Conservative Hollywood: What Changed Them?