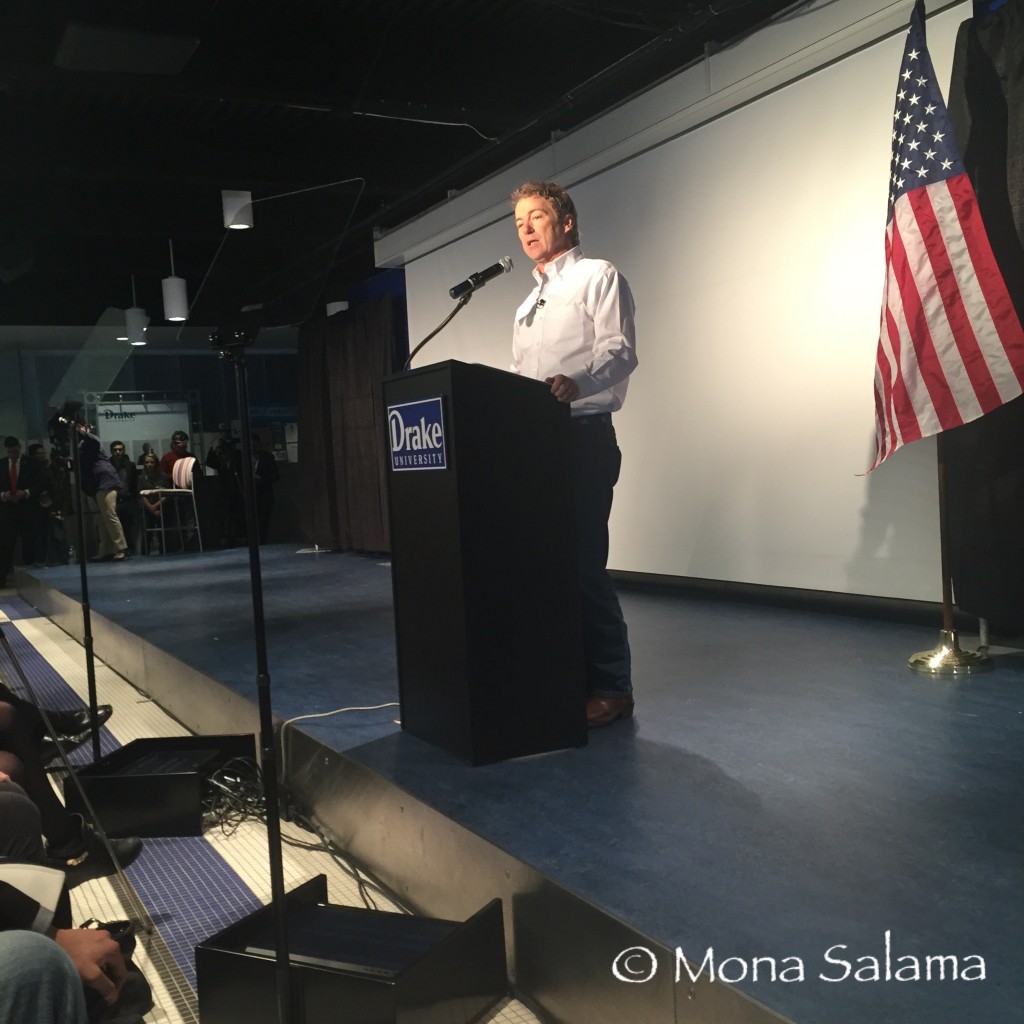 Just hours before returning back onto the main stage of the GOP debate, Kentucky Senator Rand Paul held a student rally where he spoke of his liberty platform.

Speaking to over 250 young supporters who filled the small area at Drake University in Des Moines, Iowa, Paul gave a speech focusing on liberty while adding quotes from literature and history making the case he is the only candidate for liberty and is the only Republican in this race that can help grow the party into becoming more diverse with issues that are rarely focused on.

“Are there any liberty lovers in this house?” Paul said beginning his pre-debate remarks. “I wanna tell you why Americans need to hear your voice.”

Paul is crisscrossing the Hawkeye state in the final days before the caucus. Alongside Paul was his wife Kelley, who sat in the front seat listening to her husband as students were loudly cheering her husband as he spoke. Students here at the rally made their voices be heard that Paul is their candidate of their choice. Cheers of “President Paul!” and “End the Fed!” broke out after every sentence of the senator’s half-hour speech.

Slamming both parties for infringing on ones civil liberty rights with “the left assaulting our Second Amendment of the right to bear arms, while the rights attacks the Fourth Amendment of the right to be left alone,” Paul states he is the only candidate that stands for the entire Bill of Rights. “Since the terrorist attacks on San Bernardino, the left calls out for more gun control, while the right calls out for more people control,” Paul said as the youth loudly shouts ‘President Paul.’ “The left calls for bans on gun sales, while the right clambers for the government to gather up all our records. I don’t know about you, but I say our phone records are none of their damn business.”

Paul continued on talking about the NSA bulk collection of data, a key issue in his presidential race to point out that these attacks hasn’t made us any safer. He slammed Marco Rubio for supporting the bulk collection that was ruled illegal. “Rubio wants to bring it back saying we can’t be safe unless we look at everything you own,” Paul said. “I say it’s wrong and I say it has to end. We need to protect your privacy.” He also slammed Ted Cruz position on the NSA saying he was plays both sides of the party just for attention. “Now Cruz claims he was with us for reforming the NSA,” he said. “But I think he talks out of both sides of his mouth. Did you hear his explanation in the debate; he said he voted for the bill to reform the NSA because he wants to allow the government to collect 100% of your cell phone records…and if he supports this then he greatly misunderstands the liberty movement.”

On the front-runner Donald Trump, Paul took jabs at the real estate mogul calling him “Gollum,” a character from Lord of the Rings, when talking about how Trump only cares about winning. “This race should not be about who can grasp the ring,” Paul said in reference to Trump being power-hungry. “Electing Gollum should not be our objective. This race should be about which candidate will best protect you from an overbearing government.” Paul added that Trump is “ignorant of the founding fathers’ restraint of power from the government,” and doesn’t understand the limits of a president power under the constitution. “Trump says if you give him power, he will fix America,” Paul said. “But you know, there is another tradition in America, the tradition that believes that power corrupts. Our goal should not be to gain power, but to contain power to limit presidential power.”

Paul adds on: “I am the only one on this national stage who really doesn’t want power or dominion over you. I want a government so small that you can barely see it.”

In regards to combating ISIS, Paul states all three of the leading candidates in this race wants to “carpet bomb ISIS.” “Ted Cruz, Donald Trump, Marco Rubio, they all tell you they want to carpet bomb the Middle East,” Paul said, leading to more boos from the crowd. “Cruz tells you he wants to make the sand glow. Trump says the problem is we haven’t been willing enough to use our nuclear weapons. I’m the only candidate that asks: will indiscriminating bombing of innocent civilians create more terrorists than it actually kills? Every time we use our military might to topple secular dictators; the results have been chaos with the void filled not with Jeffersonian democracy, but with radical Islam.” 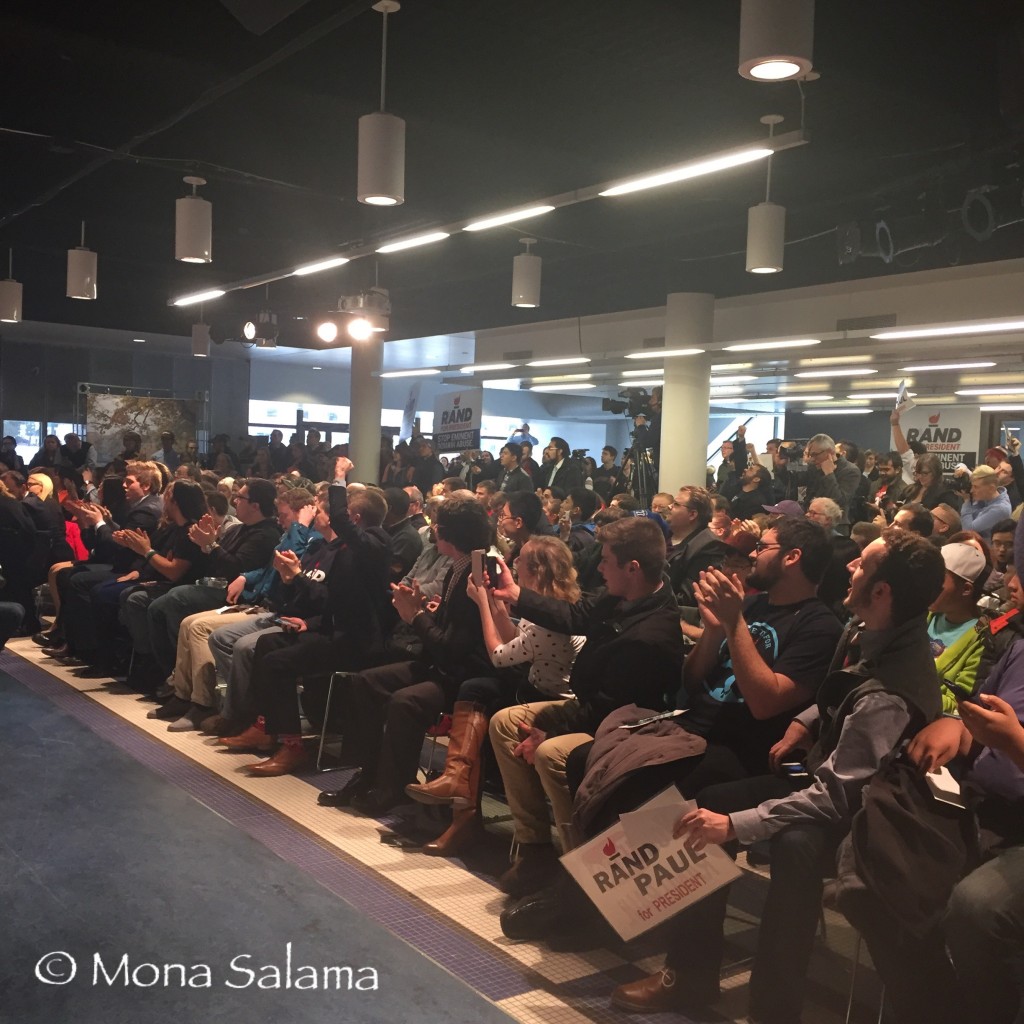 He continues on mentioning how the Iraq war cost billions with many of our military personnel either killed or injured and as president he will never put our military in harms way for a war pointing out to the Reagan Doctrine that war is the last resort, not the first and constitutional appropriate when declared by Congress. “All of the other candidates offer macho rhetoric, fear mongering and perpetual war,” Paul adds as the crowd cheered to ‘No more war.’ “Rubio says we should shun Putin, Kasich said we should punch Russia in the nose, what ever that means, Christie said he is ready to shoot down Russian planes currently flying over Syria and Iraq. And yet no one asks what’s next. On the stage, I call for a realist foreign policy where we stand strong enough to deter any attack, but not eager to start World War III.

Unlike other candidates who speak to an older audience crowd, Paul’s campaign weapon is the youth vote as his campaign has set up 10,000 students for Rand rallies as an innovated way to gather new votes from students that can ultimately change the dynamics of voting. As most of his rivals are place their campaign bets on the evangelical votes in Iowa, Paul is aiming at look elsewhere to garnish the votes from young students during a time when the caucus and school session take place the same time, thus making it easier to bring the youth turnout much higher than in previous elections.

In 2012 Paul’s father, Ron Paul, received 48% of the youth voters, coming close behind Mitt Romney and Rick Santorum in Iowa.

Paul’s campaign told PolitiChicks not to underestimate Paul’s presidential bid just because the media isn’t covering it. “We have organized all across Iowa on campuses, we are recruiting our Iowa 10,000 college students to the caucus, so our grassroots efforts are strong,” Paul’s campaign said. “We organized over 1,000 precinct captains throughout the state which

Currently, Paul is roughly in fifth place in Iowa, but his campaign believes the youth supporters will make a difference that will shock everyone. Over the weekend, Paul is set out to bring the big guns to help him in the final stretch. His father and former Rep. Ron Paul, who came in third place in the 2012 caucuses, will be joining alongside the Senator in efforts to win the Iowa caucus and create an upset to the media in its predictions.