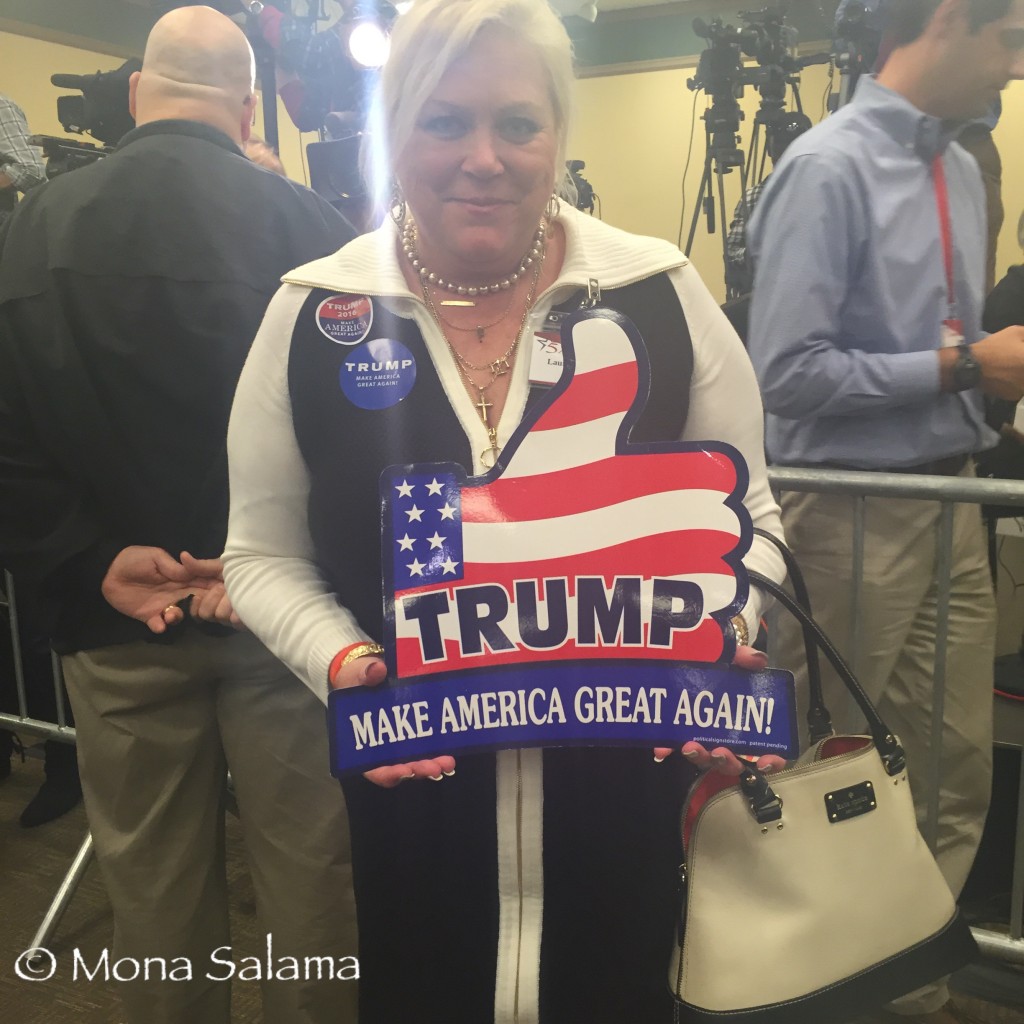 Trump’s speech drew many cheers and applauds as he was less restrained on attacking Tea Party favorite Ted Cruz. However, at the end of his 45-minute speech, Trump would take a shot against Cruz and the crowd wasn’t pleased. Mentioning news reports about Cruz’s undisclosed loans that he failed to report on election filings didn’t play well with many of Cruz’s hardcore supporters.

“[Cruz] didn’t report his bank loans,” Trump said to the Tea Party crowd in Myrtle Beach on Saturday. “Say whatever you want, he didn’t report his bank loans and then he acts like Robin Hood.” Before Trump could add to the sentence “Cruz is a very nice guy,” many from audience members who wore Cruz shirts began to boo the comment they heard from Trump. One Cruz supporter shouted, “show us proof” simultaneously with the loud boos. 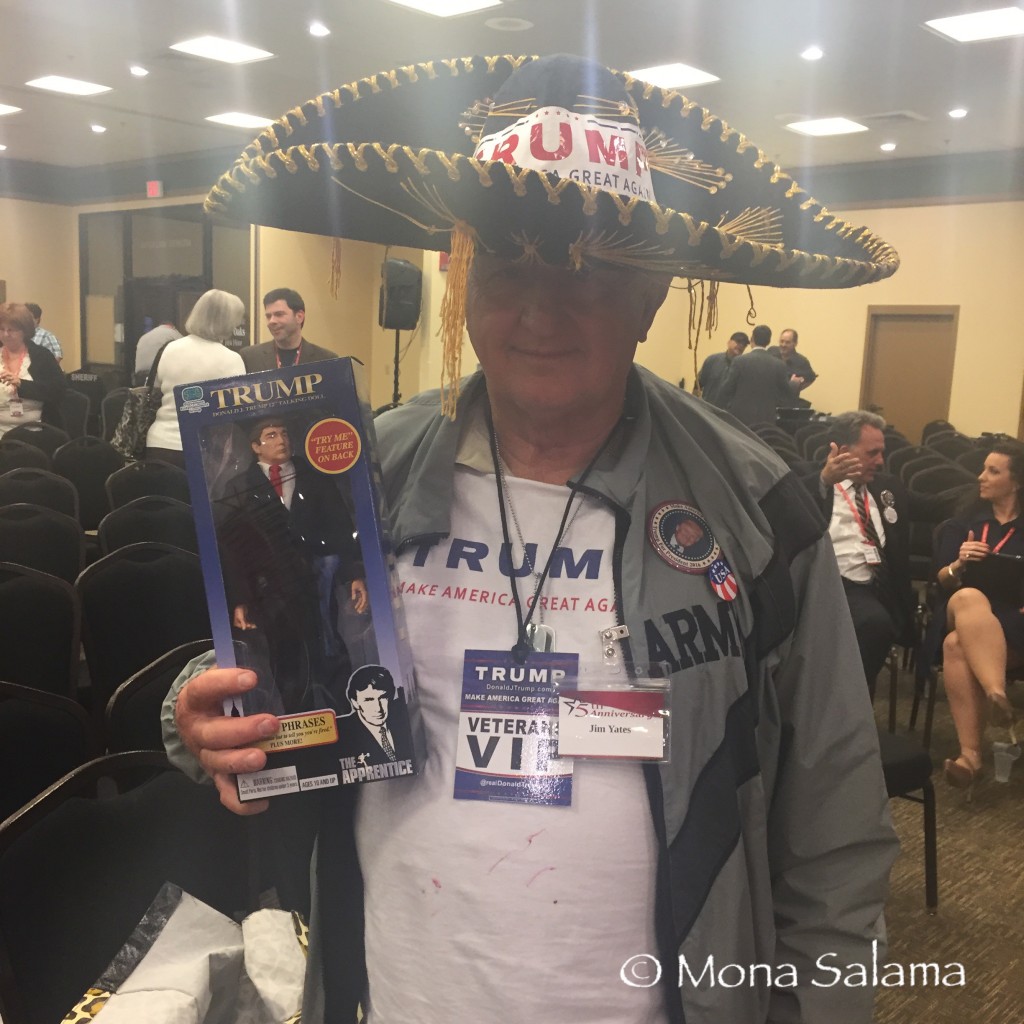 Over a thousand Tea Party attendees filled the small ballroom held in Springmaid Beach Resort where the activists in attendance are equally divided between the top two leading GOP contenders. Two hours earlier in front of the same audience, Texas Senator Ted Cruz took to the stage, rallying the active crowd with cheers with his speech that focused on conservative issues near and dear to the Tea Party. Cruz urged the crowd to examine each of his GOP rivals records with a seven-point checklist to voters to use to determine if a candiate’s action speaks louder than words.

Trump took the stage two hours later to the same audience, where he focused his speech on his business record and experience as well as his anger at the current president. Going into details about rebuilding the Wollman Rink in New York City, Trump explained his experience of this project that was under budget and ahead of schedule shows that he is capable of fixing this country’s problems. “We can do the same thing with our government on a huge scale,” Trump said, as the crowd roared with approval.

Both Cruz and Trump appeal to grassroots Republicans, many who are angry at the establishment Republicans and Washington D.C. Even though Trump is current leading in national polls, right behind him in second place is Cruz. At the Tea Party gathering, many who traveled hours to attend said they are admired both candidates with many stating either or is their top two choices. Outside the Springmaid Beach resort, more than 100 bikers waving Trump campaign signs as they waited for Trump’s cavalcade SVU to enter the convention center.

“Tea Party people are amazing, dedicated wonderful Americans, and they want to see good things happen,” Trump began his speech that excited the audience. “They want to see this country get strong again, to be great again, pay less taxes, make the dollar stretch better, have strong borders, and protect the Second Amendment.”

Before the coalition even began, News outlets reported the release of four U.S. prisoners in Iran in exchange of a prisoner swap where U.S. is dropping charges against seven Iranians convicted in the U.S. for sanctions violations. Trump during his speech took credit for the release of four Americans held captive in Iran. “So I have been hitting them hard and I think I might have had something to do with it,” Trump said. “First of all, it should have taken place three or four years ago. Did you ever see an agreement take so long as this agreement? Should have been done in the beginning.”

Throughout the campaign trail, Trump has castigated the Iran Deal, continuously using this portion in speeches to call President Obama and Secretary of State John Kerry an incompetent negotiator. “President Obama is the worst negotiator I ever seen,” Trump said. “Except when it comes to negotiating with the Republicans.”

Taking jabs at Jeb Bush as well as South Carolina Senator Lindsey Graham, Trump said he only brings this issue up because Bush is spending millions on attack ads against him. “Jeb has spent $69 million dollars so far,” Trump said declaring he spent most his money with attack ads against him and polling low. “Wouldn’t it be great if he could give that money to the wounded warriors instead of wasting it.”

Graham who ended his bid for presidency before Christmas recently endorsed former Florida Jeb Bush for President a day after the Fox Business debate last week. In response to this, Trump said Graham’s endorsement adds zero voters to Bush’s campaign. “Lindsey is going to give him all of his people and you wanna know what is that? Zero!” Trump said as the crowd applauded and laughed. “Everyone is going to say huh, Bush went down, which is hard to do when you are at three.”