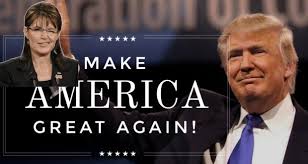 Ever since she rose to American political stardom in 2008, when John McCain chose her to be his running mate for his presidential bid, former Alaska Governor Sarah Palin has been respected among Republicans. A staunch conservative on a number of important social and fiscal issues, the married mother and devoted family woman also embodies the responsible personal image that is so important to people on the political right. And even though her run with Senator McCain was not successful in ’08, she has remained active in American politics, becoming a published author and frequent commentator on conservative news stations.

In the current presidential race, Palin has not sought her own candidacy (as is the speculation every four years), but her endorsement has been sought after by conservatives all over the GOP. Recently, she made her decision, and chose to throw her support behind the Republican frontrunner, Donald Trump. This has been an enormously significant political news story, as it solidifies the place Trump has earned as a solid conservative figure – Palin would never give him her blessing if he weren’t.

But as symbolically important as it is to Trump to have Sarah Palin on his side, the endorsement isn’t likely to affect him directly all that much. Again, Trump had already taken a conservative spot in the GOP, and while his supporters will surely be delighted by Palin’s support, they won’t be surprised by it. Neither will most people still making up their minds about whom they will back in the contentious Republican primaries.

Where the effect of Palin’s endorsement of Trump will surely be felt, however, is in the camp of his rival, Senator Ted Cruz. Cruz has risen to a strong second for the Republican nomination, and he has strong momentum going into the crucial Iowa and New Hampshire races coming soon. While Trump still leads in the polls in those places, Cruz is a serious contender, and if the Senator were to prevail in the important early voting states, it could set a tone for the rest of the GOP primary season that would prove challenging for Trump. But the reason Cruz is so well poised to challenge the frontrunner is because of his own potent conservative credentials, and as a result of those, speculation was high that Sarah Palin might choose to endorse him. That didn’t happen, and her decision could be interpreted as a black mark – even a snub – against Cruz.

In fact, most political analysts now are seeing Palin’s Trump endorsement more as a detriment to Cruz than a direct bonus for Trump. A blow to the top rival is just as good as a gain for the frontrunner,  but it’s interesting to consider that even Ted Cruz – not leftist by any definition – may not be conservative enough for Sarah Palin.

Assuming that the fallout from Palin’s announcement helps Trump secure the nomination, he would do well to consider asking her to be his running mate, just as John McCain did against Barack Obama. Though McCain was defeated in his race,  it is generally accepted that Sarah Palin’s presence on his ticket boosted his support with the important moderate female voter demographic, people who otherwise gravitated toward Hillary Clinton. As Clinton is likely to be the Democratic nominee, the battle for women voters is sure to be a crucial one again, and Palin could prove a powerful ally in that struggle.

Of course, the election is still most of a year away, and a lot has yet to happen between now and then. It’s too early to make responsible predictions about the outcome. But the fact that Sarah Palin has now endorsed Donald Trump can only benefit the GOP frontrunner, both directly, in a modest way, and by dinging his chief competitor in, perhaps, a very significant manner indeed.