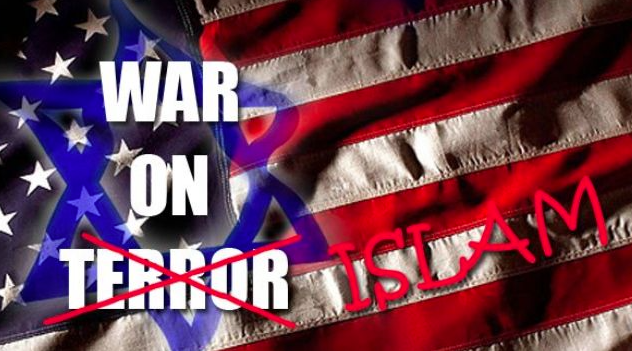 All wars are wars of equals.

That’s true in the sense that each side attacks the other in terms of how it defines itself as an entity. States try to destroy other states. Religions fight other religions. Ethnic groups and races engage in genocide. They do this even when the other side does not see itself in the same terms.

The modern multicultural super-tolerant western state of this century takes stock of its strongest point, and decides that it’s not the old industrial machine, which destroys the environment, its traditional heritage, which is problematic, or its problem solving skills, which are too technical, but its values of super-tolerant multiculturalism. And so it wages war on those insane terms.

When liberals take every terror attack as an opportunity to lecture us on the vital importance of not losing “our values”, they are in their own warped and useless way waging war.

In the 20th century, war was distilled down to an industrial core. In the 21st century, the anti-industrial rebels who want to de-industrialize manufacturing while industrializing society, have distilled all that matters down to their values. In their confused world order, the terrorists are attacking “our values” and we in turn must attack “their values” with our superior “values”.

And also it’s a natural human shortcut. It’s human nature to assume that people different from you are just dumber, nastier versions of yourself who have the same basic goals and organization as you do.

Ideologues are most likely to assume that everyone agrees with their premises, but just hasn’t been shown the right textbooks. And these days ideologues and their textbooks dominate everything.

The left plans to defeat ISIS with “our values” by which it means showing how effective our social harmony is, which it isn’t, by refusing to actually fight Islamic terrorism. Eventually the Jihadists will give up their reactionary ways as the ordinary Muslims realizes that he has the same interests as the rest of the great rainbow coalition does. This hasn’t even worked too well in Europe.

At the ground floor, Islam is tribal. The Iraqis viewed us as the American Tribe. Tribes raid each other. Their members lash out and kill each other over insults. They count coup on each other. They steal and humiliate each other’s women. Tribes are nomadic and they are concerned with honor.

Tribes from Iraq, Syria and North Africa can come to Europe, set up their own territories, pile up loot and then humiliate the native women for New Year’s Eve. And then laugh at the impotence of the European tribal authorities.

The Islamic no-go zones are seen primarily as religious, but they are also tribal. Islam incorporates both. Islamic migration also expands tribal territories. It’s always been that way.

And this is also how Muslims fight us on a tribal level. They attack the honor of the European tribes. But it’s not as if the Merkel government or any of the other European Socialist governments have any concept of honor anyway.

While European Socialists attempt to integrate them with “our values”, the ungrateful integratees show that the systems have no honor on a tribal level and are not worth taking seriously.

Beyond the tribal, is the religious. In Islam, religion remains limited to the most primitive level of “My tribal deity Allah is stronger than your deity because we beat you up.”

This is literally what Allahu Akbar means.

To the representatives of the secular West, religion is identical with “our values”, which is to say that it contains nothing religious about it, certainly no claims which require divine validation or unique truths. Their religion is a spiritual background noise which affirms the essential position that we should be nice to each other while providing support for any leftist position of the moment.

No meaningful dialogue is possible between Allahu Akbar and “Our values” because the two are not speaking the same language except in one sense, both insist on absolute submission. But the left’s demand for submission is based on the absolute moral superiority of “Our values”. Islam literally means submission, but its moral superiority is a revealed truth based on Islam’s military victories.

Islam is right, because it won. It won, because it’s right. There’s your cycle of violence in a nutshell.

Islam sanctified the tribal raid as a religious act and turned the dead into martyrs. That’s Jihad. Terrorism incorporates both the tribal and the religious. Islamic missionary activity in the West also targets dissatisfied minorities, potential fifth columns, in the same manner as the original Arab Islamic conquests did. Even here, Islam unites tribal and religious tactics.

The final element of the tribal war is organizational. It is here that Islam attacks “Our values”.

Tribes are forever quarreling. They are weakest at their points of mutual association. This is how Mohammed originally got his start. Islam expanded initially more through clever games of divide and conquer than military strategy.

To the Muslim mind, we are a series of fragile tribal associations. That is also how we appear to the “Our values” left. The “Our values” crowd thinks of the threat in terms of “radicalization”, but the real threat is “integration”. Mohammed did some of his best work by undermining from within.

To undermine a tribal association, you have to be a part of it. Then you have to raise grievances, find other dissatisfied allies and eventually promise them better treatment under Islam.

That’s what Mohammed did. It’s what his followers are doing today.

This is where groups like the Muslim Brotherhood play the long game while ISIS plays the short game.

The left’s multicultural vision made this mess possible. It’s also making it worse. The left despises tribal thinking and yet its entire political infrastructure is built on rewarding it. All Islamic organizations have had to do is built on the left’s own work, joining its coalitions as Islamic groups, and then working to hijack them. The growing takeover of #BlackLivesMatter by Muslim groups is one example of the phenomenon.

Our enemies are not states and they will not fight us as states. To the extent that they are tribal, they will fight us as tribes. To the extent that they are religious, in a primitive sort of way, they will attack us that way. But the real problem is that we are no longer states either. Instead we are in the grip of a mystical deluded cult that squawks of “Our values” while tribalizing and dividing us to push through discredited economic and social policies. They have opened the gates to a cruel, backward enemy.

And in doing so, they have brought a tribal war into our own homelands.

Diversity and Multiculturalism: Longing for “The Other”