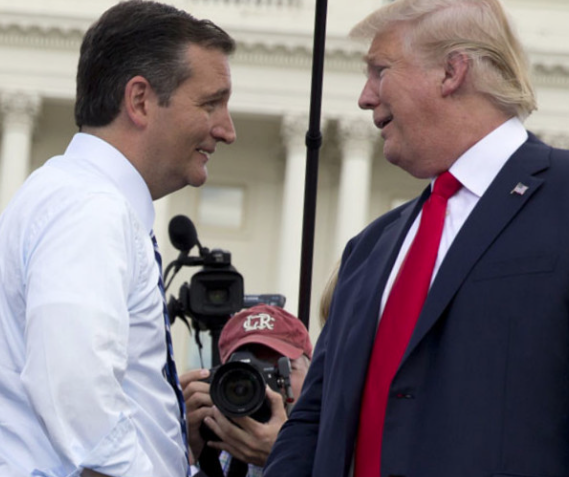 Both Cruz and Trump are great candidates, there is no doubt. When you hear either of them speak you think finally, we have the brightest GOP presidential lineup we’ve had in almost a decade. Unfortunately we are all falling into that trap again set up so well by the media, by the bloggers, journalists, the politicians and the left.

What is it? Stabbing each other in the back.

People have been asking me for months, “Who do you like? Who is your favorite?” I’ve answered, I do have my favorites but I’m going to continue observing and see who is the one diligently looking at the prize and moving forward when others will get their feet stuck in the mud forgetting that crawling is the best way out.

I love both candidates. I believe both are on the ball. Trump and Cruz, Cruz and Trump.

As a New Yorker, I began watching Trump as the “builder/developer guy” in the mid 80s.  He was one of the very few non-Jews with big dreams who everyone was laughing at in NYC because of his big mouth, and many criticized him because of his immigrant wife–but they certainly didn’t mind taking his money. For charities, for their payrolls, for the pizazz he brought with the paparazzi wherever he went. Trump became a NY icon, this white, poofy haired blonde from Queens. He played big and hard but he stayed on the ball with his eye on the prize. Privately (which also became public), we New Yorkers watched his family life, his kids and how he treated them, with respect and love and he never forgot that family is first in all his interviews.  After his very public affair with Marla Maples, Trump stayed pretty quiet during his divorce from first wife Ivana. Even then, after they divorced, they still remained cordial enough to stay under the radar, putting their family’s well being first. Donald’s children have earned their education and have been placed in entrusted positions with wisdom to run their company successfully and not just be trust fund babies who will throw it away.

From what I’ve personally observed, Donald Trump always had values. They may be “New York City values” but we are talking the old New York City values, where you help the guy who fell down next to you, or help that lady in the stroller down the stairs, or walk the little old lady carrying her grocery bags across the street. In addition, Mr. Trump was never known to party. To me, as loud as he was, he always seemed to value life and to make fun of it, never losing the sight of family and friends and trying to do his very best to make that possible. And yes, the older he got, the more loud he became about what was right and wrong.

As a young man, Trump was not born with a silver spoon, working hard to get deals done, having to deal with thugs in the construction building industry, including mafia, the unions and teamsters. It was a hard climb. Then he got flack for marrying an immigrant, something I personally heard whispers of in the social upper WASP circles. Trump was never a part of the system; he fought hard and won his own place. One has to admire that and he is still fighting the system. He is fighting our corrupt governmental system.

Then there is Cruz. I love this guy. He’s a gentleman. He has a great sense of what we Americans have lost in the past decade: the loss of security, the loss of being able to take care of our families without worrying if someone gets sick. The support that we Americans should be getting when we come back from war or when we are in need because we have to take care of all the illegals and criminals first. The ridiculousness of some of the liberal groups regarding religion, abortion, birth control and more. He understands the 2nd Amendment issues that are being manipulated by our government and politicians so that they can look good but don’t do anything to stop the cause of the murders that do go on. The mental health system and the health system where we are taxed if we don’t buy it and if we have it, we can barely afford it.

We can see that Ted Cruz is a well adjusted individual with firm values and as a Christian I can see that he leads with Christ in his heart. I admire that, he is a fighter.

Both Cruz and Trump have shown us how angry they are. They are angry with what’s happened to our country, angry that we have become almost like a third world country but still pretending to be rich and giving our money away and placating to despots and terrorists or pretending they don’t exist.

I think people are forgetting that the focus in a presidential race is to win. Yes everyone has their preferred candidate but they need to look at the bottom line. Trump said we need to see who is electable; who can win. Who can get people to vote other then just the conservatives/GOP. We need the middle class, the young folks struggling for a college education, the former Democrats and everyone in between to come vote.  We need the down trodden, the seniors, the Vets, and blue collar workers–those are the people who have lost the most, living paycheck to paycheck.

What makes me mad is when I see people on our own side who criticize our candidates so vehemently and maliciously, taking cues from gossip-style articles in order to make the other one look bad.  (By the way, many of those articles are written by Leftist bloggers, following Alinsky’s commands…)

On the other hand, Cruz and Trump have both brought up valid points in regards to each other and instead of criticizing, I hope people will do their own research and search for the truth.  But they need to listen to each other as well.

Bottom line, I admire both Cruz and Trump and in my eyes, they are a tie.

So I recommend that everyone pay close attention to the marketing power of the Democrat Party. They will use every bullet these candidates shoot at each other as their weapons. Instead of criticizing our top 2 candidates, let’s focus on criticizing the Democrat weapons that have almost killed our society. Debate all you want about who is better but electability is what will count in the end.