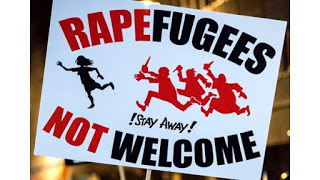 Big Feminism, fresh from fighting pitched battles against swimsuit posters in European subways and other phantoms of “rape culture”, failed the women who were attacked by violent Muslim migrant mobs in Cologne, Berlin and Hamburg who were the products of an actual rape culture dating back to Mohammed’s injunction to his men that Muslim women must wear burqas to avoid being “molested” while non-Muslim women captured in the House of War could be raped by Muslim Jihadis at will.

Big Feminism has a great deal of interest in rape as an abstract idea that can be unpacked to represent everything the left hates from Valentine’s Day to environmental degradation to the college frat, but it has little interest in rape as a crime or rape victims as people. Eve Ensler exploited the idea of rape to build up her brand while her PR was being handled by Trevor FitzGibbon, a progressive sexual predator who was also representing Julian Assange, another progressive rapist. Eve Ensler had a great deal of interest in rape as an ideological tool, but none in the women who were raped by her allies.

Feminism is only another of the many manipulative masks that the left wears. Its acolytes cannot see rape as a personal crime, only as an ideological one. To the left, rape, like racism, is a form of institutional oppression practiced by the stronger white male against everyone else. Sexual assaults that don’t fit this structural template won’t be acknowledged and when they become so public that they must be acknowledged, it will be only to change the conversation.

That process is already underway in Germany as feminists insist that all the coverage of the Muslim rape mob attackers (a coverage that took place despite the best efforts of their left-wing colleagues to bury the politically incorrect story before anyone had even heard about it) is distracting attention from domestic sex crimes. The obligatory feminist protests emphasized opposition to sexism and racism, but they did not mean the form of racism that led large numbers of asylum seekers to see native women as fair game to be abused, degraded and spit on, but the racism involved in calling them out for it.

The hundreds of women who were attacked in a single day by Muslim mobs are inconvenient victims. Like the Peace Corps workers abused by the locals or female activist raped by the Palestinian Muslims they came to help, their stories don’t fit the intersectional paradigm and have to be covered up in a politically correct burka.

Big Feminism joined with the left in crying for the migration of a horde of young Muslim men from a culture where sexual assault and harassment are ubiquitous to the cities of Europe. Feminism forcibly introduced the women of Europe to their rapists and then left the grinning mobs to get on with their work. Now it complains that the women it victimized are a distraction from the much more important conversations it would like to have about convincing everyone to fight rape culture by buying forty dollar “I Am a Feminist” t shirts.

Underneath feminism is the rotten leftist creed that all evils originate with the West. It is as impossible for a mainstream feminist in good standing with the political sisterhood to acknowledge what truly happened in Cologne and commiserate with the victims as it was for a Communist to admit that there was no food because a centralized bureaucracy of senile Socialist civil servants is not the best way to run an economy. They cannot even truly admit the crime until they have redirected the blame to that old standby boogeyman on which all Muslim atrocities since the Gates of Vienna have been blamed; failure to integrate due to European intolerance.

Big Feminism’s refusal to advocate for women outside the narrow ideological framework of the left is not a new phenomenon. It not only provided politically correct predators like Bill Clinton and Ted Kennedy, not to mention a legion of lesser known names like Planned Parenthood’s favorite politician Bob Filner or Trevor FitzGibbon, with a blank check for their crimes against women, but actually endangered women across entire cities and countries.

Feminist opposition to rape had already been compromised by the left’s pro-crime platform leading it to reject sentencing solutions that actually worked. The left’s multicultural components isolated the focus on rapes where the perpetrator was likely to be a straight white male. The high rates of sexual assaults in housing projects or tribal reservations had to be ignored unless, as with the Violence Against Women Act, there was some gimmick for using them to indict white men.

While white men are certainly capable of committing any crime, feminism’s refusal to cross intersectional third rails at best abandoned countless women of all races and groups to the abuses of politically correct predators. At worst, Big Feminism aided and abetted their rapists.

This indictment is not uniquely directed at feminism. Liberal Jewish and Christian groups, alongside gay and feminist groups, vocally advocated for the entry of millions of Muslim migrants whose contempt for women’s rights was only exceeded by their loathing for Christians, their seething hatred for Jews and their violent distaste of gays.

Gay, feminist and liberal Jewish and Christian groups worked overtime to fill their countries with the demographic most likely to commit hate crimes against them. Like Big Feminism, these other arms of the left sold out the groups they claimed to represent for the larger agenda of the left.

Feminism doesn’t exist to help women just as credit cards don’t exist to help you save money. That is a service they provide on certain specific terms buried within voluminous documents to solicit paying customers. Like your bank, feminism may occasionally help women within very specific intersectional terms buried within its social justice documentation. Banks serve their shareholders, not their customers. Feminism serves its leftist shareholders who want earnest young female college students and a hundred other identity groups to feel that there is a face of the vast multinational Big Brother left looking out for them. As hundreds of European women found out on New Year’s Eve and in its aftermath, that is a lie.

The left does not help women. The left only helps the left. Beneath the slick advertising, the artsy designs that lend the illusion of the personal to the impersonal and the touching video narratives is the soul of an ideological machine whose acolytes are trained to allocate empathy in tune with a rigid set of rules that are as inflexible as any Soviet commissar’s handbook. The left is not in the business of caring, but of coordinating, and it exploits empathy to gain recruits only to mandate the things that they are allowed to care about in a coordinated ideological fashion.

Big Feminism, along with the rest of its leftist partners, created the conditions that led to the Muslim attacks on women on New Year’s Eve. And feminists are leading the cover up of the crisis they caused and continue to worsen by advocating for even more refugee admissions.

As long as feminism remains a slave to the left, it will be responsible for causing more women to be beaten, assaulted and raped. And then it will cover up the crimes and use the victims to sell more red t-shirts.

As Cologne, where hundreds of women were assaulted in one day, reminds us, a feminism in thrall to the left is one of the biggest threats to women.