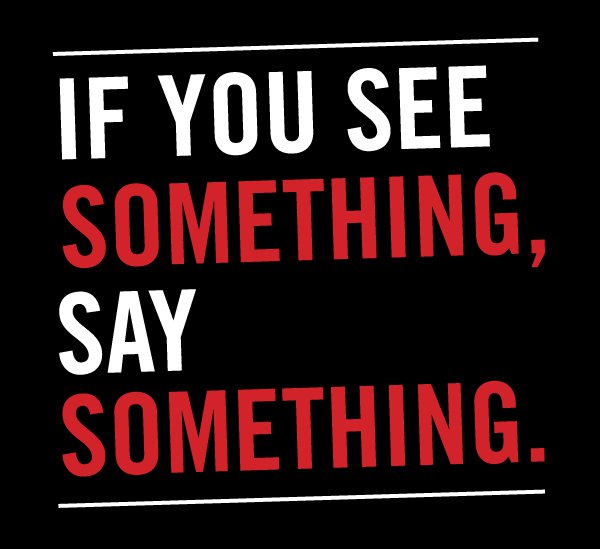 I admire and respect our policemen and women. I grew up in a police state where merely saying “no” or looking defiant could lend you in prison. I was strip searched and cross-interrogated by KGB agents after my unsuccessful attempt to escape. I was sixteen-seventeen then… It took me years to overcome the fears of police and realize that in a republic, in a democracy, police is there to help us.

Some time ago, I called the local police station because a gang of youths gathered on a bench in front of my house smoking weed and getting drunk. It had happened before but never to such an extent – there were four cars and about a dozen young men. Once they start coming here, there will be no end to it… thought I. I had noticed gang graffiti before – on the wall and lampposts, and even on our fence. I had the number to the Sheriff’s Station on the fridge (just in case) as we had received it in mail several years ago. I had never dared use it before.

So I called. After stating my full name and complete address, the rough matter-of-fact female voice at the other end asked:

“How do you know they are doing drugs?”

I was silent. How did I know?

“How can you tell it’s drugs?” she insisted.

“I don’t know. It looks like drugs to me,” I said. I have had no experience with drugs in my entire life, but the strong order of skunk coming over from the bench certainly was not that of cigarette smoke. It looked to me like they were doing more than just smoking weed but it was dark and I could not tell. “They are drunk, too,” I said, “drunk and loud.”

“How do you know?” the voice barked at me.

Suddenly, I felt under pressure. I was being interrogated. From the ID and other crime shows I knew that all such calls are recorded. I realized that I had to state my full name and address at the beginning of the phone call. Something in me shivered. I began to feel sorry I called.

“I don’t know. It’s just a gang of young men, being loud. It’s after 10pm, they don’t live here, they have no business to be here at this time,” I said. My voice was apologetic and all I wanted was to say I was sorry and hang up.

Finally, after inquiring about the cars, number plates, sending me out to the garden to peek at them and count them and attempt to define models and makes and colors of the cars, the voice said: “We will look into it,” or something like that and hung up.

Uff! I was more scared than before. First, I was afraid that she was looking me up, a police car would stop in front of our gate and I would be the first they would question. Second, I was scared that that they would actually go to the gang and question them and say that someone saw them doing drugs and reported it to the police. Obviously, it would have had to be the house closest to them where the lady came out peeking at them through the fence two or three times… Third, I just felt plain stupid that I was complaining about something that no-one else cared about. After all – it’s a free country.

I waited for the police to come, rationalizing: Should I call more often so that they get to know me? After all, the community should know who is policing them and vice versa… On the other hand, they are probably too busy with more serious crime and issues… These young drunks did not mean any harm…

I live in a very nice and safe neighborhood in Los Angeles, but there have been gangs on occasion even here, marking their territory. A house in the next-door street was burglarized last year and I sometimes do see cars and individuals who “do not belong.” Loafers sometimes throw empty bottles of alcohol over the fence or leave them with urine in the flower-pot wall surrounding our front yard.

On the other hand, you cannot call police with every grumble… if it is not a matter of life and death, I suppose one should leave it alone. Think about the woman who lived next door to the San Bernardino killers and noticed “suspicious activity.” Had she called the police station, she would have been asked similar questions:

When you see something…

In my case, it was worth it, at least from what I saw. At first, one police car came, then another, then another. Before midnight, there was a string of Christmas lights of blinking police cars in front of our house. They took them all in, one by one. It took about an hour, maybe two, before everyone left. Their cars were hauled away later in the wee hours of the morning.

I heaved a sigh of relief – and – justification. My slate with the local Sheriff’s Office was clear. Clearly, they were not just a gang of innocent guys getting drunk…

They have never showed up again and I have not seen any more empty alcohol bottles in my front yard. I just hope no one told them who was behind this midnight raid.

Final advice: when you see something, prepare yourself to be questioned about what you saw! Get ready, calm down, and realize that it is going to be an official, recorded phone call with a busy military-type interrogator. They are not out to get YOU, although they may sound like it. It might be difficult for you, but who said keeping US safe is going to be easy and painless? We all have to do our share.

Liquor Store Clerk Brought A Gun To A Gun Fight