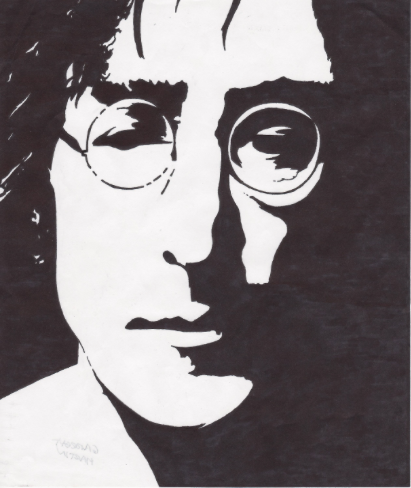 December 8, 2015, marks the 35th anniversary of John Lennon’s assassination. I miss Lennon’s voice of reason and compassion. I find myself wondering what he would say about the chaos and violence in this world today.

John Lennon’s death left this world a little darker for me. Appreciating his work was one of the ways I had survived the murder of my father when I was eight. I related to the fact that he had a rough childhood and I saw him as someone to look up to.

When John Lennon was assassinated I was a lost 23 year old. But John was an inspiration for me to survive my own madness. I loved his wit and humor and his effective lyrics and melodies. His ability to speak directly and succinctly about any subject has always been a great example to me.

Many times, when I grew frustrated about petitioning members of Congress to establish a select committee to investigate Benghazi, I would play a song by John Lennon and become reenergized. John Lennon taught me that a musician can have a voice for change and to not be afraid to speak out against the forces of darkness. Whether those forces of darkness are personal or political does not matter in the larger scheme of things. The real point of Lennon’s example is to pursue life with an active element of courage in your arsenal.

John Lennon was an example of what it is to be a true patriot. The music of America informed his rhythmic soul and he truly loved his adopted hometown of New York City. He fought hard to stay in this country and received his green card to do so. He actually sued members of the Nixon administration, including Attorney General John Mitchell, when it was discovered that they were trying to deport him without proper procedure and were denying his right to due process.

He was an example to anyone seeking the right to American citizenship by going thru the correct procedures to do so. I appreciated his lack of whining and his lack of a sense of entitlement because of his celebrity. He merely wanted to be treated fairly.

On the day he received his green card Lennon was asked if he resented John Mitchell and the members of the Nixon administration for the trouble they had caused him. Lennon replied, “Time wounds all heels.”

When I contemplate the importance of John Lennon and my love for him I have to ask myself, what would he think about the world today?

I truly think that Lennon would have been angered and puzzled by ISIS. I doubt that John could relate to any cult that instructs it’s followers to kill anyone who does not believe as they do. The limitations of that point of view would have left him scratching his head. Maybe he would have sent the members of ISIS a collection of Chuck Berry’s greatest hits. True Rock & Roll can heal a tortured soul.

One thing for sure John Lennon would have continued to lend his name, time, and money to any cause that captured his attention. During his lifetime Lennon did benefit concerts for UNICEF and the Willowbrook Institution for Children with Intellectual Disabilities. John also gave support and money, quietly, to various people in need.

I am sure he would have been amused by the upcoming 2016 election cycle. Who would he have supported? I am sure he would pay close attention to the character of the candidates running. He would never support a liar like Hillary Clinton or a no where man such as Bernie Sanders. Perhaps he wouldn’t support any of the current candidates.

What would John Lennon think about American Society today? In one of his last interviews Lennon stated, “ They pick a president, they put him up there and then set fire to him because he couldn’t solve their problems; because they’re always looking for someone to provide for them.”

With that statement John Lennon was describing the current entitlement society that the Obama administration so fervently supports.

One time Lennon stated, “Our society is run by insane people for insane objectives. I think we’re being run by maniacs for maniacal ends and I think I’m liable to be put away as insane for expressing that. That’s what’s insane about it.”

In his lifetime Lennon did not suffer fools gladly. President Obama’s arrogance, dismissiveness, and his lack of genuine concern would irritate him. He would see the lack of focus of the current demonstrations on college campuses as lackluster. The result of a privileged and a spoiled brat mentality.

I think that Lennon would be picking up a sign again and leading his own demonstrations in a far more effective manner than the youth of today.

A few days before his murder John Lennon stated the following, “Give Peace a chance, don’t shoot people for peace. All you need is love. I believe in it.”

Let us march together in love to get our country back. Imagine and act.

Former CA Assemblyman to AG Loretta Lynch: "I Dare You to Arrest Me Instead of the Jihad Next Door!"

Daniel Greenfield: A Date That Will Live Forever in Infamy