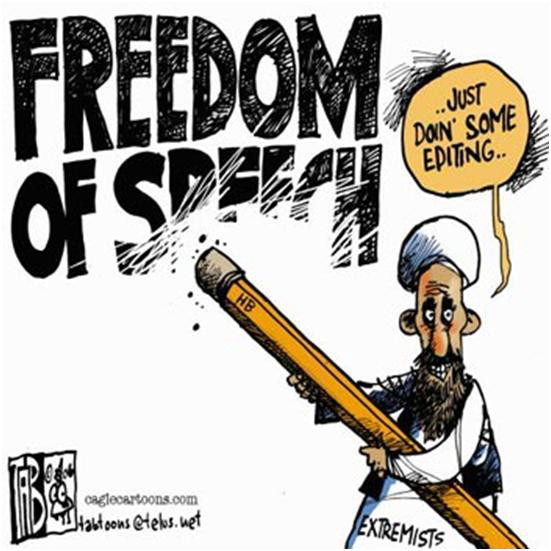 When Muslims murdered 11 and wounded 11 others on January 7th, 2015 at the French Publication Charlie Hebdo, there was justifiable outrage and the Western world came together proclaiming “Je suis Charlie” to show solidarity for freedom of speech. Yet, how many Western news outlets refused to ‘be’ Charlie by not showing any of the satirical cartoons of Mohammad, which were claimed to have been the cause of the attack?

Since the Beirut Bombings in Lebanon in 1983 in which over 241 U.S. Marine, Navy, and Army personnel were killed, there have been more than 400 Islamic terrorist attacks worldwide.

During the years since politicians, journalists and talking heads have been trying to distance the Islamic ‘religion’ from the ideology of extremists by claiming the religion has been hijacked and that Islam is a religion of peace.

In 2012 Congresswoman Michele Bachmann was excoriated by Senator John McCain and thrown under the bus by Senator Marco Rubio and others for daring to question the Muslim Brotherhood ties of some in our Government’s highest security posts. It was reported recently that Rep. Stephen Lynch (D., Mass.) disclosed that a congressional investigation recently found that at least 72 people working at DHS also “were on the terrorist watch list.”

In other words, as Bachmann and others like her have learned firsthand even daring to point out provable FACTS regarding the danger of Jihad in America garners people to be called Islamophobics.

This is the epitome of hypocrisy, yet so many fail to see that by bowing to an ideology which was born out of violence, and not allowing valid questions about dangerous factions within Islam they are giving in to what terrorists want- to wield power by terror to spread their ideology.

During the past 14 years of the ‘war on terror’, politicians, journalists and talking heads have been bending over backwards to appease and assuage the ‘fears’ of Muslims and groups such as CAIR, and yet at the same time going the extra distance to make moral equivalencies between what Muslims still do and bringing thousand year old history of the Crusades for Christian examples of ‘terrorism’.

It’s amazing though that while they use the Crusades as an example they don’t mention that Muslims were invading Christendom first; raiding, murdering and driving out non-Muslims in conquering land for Allah. Sounds familiar doesn’t it?

Assuaging Muslims over fears of perceived backlash every time a Muslim commits an act of terror is one thing, but it seems as if we’ve entered a newer low when victims or potential victims are blamed or claimed to ‘share in the responsibility’ of being murdered, or rationalizing it as Secretary of State John Kerry did.

In a recent CNN interview, Hussam Ayloush, of CAIR’s Los Angeles chapter, said, “Let’s not forget that some of our own foreign policy, as Americans, as the west, have fueled that extremism.”

Excuse me but what excuse can people such as Ayloush give for all the Islamic violence which occurred before America was even a country? Or for the piracy and hostage taking, slave making practices of the Barbary Muslims which led to the formation of the United States Marine Corps?

Islam’s prophet was a terrorist, what excuse can anyone give for his 1400 year legacy?

Ayloush goes on to not only compare Islamic extremists with Christian extremists, but he claims that by calling terrorists Islamic we’re somehow legitimizing these terrorists. Islam is an aggressive and violent ideology which gains converts and conquers lands by acts of violence and terror. Giving in and appeasing is what legitimizes terrorists.

Likewise, blaming the victims also legitimizes the so called Islamic aggression. Fellow blogger Angela Sanders recently wroteabout New York Daily News columnist Linda Stasi’s opinion piece in which she compared San Bernardino murder victim Nicholas Thalasinos, to the Muslim terrorist by calling him a bigot. She continued to focus on Thalasino’s perceived bigotry throughout the article. It’s incredulous that anyone can blame a victim, especially a dead one.

Blaming the victim actually isn’t so new, as Republican Presidential Candidate Donald Trump also attempted that play when he called Pamela Geller “pathetic” and a “publicity seeker” when she hosted a “Draw Mohammad” contest in Garland, Texas back in May of this year which also drew Islamists attempting an attack.

Trump never back tracked on those comments and in fact doubled down saying, “Now, you look at Muhammad and you look at some of the positions they have Muhammad and some people are going to get extremely upset about it. Now, I’m not the only one and I’m not the only Conservative Republican that feels this way. They’re lucky to be alive. Why with all the problems we have, why taunt?”

Perhaps it should be explained to Mr. Trump that it all boils down to a couple of inherent freedoms, one being freedom of speech. Pamela Geller has been exercising this freedom for over 15 years, trying to wake people up to Islam’s ideology. Were western society not so intent on political correctness and appeasement maybe she and others wouldn’t have to resort to “taunting” by pointing out a fact–that if one calls itself the religion of peace, why is it they go on a murderous rampage if they are provoked?  And does provocation justify murderous rampages by the “religion of peace”?  Mr. Trump has a “yuge” following because of his bluster and tough guy “you’re fired” kind of reality TV show rhetoric.  It’s refreshing to a lot of folks who have been sick of politics as usual.  However, none of Trump’s previous activities included warning of dangerous aggressions and ideologies which have harmed millions of people the way Geller’s have.  Why taunt? Perhaps it’s the same reason he feels so obliged to threaten to block any Muslims from immigrating here now that there’s been another attack.  It shows the world how idiotic it is to say the “religion of peace” is peaceful–unless of course you draw a picture of their prophet, then all hell breaks loose and they want to kill you.

The hypocrisy is astounding that at a time when so many people equate Christians with extremism, so many have no problem promoting Pi$$ Christ as a daring work of art- but good luck finding anyone so daring to Pi$$ Mohammad or even draw a cartoon of him. It wasn’t Christians mowing down Charlie Hebdo cartoonists, who have also mocked Christ, and it wasn’t Christians blowing up churches and busses, strapping suicide vests to their children, using planes to crash into buildings or shooting Parisians or Californians either.

Why taunt?  Because people are still blaming the messenger instead of the message, and worse, justifying terrorism by saying if you’d just leave those peaceful Muslims alone, they wouldn’t kill you.

It’s called The First Amendment. People have been using it to disparage, criticize, mock and taunt every group, race, philosophy and yes, religion for centuries- but no one has been afraid of violent backlash from any other group but one.

I am not advocating mocking, disparaging, targeting or retaliation in any way shape or form against Muslims, but I will continue to speak out against Islam especially when people continue placate Muslims by calling them peaceful and tolerant while claiming Christians are intolerant bigot domestic terrorists comparable to the Taliban.

The West regurgitates the narrative that there are billions of peaceful Muslims in the world yet terrorists make up such a minute minority. If only 2 percent of all Muslims were jihadists bent on spreading Islam through violent conquest that would still make up twenty million terrorists who share the same ideology which permits lying to further their cause, to hide their intent. Western nations open their borders wide and throw out the welcome mats to millions more who believe that the world is divided into the Dar al-Islam (House of Islam) and Dar al-harb (House of War) and then call us islamophobes for questioning their rationality.

People who call those who warn about Jihad “Islamophobics” either have willful or misguided notions on what constitutes a phobia and are the true Islamophobes. They are the ones who are afraid of violent retaliation by the “religion of peace” by justifying terrorism in order not to offend those who share the same ideologies.

RADICALIZATION from Start to Finish