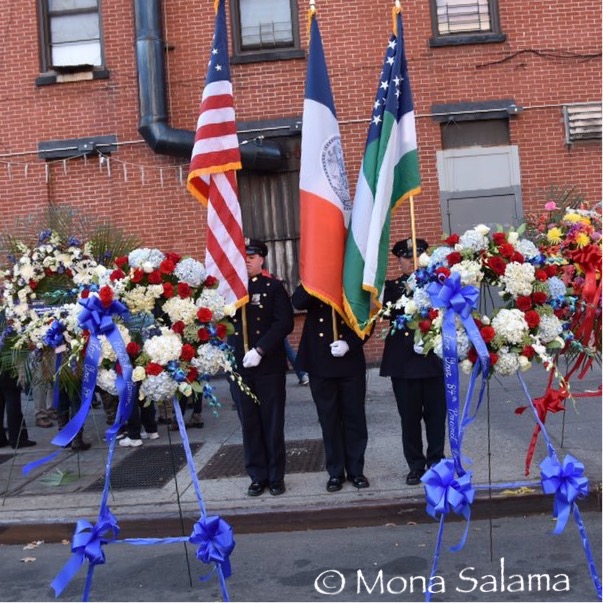 It has been one year since two NYPD officers were gunned down execution style while sitting in their marked patrol car in Bedford-Stuyvesant, Brooklyn. The ambush horror was met with anger and sadness across the nation, as two innocent lives were lost instantly, only because they wore blue.

Liu was a seven-year veteran of the NYPD who was recently married two months before his assassination. His partner Ramos recently joined the force in 2012 leaving behind a wife and two young sons.

Family members of both officers along with hundreds of fellow colleague officers, city officials and mourners gathered outside the precinct early Sunday afternoon for two emotional ceremonies paying tribute on the one-year anniversary of their deaths. The ceremony took place outside the 84th Precinct station in Brooklyn, where both officers were assigned. “These memorial plaques will be mounted in the station house for all times,” Bratton said. “So that if anyone that enters this station house will be reminded of their sacrifice.”

On December 20, 2014, both Liu and Ramos were sitting in their patrol car in Brooklyn when they were shot at point-blank range. Neither officer had the opportunity to draw their weapon as they were killed with no warning. The mentally derange killer traveled from Baltimore vowing to kill NYPD officers in retaliation for Eric Garner cases. After the ambush assassination, the killer fled the scene and onto a subway station. He killed himself as officers were closing in. 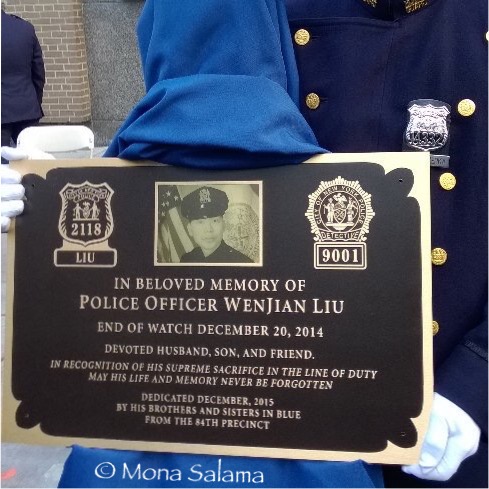 Prior to this tragedy, New York City erupted in day after day protest over the Eric Garner decision where the grand jury declined to bring criminal charges against the police officer. Protestors got intense with their protest and began to incite violence with police officers. Days before, one protest had protestors chanting, “What do we want?, Dead cops, When do you want them?, Now.”

“Their death stopped a momentum, a momentum towards a precipice in this country a year ago that was beginning to spin out of control,” said Bratton. “An awful sacrifice have to make, but something that had an impact on this city and in this country.”

The most heartbreaking part of the ceremony was when Officer Liu father, Wei Tang Liu spoke at the memorial service before the unveiling of the plaques. Speaking in his native language, Chinese, the grieving father sobbing heavily throughout his remarks as he talked about his son and how he misses talking to him everyday. “Before my son’s death, I would hear his voice everyday for the past 33 years of his life,” said Officer Lui father, through the translation from his daughter-in-law, Pei Xia Chen. “I would give anything to see him and hear his voice again.” Chen concluded by thanking everyone for the support they have received this past year and wished all in attendance a “Merry Christmas and a happy and safe New Year.” 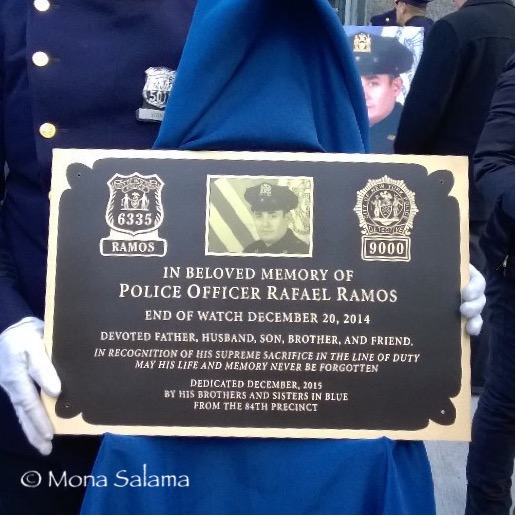 After the plaque-unveiled ceremony, Commissioner Bratton and Mayor de Blasio continued to commemorate the slain officers several miles away at the site where both officers were killed. Two wreaths were laid at the intersection of Tompkins and Myrtle Avenue, the spot where both officers sat in their patrol car for the very last time. At 2:47 pm, the precise time when the tragic unfolded, a moment of silence was observed in honor of the slain brave officers.

Robert Spencer: The Criminalization of Dissent