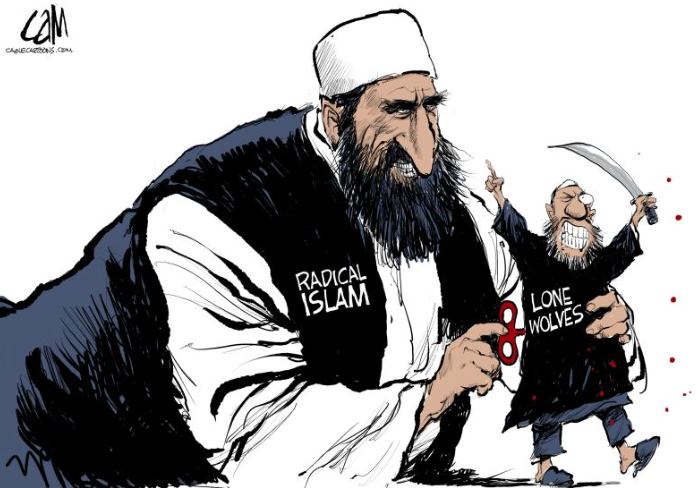 How does RADICALIZATION start?  Radicalization is a process of becoming an extremist, one who follows an idea, which is attractive to him or her because it is “winning” and speaks to their inner selves. It is – a calling.

Radicalization is not any different from our “conversion” to some activity we love. I love to swim, so I join the team, we swim together. We are keen on it and feel a familial bond when we get together and compete. It springs from within because we all need some form of persuasion, some grand and noble idea to follow. It is one of the greatest and noblest of human characteristics. As such, it is also supported from without, because there are already followers and societies that accept us as their members.

Radicalization can be good and productive if it is based on an idea which advances humanity. Edison was a radical, so was Ford and Rockefeller. To think of it, Jefferson, Hamilton, Madison, even George Washington were radicals – rebels, mavericks, radicals all! The term “radical” means strong headed and persuaded of one’s own right and of the value of what one says and does. In a way, Donald Trump is a radical – except his “radical philosophy” is that of “America First”, and it does not kill or hurt anybody.

Radicalization is not something one is subjected to and must accept. I grew up in a society which wanted to radicalize me, make me into a communist, blindfold me to the Free World. I was taught communism, I had to wear a communist uniform, go to communist manifestations where I was supposed to shout: “With Soviet Union Forever and Never Any Other Way!” The more they forced it into me, the more I resisted.

What happens today is no different. It takes place online and in mosques but there is little difference in terms of its appeal as an ideology. By being secreted, it is made even more attractive. People in the West are radicalized precisely because they are not forced into it the way I had been. They find it appealing as a cult and an ideology.

Islam is not a religion of peace for one simple reason: it is not able to defend itself against this radicalization. The majority may be “peaceful Muslims” but they are but followers. It is the radical minority that rules and prevails, because they are the leaders, they set the direction of the whole “nation” or “House” of Islam, if you will, in the same way the communist “papalashe” set the direction for entire nations when I was growing up.

The way to defeat radicalization, and thus radical Islam, is not by trying to trace every single convert and look for needles in a haystack but by making the ideology itself unpopular, uncool, unattractive, and show that it has failed or that it leads to nowhere.

This must be done: 1) by eradicating them physically (not here but at the root), 2) by having stronger propaganda, 3) by ostentatiously displaying our cultural superiority.

First, physical eradication. This is clear and requires very simple strategy, a pincer maneuver supported from the air. Untie the hands of our military and they will do the job in a week or two. Just cut them loose and let them do their jobs.

Further, do the same with the police and FBI at home. Let them choose the means and ways, and let them “profile” if they deem it necessary. Profiling means composition of details into a picture. For that, you have to be a great fact-finder. Modern detective work started with Sherlock Holmes and if you can say one thing about Sherlock: he was a great profiler, detail and fact-finder.

Second, propaganda is a concerted media effort, which must begin by promulgating our uniqueness and pointing out disadvantages and drawbacks of the typical Sharia society, which is a backward totalitarian theocracy and for which there is no room in a civilized society. We all can contribute to the blogs like this one and make ourselves heard in a persuasive way.

However, the main propaganda must come from the government. Perhaps we should have a propaganda center within the CIA whose purpose it would be to only make movies, videos, write blogs and post well-informed, targeted internet propaganda.

Third, we should all fly American flags – not just at home, but abroad. I would swamp the Middle East with American flags, pictures of Hollywood and little bric-a-brac souvenirs showing our American greatness. I would do the same with all media in the Middle East. When I was growing up, the Russians were constantly jamming Radio Free Europe and BBC World Service. Instead, they were feeding us pre-digested, censored “news” about the greatness of the Communist World. There’s a thought…

When President Obama called them a “JV Team,” he was right in one respect: they are inferior fighters with no military education, and they are also too inexperienced and young to know what life is really about. Someone who believes in “Paradise and 77 virgins” is mentally undeveloped and intellectually retarded.

Finally, the House of Islam must stop teaching Quran literally. No religion is to be taken literally; all religions are allegories and guides to our lives. There may be real elements and stories in them, but the substance is to guide us to a productive and peaceful existence. To paraphrase Hayek, “It is always the most painful experience when we find out that the ideal we have blindly followed led us to the very opposite we wanted to achieve.” In this case, two misguided Muslim fanatics ended up splattered on the street like road kill. They will be buried in shallow graves where no one will visit them but a stray dog that will go there to mark its stone. Paradise?  No–it is the end of radicalization.

The Tradition of the Wreath