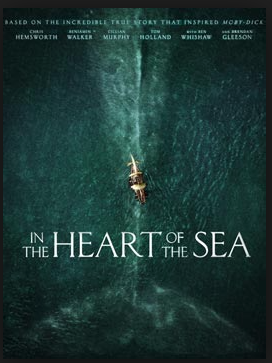 In 1850, a young Herman Melville visits the home of Tom Nickerson to solicit a story he has heard of a great white whale sinking an American whaling ship the Essex in 1820. Nickerson is the last living survivor and Melville, having completed only one novel previously, is anxious to commit the story to his next novel. Although Nickerson is tormented from his experience, his wife convinces him they desperately need the funds Melville will pay as Nickerson reluctantly agrees.

Being that whale oil is the primary source of maintaining light, the whaling industry is crucial to a civilized insistence in 1820. In the new film, “In the Heart of the Sea“, Nickerson is a young boy when he boards the Essex with First Mate Owen Chase and Captain George Pollard. Chase and Pollard are at odds with their given positions on the ship as they set sail from Nantucket. As the ship reaches a known whaling site, it becomes apparent it is severely depleted of whales due to over whaling. Chase and Pollard hear rumors of a far-reaching site in Ecuador that is still plentiful, but also has the warning of a great white whale attacking and killing members of a previous crew. The Essex captain and crew ignore the warning and decide to make the long and dangerous trek to provide the needed oil.

As promised, once they arrive, the waters are teaming with whales. However, also as promised, they encounter the great white whale whose attack is not only incredulous, but seemingly calculated as well.

Chris Hemsworth is predictable and over-acted as Owen Chase the ships first mate with Benjamin Walker (George Pollard) being the better and more believable of the two. Tom Holland as the young Nickerson is adequate, with the real standouts being Brendon Gleeson (the elder Nickerson) and Ben Whishaw (Herman Melville).

I remember years ago reading the true story of the Essex which inspired Melville’s magnificent novel, “Moby-Dick” and was amazed at the relentless retaliation of the great white whale. “In the Heart of the Sea” directed by Ron Howard, was not accurate to the story I had read (from the Smithsonian) on several points and seemed lack luster and superficial in it’s interpretation of this incredulous tale. However, I appreciated the film not chastising the need for whaling at that time and it’s honoring of the men who risked their lives pursuing it.