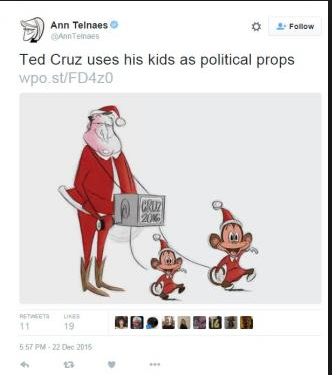 Happy Wednesday. ‘Tis apparently the season time for political insults. Let’s get to it as I cover the following news:

Can the Mainstream Media stoop any lower? Well Washington Post did on Tuesday when cartoonist Ann Telnaes drew a cartoon captioned as, “Ted Cruz uses his kids as political props.” The cartoon was in response to the viral ad Cruz released over the weekend called “Ted Cruz’s Christmas classics” performed by Cruz reading politically “Timeless Christmas classics” stories to his daughters.

The ill-depict cartoon portrays Cruz dressed, as Santa Claus wearing cowboy boots with his two daughters are illustrated as dancing monkey attached to the leashes of the organ grinder. Cruz quickly blasted the cartoon and Marco Rubio, who has been attack Cruz for several weeks, came to his defense on Twitter.

Classy. @washingtonpost makes fun of my girls. Stick w/ attacking me–Caroline & Catherine are out of your league. https://t.co/N61ys6z8w1

Wash Post cartoon featuring @tedcruz’s children is disgusting. The Post saying the kids are “fair game” is even worse.

Cruz thanked Rubio for the support and the heavy backlash to the disgusting cartoon was removed by the Wash Post and replaced with an editor’s note:

“It’s generally been the policy of our editorial section to leave children out of it. I failed to look at this cartoon before it was published. I understand why Ann thought an exception to the policy was warranted in this case, but I do not agree.”

Telnaes did agree so and defended her disgusting drawing on Twitter.

“Ted Cruz has put his children in a political ad — don’t start screaming when editorial cartoonists draw them as well,” she tweeted.

After Hillary Clinton lied during the Democratic debate last Saturday night stating Donald Trump’s rhetoric against Muslims is used for ISIS recruitment and her campaign saying “Hell no” to apology, Trump responded in his plain speaking non politically correct tone that is now considered by the mainstream as “vulgar.”

On Monday, Trump described Hillary’s loss to now-President Obama for the 2008 Democratic presidential nomination in his rally in Grand Rapids, Michigan. “She was favored to win and she got schlonged, she lost,” Trump said. “Schlonged is a Yiddish word for a man’s genital. Trump argued after the mainstream media portrayed his comment as sexist to argue he used this phrase to mean “beaten badly.” On Tuesday, Trump tweeted the mainstream media is giving a false meaning of the word.

Hillary campaign is refusing to apologize to the lies Hillary said on Saturday night took to twitter to respond to Trump comment. “We are not responding to Trump but everyone who understands the humiliation this degrading language inflicts on all woman should,” Clinton’s communication director Jennifer Palmieri tweeted Tuesday morning. Hillary late Tuesday night in Iowa responded that she “deplores” the tone of Trump but is not surprised. “I really deplore the tone of his campaign, the inflammatory rhetoric that he is using to divide people, and his going after groups of people with hateful, incendiary rhetoric,” Hillary said.

Breaking: Trump took to Twitter Wednesday morning to blast Hillary’s comment, stating she is “playing the women card”.  He also accused her of staging a campaign stunt at a rally Tuesday night in which a young girl with asthma asked Hillary for advice about responding to bully. Trump tweeted Wednesday morning, “The Hillary Clinton staged event yesterday was pathetic. Be careful Hillary as you play the war on women or women being degraded card.”

The January 14 GOP debate will likely show six candidates on the main stage according to the criteria released by FOX Business. The newly added debate will take place in South Carolina, a day after President Obama last ever “State Of The Union” address. According to the network criteria, there are three qualifications where a candidate must do one of the three to qualify for the main stage debate:

The network will also have a “kiddie table” undercard debate for the lower-tier candidates. To qualify for the undercard, the candidate must register at least 1% in one of the five most recent national polls. Polls released before January 11 will be used to help determine candidate placement into debate stage.

Looking at the polls so far to determine debate standing, the latest five national polls average, according to Real Clear Politics, has Donald Trump with 35.6%, Ted Cruz with 18.6%, Marco Rubio with 11.6%, Ben Carson with 9.4%, Chris Christie with 4.6% and Jeb Bush with 4.4% as the top six candidates.

The average of Rand Paul, Carly Fiorina, and John Kasich has them average with 2.6%, 2.2%, and 1.8% in that order. This means that Paul, Fiorina, and Kasich so far will be booted from the prime time stage unless they get a boost in one national poll to help their standing.

*#MonaLog will return next Monday for recap on the 2016 campaign trail.  Enjoy your Christmas everybody.