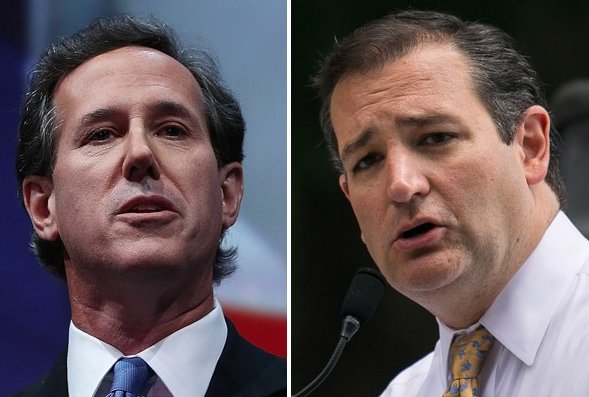 Rep. Trey Gowdy endorses Marco Rubio for President while the establishment candidates attacks Rubio. George Pataki finally announces in a YouTube video that he gives up running for President having 0% polling since his announcement. Rick Santorum says Ted Cruz is “not a social conservative.”

“I’m going to vote for Marco Rubio, and I’ll tell you why. National security and public safety are the most important issues to me and there is nobody better on those two issues than Marco Rubio.”

The endorsement could give Rubio a boost in Iowa and especially Gowdy home state of South Carolina, the third state to hold a primary and the first in the south, as Gowdy is beloved by the grassroots conservative movement in large part for his position as chairman of the Benghazi Committee. The double boost is valuable for Rubio as Gowdy can remind voters of Hillary Clinton role of the Benghazi attacks; a key issue that has somewhat tarnished Clinton value of being a strong when it comes to the issue of foreign policy.

Over the weekend, the announcement came out that Gowdy would be joining Rubio in six scheduled campaign stops in Iowa offering his “full support” but stopped short of saying it will be an official endorsement for president.

“I hope @TGowdySC does better for Rubio than he did at the #Benghazi hearings, which were a total disaster for Republicans & America!” Trump tweeted.

Despite Rubio getting big key endorsements from fellow colleagues in the House and Senate, he faces attacks from fellow rivals and this time it’s not from Ted Cruz.

New Jersey Governor Chris Christie on Tuesday told voters in Iowa that Rubio should consider resigning from his Senate seat.

“Dude, show up to work and vote no; and if you don’t want to, then quit,” Christie said to voters during a town hall meeting in Muscatine, Iowa.

That same line of Rubio not showing up to work in the Senate as recently Rubio skipped out of voting for the most important bill of the year, adding that Rubio also missed a briefing following the Paris Attacks in November is also being used by Jeb Bush’s super PAC Right to Rise. The Super PAC new ad that cost $1.4 million will air in New Hampshire and Iowa over the next two weeks attacks Rubio for missing the most votes than any other senator. “Over the last three years, Rubio has missed important national security hearings and missed more total votes than any other senator,” the narrator in the ad from Right to Rise.

As Christie escalates his criticism of Rubio recently during his campaign trail, Rubio hit back at Christie for doing the same thing in New Jersey. “You know, Chris has been missing in New Jersey for half the time,” Rubio said hours later in Iowa after his town hall event. “Candidates, as we get down the home stretch, some of them get a little desperate and a little nasty in their attacks.”

As for the Right to Rise ad, Rubio campaign team pushed back against the alleged attacks of Rubio missing intelligence briefing. “No other candidate for president has received more classified intelligence briefings or better understands the threats facing our nation today than Marco,” Rubio spokesman Alex Conant said in an email statement. “It’s sad to see Jeb’s joyful campaign reduced to such intellectual dishonesty.”

Former New York Governor George Pataki ended his bid for president on Tuesday in a web video posted on social media as well as his “equal time” segment that was granted by NBC to match Donald’s Trump appearance on Saturday Night Live.

“While tonight is the end of my journey for the White House as I suspend my campaign for president, I am confident we can elect the right person,” Pataki said in the two-minute advertisement that aired in Iowa, New Hampshire, and South Carolina on NBC. “Someone who will bring us together and who understands that politicians, including the president, must be the people’s servant and not their master. I know the best of America is still ahead of us.”

Pataki was a three-term Governor of New York during the September 11 terrorist attack in 2001 hoped he could garnish attention in a crowded field with moderate Republican voters but failed as he couldn’t break his 0% polling or qualify for prime-time debates. He attempted to go after the GOP front-runner Donald Trump declaring him to be unfit to be president. “Donald Trump is the Know-Nothing candidate of the 21st century and cannot be our nominee,” Pataki said. Those efforts went unnoticed even though Trump retaliated back calling Pataki a man who “couldn’t even be elected as a dog catcher.”

Another blow to Pataki long shot bid was lack of resource to continue as his latest fundraising quarter showed he only raised about $153,000 while taking out significant loans as his rivals outpaced him raising over millions during the same time.

Pataki also failed to make the primary ballot in key states such as Ohio, Texas, Florida and Virginia. Prior to the last GOP debate two weeks ago, Florida’s Secretary of State announced which candidates would appear on the state’s March 15 primary ballot. Pataki’s name was one that would not appear citing candidates who appear are based on a list provided by Florida party leaders. Pataki also missed the deadline to file for the Republican Party primary ballots in Virginia by failing to obtain 5,000 voters signature petition to qualify while other states require filing fee to get on the ballot.

I’m surprised Pataki didn’t ring up the New Year with this announcement; maybe he didn’t have the money to wait two more days. Guess we are ringing up 2016 with now 11 candidates seeking to become the Republican nominee for President.

Rick Santorum: “Ted Cruz is Not the Social Conservative”

Former Pennsylvania Senator Rick Santorum went on the attack on Tuesday, stating he finds it weird that the social conservatives in Iowa supports Cruz as well as Donald Trump.

Santorum continues on to mention how Trump recently became a conservative the last few months to run for president. As for Cruz, Santorum says Cruz takes the position of the Tenth Amendment of states right, which is a Rand Paul/Ron Paul position when it comes to defining marriage.

Jeb Bush is in South Carolina

Marco Rubio is in Iowa with Trey Gowdy

Chris Christie is in Iowa

Rick Santorum is in Iowa

Daniel Greenfield: Duma and the Return of the King