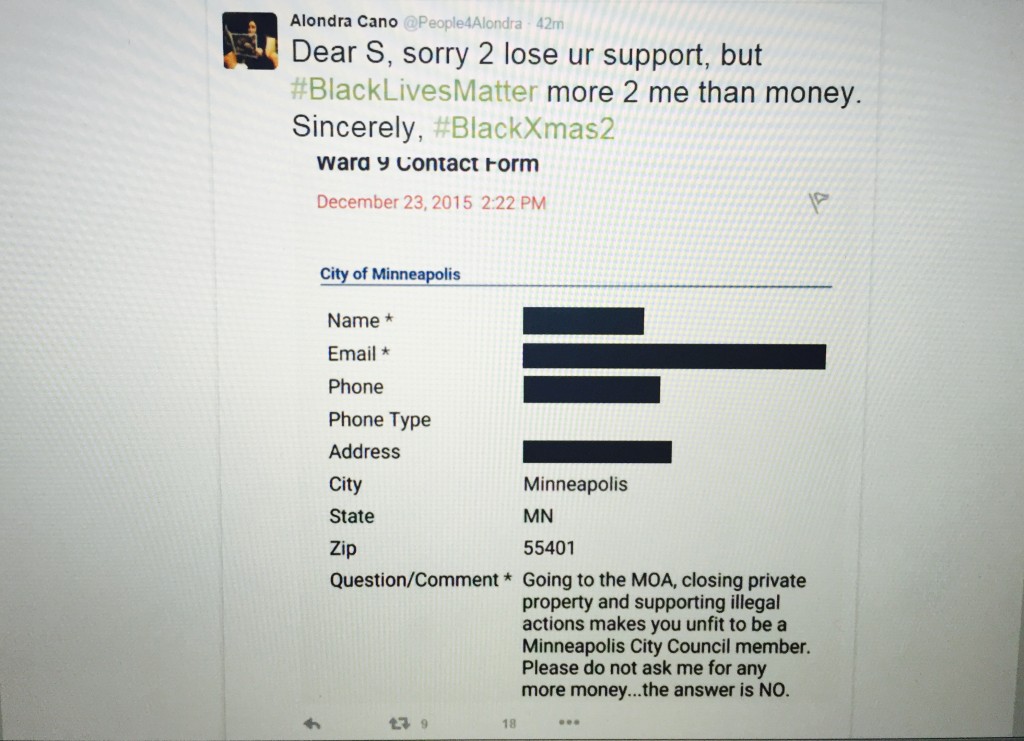 (Minneapolis, MN) Democratic Minneapolis Councilwoman Alondra Cano decided to march with the Black Lives Matter protestors in their attempt to shut down the Mall of America (MegaMall) 2 days before Christmas. And she apparently sought revenge against her constituents who believed her actions were inappropriate.

The court order did not stop Councilwoman Cano, however. She proceeded to join over a dozen other protestors December 23rd on the MegaMall property.

But many of her constituents were not happy with that decision.

Several local voters began sending private messages to Cano, worried that her involvement in the holiday shopping disruption at the Megamall was highly inappropriate for a sitting Councilwoman.

Cano apparently didn’t care. And she took action against those that had shown their dissent:  She (publicly) tweeted the private messages and personal contact information of 4 voters that disapproved of her actions.

One of the individuals “doxed” was local constituent Stephen Dent, whom ironically had been a contributor to Cano’s campaign. In his message, Dent stated Cano was no longer fit for public office with her involvement in “closing private property”. He also suggested she was “supporting illegal actions” by being involved with the protest.

The Democratic councilwoman, who’s twitter profile (at the time of this writing) includes her personal description as “Daughter of the Third World Feminist movement”, had recently come under suspicion for questionably using taxpayer money to fund a European getaway to Barcelona, Spain.  (8 months after that trip, no known benefit to the city of Minneapolis has been realized.)

And, as for the “doxed” tweets?

This War is Not About Religion, It Is About Hate.

American Taxpayers Sold Down the River By Republican Dominated House