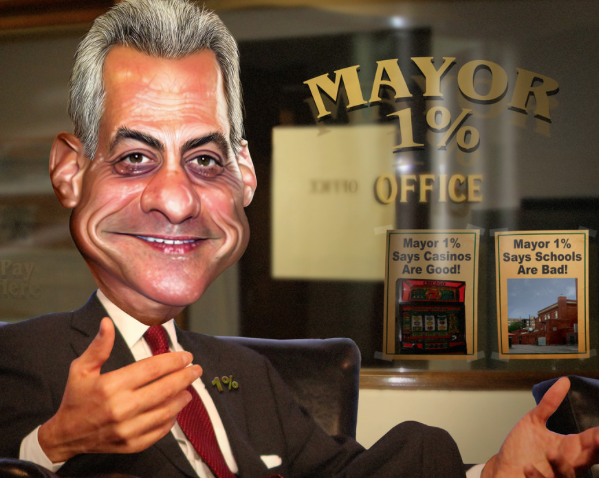 Americans watched in shock as video surfaced of Laquan McDonald being murdered by a Chicago police officer. The term over-kill didn’t sum up half of the 16 bullets Officer Jason Van Dyke pierced into the teenager. Though if this unthinkable murder occurred in October 2014, why is the American public catching wind of the slaughter a year later?

Anyone that follows politics, elections, or the democratic party would have the answer. Mayor Rahm Emanuel may have mastered the “Chicago Shuffle”, possibly concealing the murder allowing many to fall due to self preservation. In November 2014 Mayor Emanuel was doing his best at convincing Chicago residents he deserved to remain in office despite numerous setbacks in the windy city. Residents were rightfully displeased with the city’s high murder rate, closings of dozens of public schools and Emanuel seemingly ignoring both the working class and the poor. Could you imagine if you tacked to the list a white cop killing a black teenager just 3 months following the murder of Michael Brown in Ferguson, Missouri? Narrowly escaping a defeat, Mayor Rahm Emanuel secured his comfy position in a runoff election.

Rahm Emanuel ousted Chicago’s Police Chief McCarthy, Tuesday, subsequent to days of protest from an outraged city. The resignation of Garry McCarthy looked vaguely familiar. Baltimore’s Mayor Stephanie Rawlings-Blake fired Police Commissioner Anthony Batts in the wake of the unrest due to the death of Freddie Gray while in police custody. Residing in Baltimore, I was fully aware of our State’s Attorney Marilyn Mosby asking police to target the very intersection Gray was arrested with “enhanced” drug enforcement efforts. I was honestly baffled by the commissioner’s discharge. Mayor Rawlings-Blake issued the stand down order, pulling rank over Commissioner Batts, as West Baltimore went down in flames. Yet, Batts fell as the scapegoat for both women currently parading as civil rights activists for charging 6 cops for their role in Freddie Gray’s death.

Did Mayor Emanuel convince McCarthy to step down with the promise of a heavy briefcase alongside separation pay? What did Garry McCarthy have to gain or lose for asking the nearby Burger King to erase the recording of Laquan McDonald’s murder? Had he ejected Officer Van Dyke for the shooting, perhaps McCarthy may have been a hero, the White Knight if you will. A white police chief holding a white officer accountable for misconduct with unlimited transparency, why not? Rahm Emanuel is the only official in the Chicago pyramid that had a solid motive. McDonald’s blood would have stained “Mr. One Percent’s” aka Emanuel’s campaign just enough to knock him out of office.

It is hard to hide a smirk learning more classified emails are being released daily from former Secretary Clinton’s squeaky clean server. Could you imagine if emails lead back to POTUS himself, concealing Benghazi by blaming a video instead of ISIS in order to win the election over Romney? Mayor Rahm Emanuel being President Obama’s former White House Chief of Staff brings optimism. When this is all said and done we may have an impeachment, a plethora of apologies to Congressman Trey Gowdy, and finally a country we can be proud to call America.

Op Ed: Why I Am Endorsing Senator Ted Cruz for President 2016