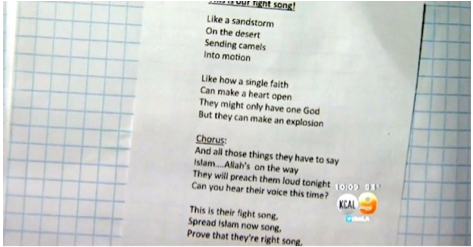 Do you ever wonder what certain teachers are thinking? Does the thought of a progressive teacher indoctrinating children with their beliefs frighten you, or make you angry?

The unfortunate truth is that some teachers are just plain stupid and don’t belong anywhere near a classroom–another anger-inducing thing that leaves parents shaking their heads in absolute disbelief.

Recently California’s Orange County was brought into the spotlight with the teacher who must have been competing for “Dumbest Assignment of the Decade” award. I hope she wins.

To set up the scenario, imagine being a mom and finding your 12-13 year old child reading a school book that includes a song about being a Muslim terrorist set to the tune of Rachel Platten‘s “Fight Song”.   (You might want to re-read that sentence to let it soak in a bit…)

With the growing unrest among Muslim people and the rest of the world–including the recent jihadist attacks in Paris– you would think that lessons on Islam would slacken a little. The Five Pillars of Islam may not be something a teacher would want to cover right at this moment. With Americans growing ever more fearful of Islamic terrorist attacks, made in the name of Islam, the timing couldn’t have been worse for this assignment.

Before anyone misunderstands me, I’m talking about terror in the name of Islam. Not all Muslims are terrorists but all terrorists shouting “allahu akbar!” are Muslim. Get that. Know that. Remember that.

Some of the lyrics to the song include:

This is their fight song

Can make a heart open

But they can make an explosion

Ironically, representatives from Orange County’s CAIR (Center for American and Islamic Relations) are not happy about the song. They obviously don’t like the term “explosion” being used anywhere near the name of their religion. (Perhaps a little too close to home, you know?)

Ojaala Ahmad, CAIR spokeswoman, made the point that with the recent attacks that ISIS has been perpetrating on the world, perhaps the song might produce some Islamophobic retaliation.

Wait, what? CAIR isn’t concerned about the fact that the song seems to be promoting Islam–they are upset that the song might lead to Muslims being hurt in retaliation for the song…

Daniel Greenfield: Everything's Fine Until the Bombs Go Off