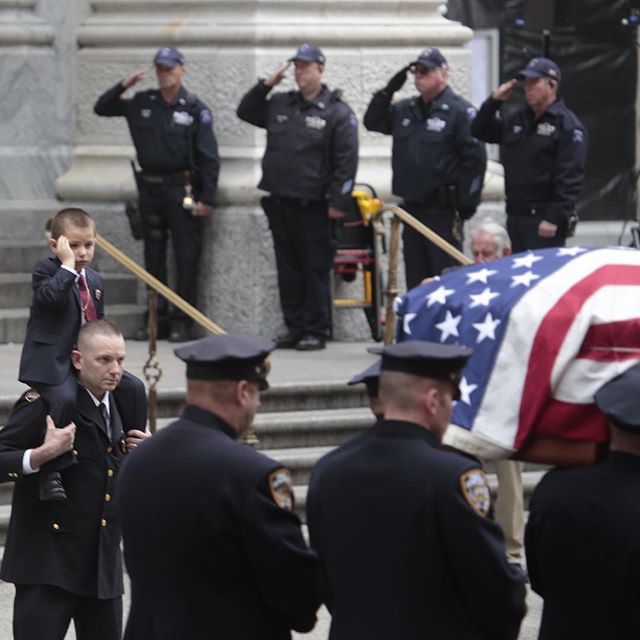 5th Avenue, the landmark section of New York known for its fashionable flagship stores, was shut down for hours on Wednesday. A sea of blue of uniformed Officers from across the region and U.S. military service members gathered during a sunless morning to pay their final respect and say goodbye to Detective Joseph Lemm.

The most unforgettable final salute came from Detective Lemm’s four-years old son. Little Ryan Lemm, wearing a detective shield pinned to his lapel, saluted as he watched from atop a cop’s shoulder, his father’s American-draped coffin being carried out of St. Patrick’s Cathedral. Ryan’s father was an NYPD detective and an Air National Guard technical sergeant who was killed in Afghanistan last week by a Taliban suicide bomber.

Police Commissioner Bill Bratton delivered the most emotional eulogy, speaking from his heart about a true American hero that received applause and a standing ovation when he saluted Detective Lemm’s record of service and his ultimate sacrifice. “Today we say farewell to a hero of our time and a hero for all ages,” Bratton said as he promoted Lemm posthumously to detective first-grade.

During his eulogy, Bratton mentioned over 1,100 members of the NYPD are military reservists with over 130 of them currently on active duty. Since the September 11 attacks in New York, Detective Lamm has been the third NYPD officer who has been killed in an overseas deployment. “This war took him thousands of miles away from his family, and from the city and country he protected and dearly loved,” Bratton said tearfully. “And now it had taken him farther than miles, to a new post in eternity. For Air Force Technical Sgt. Joseph Lemm, his war is ended.”

“But it is not ended for his loved ones, for whom the pain of losing him must seem beyond bearing. It is a shroud of mourning that no words or actions can ever really pierce. But once again, as we did for Detectives Ramos, Liu, Moore, and Holder, we will try,”

While the funeral was not open to the public, the service was broadcast by loud speakers to the public mass who gathered the 2 mile radius along 5th Avenue to pay respects.

“Joe never missed a police funeral no matter where it was,” Rev. Christopher Monturo, Lemm’s local priest said during his eulogy. “It is fitting there are so many here today.”

Lemm’s daughter, Brooke, read from Ecclessiastes during her eulogy. She concluded her remarks with the lines, “A time to love and a time to hate. A time for war and a time for peace.”

Nicknamed “Superman” by his fellow Bronx cops for his looks to Christopher Reeve and his 6-foot-5 height, Lemm, 45, moved from Nebraska in 2000 after six years of active duty to become an New York City Police Officer. He served in the 50th precinct in the Bronx as a detective in the warrant squad. During his 15-year career, Lemm made 427 arrests and received five commendations.

In 2008, Detective Lemm joined the Air National Guard, serving three tour overseas before being taken away from us too soon. “He chose selflessness. He chose sacrifice and he chose to serve,” Bratton said.

Detective Lemm was a member of the 105th Airlift Wing. He was due to be home in March before he was killed along with five other airmen when his patrol base was attacked by a suicide bomber outside the Bagram Air Base in Afghanistan.

Following the funeral, a military helicopter flew over the church where officers stood in formation. Lemm was buried at Gate of Heaven Cemetery in Hawthrone, New York.

Detective Joseph Lemm was a hero who paid the ultimate sacrifice to protect us- not only on the mean streets of New York City but overseas in a war zone of Afghanistan. It is another tragic reminder that our officers and troops continue to put themselves in harm’s way to protect our city and nation. And as our nation grateful mourns, we can’t forget the dangers our 10,000 plus troops face every day in Afghanistan.

Lemm is survived by his wife, and two children, a 17-years old daughter and a 4-years old son.

The Most Impactful Political Quotes of 2015