13 out of 14 Republican presidential hopefuls took the stage on Thursday before an influential audience of Conservative Jewish donors and activists. Senator Rand Paul was unable to make the forum due to being held up in the hill for Senate votes.

The Republican Jewish Coalition Presidential forum held in the Ronald Reagan building in Washington, D.C. gave each candidate the chance to speak for 30 minutes to discuss their stance of foreign policy, in particular the U.S.-Israeli relations.

Here are the key highlights from the Republican Jewish Coalition forum. 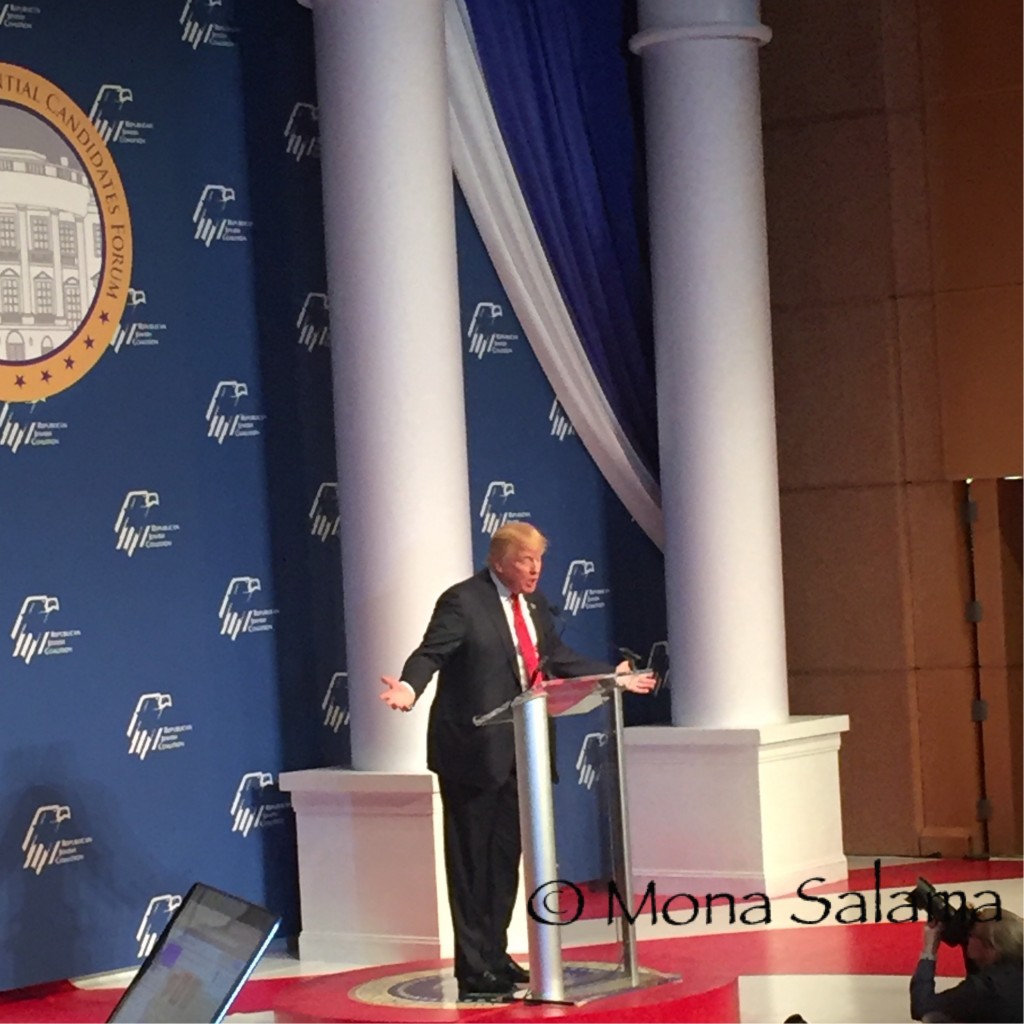 Donald Trump: “You’re not gonna support me because I don’t want your money.”

Real estate mogul Donald Trump spent most of his speech delivering jokes with the crowd about how both are good negotiators and strong business people.

“I’m a negotiator like you folks, we are negotiators,” the GOP frontrunner, said to laughs when talking about the Iran nuclear deal agreement from the Obama administration. “This room negotiates a lot…perhaps more than any room I have ever spoken to.”

Trump promised to renegotiate the Iran Deal instead of rip to shreds where he would include in the deal the return of the four U.S. prisoners that are currently being held in Iran. He also said the deal is the worst thing for Israel.

“John Kerry is the worst negotiator I have ever seen,” Trump continued, declaring that the Secretary of State hasn’t read ‘The Art of the Deal’ book he wrote. “That’s how our people negotiate. They are stupid people.”

However, the laughter quickly turned to boos from the audience during the Q&A portion when Trump refused to take a position about whether the “undivided” capital in Israel should be in Jerusalem or Tel Aviv. “I have to wait until I meet with Bibi,” Trump answered in avoiding the question, which led to the audience erupting in boos. “Just relax, OK?” Trump fired back at the crowd. “You will like me very much, believe me. I am going to be the best thing that ever happened to Israel.” 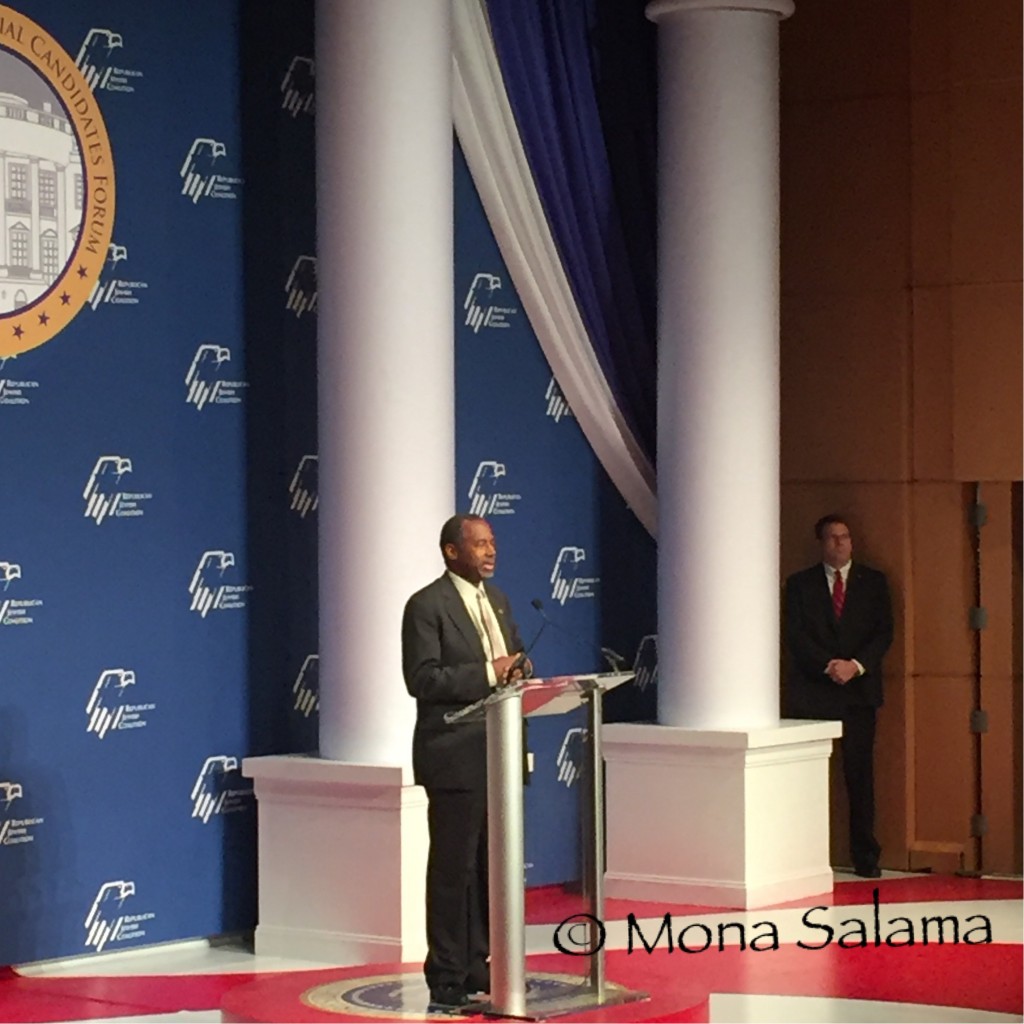 After weeks of taking serious heat for his lack on foreign policy matters, Ben Carson efforts to show improvement went unnoticed as the mainstream media focused on taunting his pronunciation of “Hamas” that sounded like “hummus.”

Carson addressed the audience with a speech-reading script that detailed the history of U.S. and Israel. “If we examine history properly, it is easy to see that the special bond between the two nations existed well before either country existed as a country,” Carson said, noting how the founders of America referred to America as the Promised Land.

On the Middle East, Carson pointed out how the current administration has “zero understanding of this region.” He recalled the Arab Spring that occurred in Egypt was viewed by President Obama as a “democratic uprising.” However, it was a radical Islamist revolt led by the Muslim Brotherhood to take over the region in which President Obama and Hillary Clinton backed. Carson also pointed out how the administration tried to negotiate a truce with the Palestinian terrorist group Hamas and Israel last year.

Carson stated three core principles the next President needs to uphold. “First, all foreign policy decisions must be made through the lens of national security interests,” Carson said. “Second, we are currently facing a clash of civilization” discussing how America needs to unite with Israel, its ally against the enemy of radical Islam. The third principle Carson added was a “strong economy that makes for a strong foreign policy.”

Senator Lindsey Graham, who has been polling 0% since entering the race and can’t gain entrance to even the low-tier debate stage, has decided to tank his campaign of no return and attack Cruz’s preceded remarks.

Tossing out his planned speech about his recent trip to Iraq, Graham surprised the Jewish audience by ripping apart Cruz’s comments about expanding turnout amongst evangelical Christians. “It’s not about turning out evangelical Christians, it is about repairing the damage done by hateful rhetoric driving a wall between us and the fastest-growing demographic in America,” Graham said. “We are losing the Hispanic vote because they think we don’t like them.”

Graham continued to rip apart Cruz’s remarks in regards to social issues, arguing his hard-liner remarks would alienate women to cause the Republican party to lose in 2016. “If the nominee of the Republican Party will not allow for an exception for rape and incest, they will not win,” Graham said. “Ted Cruz doesn’t have an exception for rape or incest.”

He went on to add the Republicans nominee would lose based solely on their social issue position. “It’s the positions we take regarding social issues that can disconnect us from America at large,” Graham said. “I don’t believe you can be pro-life and win an election if you are gonna tell a woman who’s been raped, she has to carry the child of the rapist, you’re losing most Americans.”

Graham also went after Donald Trump for his rhetoric on illegal immigration. “I believe Donald Trump is destroying Republicans’ chance to win an election that we can’t afford to lose,” Graham said. He argued Trump has taken Mitt Romney position even further of self-deportation and that mistake will also cost the Republicans this election. “Now it’s not self-deportation, its forced deportation,” he said. “We are literally going to round them up. That sounds familiar to you?

John Kasich– “My mother told me one time if you ant to look for a really good friend, get somebody who’s Jewish.”

And another from Gilmore:  “In preparation for this very significant meeting today, I did a little looking at the internet… we had to come here today to pass the Kiskus test. I looked it up and the definition is a beef intestine stuffed into a mixture… and seasoning and roasted and I thought that’s the Republican campaign for the nomination.”

Lindsey Graham– “I may have the first all-Jewish Cabinet in America.”

Jeb Bush– “I will take it to Hillary Clinton and I will whoop her.”

Abolish the Federal Education Dept. and the Oligarchy of D.C.