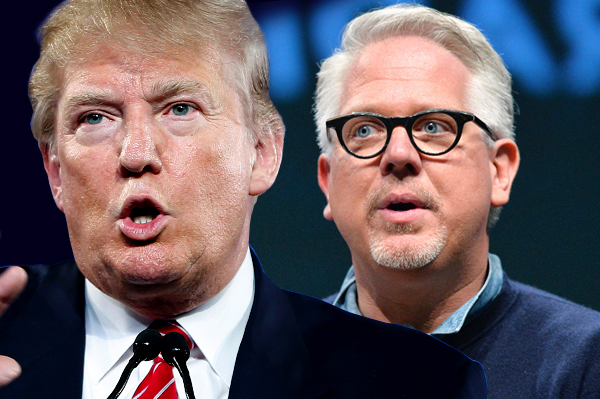 Glenn Beck recently stated that Donald Trump is a demagogue and that he (Glenn Beck) will not vote for him if he is the candidate.

Interestingly, Donald Trump signed the pledge and reaffirmed that he is a Republican and will not run as an independent, thus endangering the outcome of the elections–and yet when the table has turned, the others cannot say that they will support him…

With this attitude, Mr. Beck and those like him – all “honorable men,” all “principled” Republicans – may find themselves living in socialism.

“Demagoguery” is native to democracy. Demos (people) + agogos (to lead) is what a politician in a democracy does. The profane version of “demagoguery” is the result of dozens of political leaders in the history of democracy (since ancient Greece) who have abused this power, i.e. the power invested in the people with which WE THE PEOPLE vote for our favorite leader. A true demagogue lies and deceives in order to foster his or her private autocratic ends. A true demagogue cries “Fie!” at a debate and calls for violence and revolution. A true demagogue is not someone who swears allegiance to a party and supports conservative ends.

As “demagoguery” is native to every democracy, the difference between a statesman (a good demagogue, who wants to further the good of the people and make the country great) and a politician (a bad demagogue who wants to rule and dictate) is therefore twofold: that of a degree, and that of orientation. The one who runs over dead bodies, goes for the revolution and wants to upset and undermine (transform) current social order or status quo, such a politician should be called a “demagogue.” A real demagogue is a community organizer who uses a pretext (such as race) to gather people into a voting block. They do not vote based on persuasion (rationale) – they vote based on an emotion which has no rational basis. One who votes for Clinton because she is a woman has already given the power of the individual to a dictator.

The one who simply feels the same desire to change the trajectory of the economy and foreign policy in order to revert and stabilize the country – he is a not a demagogue but a statesman. Have I just called Trump a statesman? You bet! Everyone on the Tuesday night GOP stage was a statesman (one was a “states-woman” but I am sure she would not mind being called a “statesman” either). Even Bernie Sanders is a statesman because he truly believes what he says. He is not lying to achieve some secret autocratic ends. Of course, he does not understand that the ends he believes in will lead to tyranny, but that is a different matter.

Democracies fall as they rise – by the power of the people. Therefore, WE THE PEOPLE must never give away that power lightly. We simply loan it to the best candidate who we trust will turn the tide in our country’s, our family’s, our personal benefit. We must never say we will not vote because the person on the ballot is a demagogue. That would spell the end of democracy. That would be the shortest way to hell – in our case – socialism.

"Walk a Mile in Her Hijab" Day