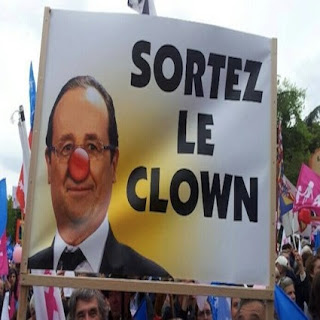 Last month, French President Francois Hollande ridiculed the idea that the massive numbers of Muslim migrants entering his country were any kind of threat.

“Those who argue that we are being invaded are manipulators and falsifiers, who do this only for political reasons, to scare,” the left-wing politician huffed.

And then the pudgy little Socialist had to be rapidly evacuated from France’s national soccer stadium after one of those refugees blew himself up trying to reach Monsieur le Président, and Merkel’s Foreign Minister, Frank-Walter Steinmeier.

Minister Steinmeier had urged rejecting “barriers, fences” when it came to the Muslim migrants, but it was a barrier and the security in front of it that kept one of his beloved refugees from reaching him.

The ordinary people who didn’t have and don’t have the security measures that protect Hollande and Steinemeier died in Paris, blown up and gunned down where they sat, lay and stood.

Hollande’s rhetoric is familiar. You can hear it from Obama. You can catch it on the news. We have nothing to worry about. At least not until the bombs start going off. There will be a multi-layered vetting process. The same system that let in all the terrorists before won’t let us down now.

At least not until it does.

Everything’s fine until the bombs go off. Then we’re told not to worry about it because there’s no way it could possibly happen again. Not with this new hashtag our brightest brains have cooked up. And then we can let 10,000 potential terrorists into the country while ignoring all the “falsifiers” warning of an “invasion.”

It worked for France. It’ll work for us.

Vetting for Syrian migrants works as well in the real world as it does for left-wing politicians.

In Greece, overburdened local authorities don’t care. New migrants are allowed to fill out their own paperwork and are handed letters of transit that allow them access to Europe. An employee at a local registration center was quoted as saying, “We just have to trust what they write down.”

And then the media insists that we have to trust what they write down about the refugees. Even the lies.

In September, at a joint press conference with Secretary of State John Kerry, Foreign Minister Frank-Walter Steinmeier had called taking in migrants a “moral duty” and urged Americans to “increase the numbers you can take into your country”.

Now Germany is hunting for its own links to the Paris attacks. A few days earlier, Steinemeier had boasted that Germans were bending over backwards for the refugees and proving that, “Germany belongs not to the screamers and hatemongers.” But the terror cells of Hamburg might disagree.

But don’t assume that Hollande or Steinmeier learned any lessons from the latest Muslim massacre.

In September, France’s President Hollande told the French that he had information that attacks against France had been planned from Syria and that planning for future air strikes against ISIS would begin.

In that same speech, he announced that France would be taking in 24,000 migrants.

Hollande knew ahead of time that this disaster was coming. He even prepared the response to it at the same time as he was welcoming some of the potential perpetrators into his country.

It wouldn’t be too surprising if he even had a speech pre-written and ready to go for just such an attack.

Even as Hollande was denouncing “manipulators and falsifiers” for trying to “scare” the French, he had a very good idea of just how much there was to be scared of.

The President of France had looked his nation in the eye and lied to them about the invasion.

Monsieur le Président probably didn’t expect to be this close to the killing when it happened. Neither did Foreign Minister Steinmeier. It’s the Jews and Poles in Marseille or the people in Calais who happen to be a little too close to the New Jungle camp that were meant to be the sacrifices of their compassion.

Unfortunately for Hollande and Steinmeier, the Islamic State didn’t get the memo. Unfortunately for us, their only real response to the crisis they caused will be to try to globalize it even further.

Back then Hollande and Merkel were demanding a “permanent mandatory system” for redistributing Muslim migrants across Europe. Germany and France turned the Muslim migrant crisis into a European problem. Now they want to repeat the butchery in Paris around the world.

G20 named the migrant crisis a global problem and expects the world to solve it.

Greece doesn’t have the money, resources or infrastructure to screen the migrant horde. Frontex is undermanned and its employees, in European fashion, work until 4 PM, at which point the refugees just write whatever they want and get handed letters of transit by Greek officials that want them gone.

The Balkan countries are not any better equipped to manage the invasion than Greece. And the European countries that actually want the migrants aren’t interested in checking their papers, but in signing them up for as many social services as possible.

That’s not just true of Europe. It’s equally true of the United States.

Any talk of vetting is nothing more than plausible deniability. Unless a terrorist is already in our database, vetting him is a lost cause. Our system couldn’t handle the World Trade Center bombers or the 9/11 hijackers and they came from functioning countries that weren’t in the middle of a civil war.

We are not going to be able to vet tens of thousands of people who claim they come from Syria, who have fake passports or who plead that they lost their passports at sea, whose names can be rendered in enough ways to give even a linguist a headache and who will get access to the United States long enough for them to disappear even if we did eventually turn up something on them.

And we’re not supposed to vet them.

Despite the rhetoric, France and Germany are less interested in fighting ISIS than in getting the United States and the rest of the world to take more Muslim migrants. Instead of having ISIS in every city in Europe, they seem determined to make sure that it is in every city in the world instead.

ISIS may have carried out the brutal massacres in Paris, but Hollande, Merkel and the other friends of the refugees helped make it happen. And they want to help make it happen around the world.

The migrant crisis is an invasion. The bodies in Paris could just as easily have been stacked up in any country that was foolish and feckless enough to open the door to ISIS by taking in “refugees”.

If Obama and Kerry succeed in their plan to bring tens of thousands of Syrian migrants to America, the next brutal massacre might not happen in Paris. It might happen in one of our cities instead.

Advice From a Middle School Teacher: Follow the Rules!