Israel is facing a grave “king” crisis. Never mind the Muslim terrorists stabbing, slashing and shooting any Jews in range. The real threat was uncovered by Shabak’s Jewish section, a gang of Jewish youths had plotted to “appoint a king”. It’s a lucky thing that Shabak had prevented the “return of the king” through the usual measures of planting informants and torturing detainees.

Just think, if they hadn’t arrested and detained those “right-wing extremists”, Israelis today might be forced to take orders from an undemocratic king instead of an undemocratic Supreme Court. 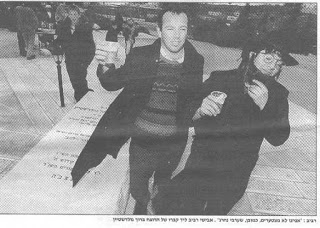 After Rabin’s death, Kikar Malchei Yisrael, the Square of the Kings of Israel, was renamed Kikar Rabin. The kings of Israel had to make way for the eternal celebrations of outrage for the murder of the Labor PM at the hands of a pawn of a Shabak employee. That killing led to the same ritual cries about the threat of “right-wing extremism” which was somehow worse than the “left-wing extremism” whose pandering to terrorism had killed over 100 Israelis since Oslo.

It’s a lot more than 100 today. And center-right prime ministers have come and gone with bold promises and only made things worse. The regular chants of “Insert name here melech yisrael” at political conventions don’t lead to any arrests. Though considering their tackiness maybe they should.

Still ex-Shabak boss Carmi Gillon has reemerged to cry “We’re at a worse point than before the assassination of Rabin.” Not in the sense that the terrorists set off by his old boss can now bombard Jerusalem and Tel Aviv. But in the sense that more “right-wing extremists” are noticing it.

The star of The Gatekeepers, along with five other major Shabak bosses, is an expert on “right-wing extremism”. Just ask Avishai Raviv, the Shabak informant who set up the “extreme right-wing” group Eyal, whose videos of blood oaths, Rabin-killing practice and claims of responsibility for assorted attacks that the fake group had nothing to do with made for great left-wing television. The drama climaxed with the killing of Rabin by a man whom Raviv had urged, “Be a man. Kill Rabin.”

In the midst of the crackdown on “right-wing extremism”, the agonized bewailing by center-right leaders about all the horrible “extremism” in their camp, it turned out that Raviv, the man in the “Rabin is a Traitor” t-shirts and Rabin in a Nazi uniform poster at a Netanyahu rally was working for Shabak’s “Gatekeepers.” And Shabak had to stop arresting people for telling politically incorrect Rabin jokes and figures on the center-right had to stop writing self-denounciations for thought-crimes.

But we are told that this sort of thing doesn’t happen anymore. At least that’s what Naftali Bennett assures us. Never mind the Susiya entrapment case which just wrapped up this month. Shabak doesn’t do this sort of thing anymore. Except when it does. Bennett claims that the detainees want to “dismantle the foundations of the state.” Shouldn’t they be in the Knesset then?

If you want to plot to “dismantle the foundations of the state”, the right place for you is at the Haaretz conference, not a Shabak basement. Alongside ex-Shabakniks also plotting to “dismantle the foundations of the state”. President Rivlin, who attended the conference alongside anti-Israel groups that are actually plotting to dismantle the state, without appointing any kings, calls the radical left-wing paper, “one of the most important papers for the existence of Israeli democracy.”

One of Haaretz’s prize journalists, Gideon Levy, calls for the destruction of Israel, defends Hamas and promotes BDS. David Landau, the former Haaretz editor, told Secretary of State Condoleezza Rice that Israel was a “failed state” and urged her to “rape” Israel. “I told [Rice] that it had always been my wet dream to see this happen,” he said.

Nobody in Shabak detained Landau without charge and then imposed a court order to prevent his name from being published. Nobody worked him over in a basement for plotting to “dismantle the foundations of the state”. Instead Rivlin eulogized the dead monster by saying “it was a pleasure to be his friend”. The Jerusalem Post and Times of Israel which are tripping over themselves to call for more arrests of “right-wing extremists” showered more love on the dead terror pimp.

Left-wing extremism never seems to lead to any arrests. If you meet with terrorists illegally and wreck the country, like Yossi Beilin, or call for the murder of Jews on the right, like Peace Now co-founder Yigal Tumarkin, or even openly support terrorists like Hanin Zoabi, you will not find yourself in a Shabak basement somewhere being worked over by two grinning gorillas until you sign anything they tell you to.

Instead you’ll wallow in EU cash, in literary and political awards, in newspaper columns and tributes. And even those on the center-right will say that your views may be terrible, but in person you’re a surprisingly charming and thoughtful fellow.

There’s never a left-wing extremist threat. Instead it’s a grave threat that a dozen teenagers in some small village will spray graffiti or protest police brutality or appoint a king. And if they don’t do it on their own, a dozen Shabak informants who have gotten into debt or petty crime will make sure that they get around to doing it so that the left-wing security state and the sellout center-right can scream their heads off about the “right-wing” threat.

Now the threat is back again.

There’s a petition by 47 Rabbis “We support the fighters of the Shabak and all the security arms protecting our state, in plucking from the roots all expressions of Jewish terror. as this is crucial.”

From the roots. All the way down.

Ya’alon demands the ritual “soul-searching” and warns that there are “implications to ignoring the rule of law even in minor instances, such as illegal building in Judea and Samaria or those who raised their voices against the High Court of Justice.” There are implications to Ya’alon’s implications too. The implication is that political opposition to undemocratic institutions is itself a crime.

And, of course, the Rabbis must be investigated. Not Arik Ascherman and his group. But the pro-Israel kind of Rabbis.

All this for a case in which there are still no real charges, no real trial and no real evidence. In lieu of these things, a blurry video runs non-stop on television and an army of public figures rises to denounce the threat.

The Duma case was a joke from the start. The rash of fires in the Arab village were part of a clan rivalry. The official version of the crime couldn’t have even physically happened. But the left had its agenda and the center-right, Netanyahu and Bennett had discredited themselves by failing to accomplish anything tangible, and so jumped on board to silence right-wing critics.

The only way to keep the Duma hoax alive is to extract confessions from someone, anyone. Shabak claims to be using “ticking time bomb” torture methods to extra these confessions. But after all this time where is the bomb ticking? The bomb is political. No one wants to fight Islamic terrorism and certainly no one is going to start locking up left-wingers for trying to “dismantle the foundations of the state”. That just leaves the easy target, angry and upset teens and twenty-somethings, whose ethnic cleansing is constantly called for by the left and its international backers. 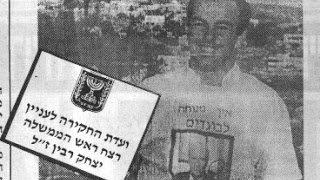 With enough torture, someone will confess to plotting to appoint a king, setting all of Duma on fire and even photoshopping Rivlin in a Nazi uniform. The center-right will bewail how “we” have become capable of such extremism. The left will demand even more powers for Shabak to fight the “right-wing threat” before its next boss heads off to a Haaretz conference.

Ex-Shabak boss Ami Ayalon endorsed Breaking the Silence (not to mention nukes for Iran) as did ex-Shabak boss Yuval Diskin. Shabak bosses can wage war against Israel and the IDF, yet no one is going to arrest them for trying to undermine the foundations of the state. Certainly they won’t wind up in their own basement being worked over.

We have once again found the “enemy within”. It’s not the Muslims and their left-wing collaborators, but another phony right-wing terror group, that when examined closely will no doubt have an unfavorable ratio of Shabak agent provocateurs to actual members. But we can’t fight the PLO or Hamas. We can’t fight the New Israel Fund or Breaking the Silence. Or their Shabak pals. But we can always take another whack at the dangling pinata of “right-wing extremism” which, on close examination, turns out to be manufactured by the extremist left-wing establishment.

And then it’ll be time for another Haaretz conference and the destruction of Israel.