Holidays are a calendar. They mark points in emotional and physical time. They remind of us who we are.

Many of those celebrating Chanukah celebrate a holiday that does nothing more than celebrate ‘celebration’, the rituals and rites of entertainment, a special food, a symbol whose meaning they don’t remember and a little family fun. 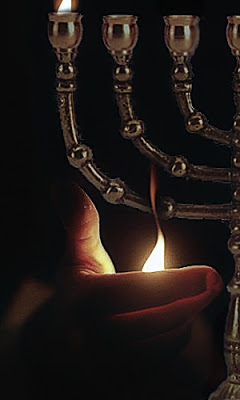 Chanukah is many things but it is not a safe holiday. It is a victory celebration in a guerrilla war. It is a reminder that Obama’s war on Jerusalem was preceded long before him by Antiochus’s war on Jerusalem. It is a brief light in a period of great darkness.

Today’s struggle for Jerusalem, for Judaism, for freedom of religion and a meaningful life continues that same old struggle of Chanukah.

The overt militarism of the Chanukah story has made it an uncomfortable fit for liberal Jews who found it easier to strip away its dangerous underlying message that a time comes when you must choose between the destruction of your culture and a war you can’t win. In those dark days a war must be fought if the soul of the nation is to survive.

There are worse things than death and slavery, the fate that waited for the Maccabees and their allies had they failed, the fates that came anyway when the last of the Maccabees were betrayed and murdered by Caesar’s Edomite minister, whose sons went on to rule over Israel as the Herodian dynasty.

Nations can survive the mass murder of their bodies, but not the death of their spirit. A nation does not die, until its soul dies, and the soul of a nation is in its culture and its faith, not in the bodies of its citizens.

Tonight that first candle, that first glimmer of flame over oil, marks the night that the Maccabee forces entered Jerusalem, driving out the enemy armies and their Jewish collaborators, and reclaiming their people’s culture and religion.

The light of the flame was a powerful message sent across time that even in the darkest hour, hope was not lost. And Divine Providence would not abandon the people. Time passed the Maccabees fell, Jerusalem was occupied and ethnically cleansed over and over again, and still the menorah burned on. A covert message that still all hope was not lost. That Israel would rise again.

Israel had used signal fires and torches held up on mountain tops to pass along important news. The lighting of the menorah was a miniature signal fire, a perpetuation of the temple light, its eight-day light a reminder that even the smallest light can burn beyond expectation and light beyond belief and that those who trust in G-d and fight for the freedom to believe in Him, should never abandon hope.

That divine signal fire first lit in the deserts by freed slaves has been passed on for thousands of years. Today the menorah is on the seal of the State of Israel, the product of a modern day Chanukah. The mark of a Jerusalem liberated in a miracle of six days, not eight. Six as in the number of the original temple Menorah. And the one on the seal as well.

For those liberals who believe that Jewish identity should be limited to donating to help Haiti, agitating for illegal aliens and promoting the environment; Chanukah is a threatening holiday. They have secularized it, dressed it up with teddy bears and toys, trimmed it with the ecology and civil rights of their new faith. Occasionally a Jewish liberal learns the history of it and writes an outraged essay about nationalism and militarism, but mostly they are content to bury it in the same dark cellar that they store the rest of the history of their people and the culture that they left behind.

Holidays aren’t mere parties, they are messages. Knots of time that we tie around the fingers of our lives so that we remember what our ancestors meant us to never forget. That they lived and died for a reason. The party is a celebration, but if we forget what it celebrates, then it becomes a celebration of celebration. A hollow and soulless festival of the self. The Maccabees fought because they believed they had something worth fighting for. Not for their possessions, but for their traditions, their families and their G-d. The celebration of Chanukah is not just how we remember them, but how we remember that we are called upon to keep their watch. To take up their banner and carry their sword.

History is a wheel and as it turns, we see the old continents of time rising again, events revisiting themselves as the patterns of the past become new again. Ancient battles become new wars. And old struggles have to be re-fought again until we finally get them right.

Modiin, the rural center of the old Maccabee resistance, is a revived city today, larger than it ever was. Modiin-Maccabim has some 80,000 people living there. In the ancient days, this was where the Maccabee clan rose against the Seleucid conquerors over religious freedom. Today it is a place that the European Union labels an illegal settlement. A place that Jews have no right to live even though it is within sight of the Maccabees who lived and died there. Over two thousand years after Chanukah, Jews are still not allowed to live in peace in Modiin. 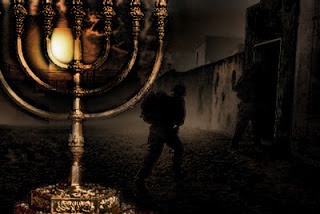 The new Maccabees are farmers and teachers, men and women who build families and homes in the lands of their ancestors, who brave the threats of terrorists and international tyrants to live their lives and raise their children. Knowing that they will not be allowed to live in peace, that everything they stand for is hated by the UN, in the capitals of great empires and even by their own government, they still put flame to wick and mark the first day of many days of the miracle that revived the spirit of a nation and inspires it to this day.

The Jew today is called on to forget. To turn his children into bricks in order to construct the utopia of their new world order. To bend to the progressive wheel and wear the social justice chain, and cast his own offspring into the sea of zero population growth. To give up his nation, his land, his faith and his future to toil in the shadow of the pyramids of socialism. To go down to labor in Egypt once more, in South America and Haitian slums, in barrios and villages, in ghettos and madinas, to give up who he is in order to serve others in the new slavery of social justice.

It takes courage to resist physical oppression, but it takes even greater courage to resist cultural oppression. The terms of physical resistance are easy to understand. Force is used against force. Cultural resistance is far more difficult, and by the time the necessity for it is apparent, it can often be too late.The Maccabees had to resist not only physical oppression and armed force, but the cultural oppression of a system that regarded their monotheism, their nationalism, their traditions and rituals as barbaric. A system that much of their own fellow Jews had already accepted as right and proper.

Every year that we celebrate Chanukah, the left makes another attempt to “desecrate the temple” by destroying its meaning and replacing it with the usual grab bag of social justice issues under the union label of “Tikkun Olam”. And each time we push back against their ruthless assault on Jewish history and tradition the same way that the Maccabees did, by reclaiming our sacred places, cleaning away the filth left behind by the occupiers, and lighting the Menorah to remind us of who we are.

Chanukah marks the culmination of the Maccabee campaign for the liberation of Jerusalem. It is the time when we remember the men and women who refused to submit to the perversion of their values and the theft of their land. It reminds us that we must not allow our land to be stolen under any guise or allow our religion, history and culture to be perverted on any pretext. The light of the Menorah reminds us that the sacredness of a nation is in its spirit and that preserving that spirit is an eternal struggle against the conquerors of land and the tyrants of souls. 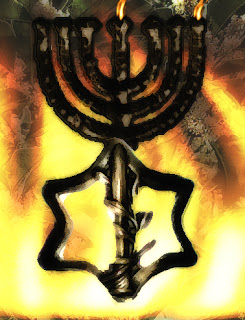 Chanukah is a Holiday of Resistance. It commemorates the physical and spiritual resistance that is required of us sooner or later in all times. Chanukah takes us back to the armed resistance and the moral awakening that liberated Jerusalem and connected the Jewish people with their G-d once again. And that reminds us to never give up, not in the face of an assault on our bodies or on our culture. The lights go out, but they are lit again, each day, for thousands of years, reminding us to hold on to our traditions and our faith, rather than trade them in for the trendy trinkets and cheap jewelery of progressive liberalism.

To light the menorah on Chanukah is to pass on a signal fire that has been kept lit for thousands of years. From the first holiday of Passover, after which the freed slaves kindled the first Menorah, to the final holiday of Chanukah, that light burns on. The historical cycle of Jewish holidays begins with Moshe confronting Pharaoh and demanding the freedom of the Jewish people. It ends with the Maccabees standing up to the tyranny of Antiochus and fighting for the right of the Jewish people to live under their own rule on their own land.

The lights of the menorah embody the spirit of the Jewish people. A spirit that has outlived the atrocities of every tyrant. In the heart of the flame that has burned for a thousand years lives the soul of a people.