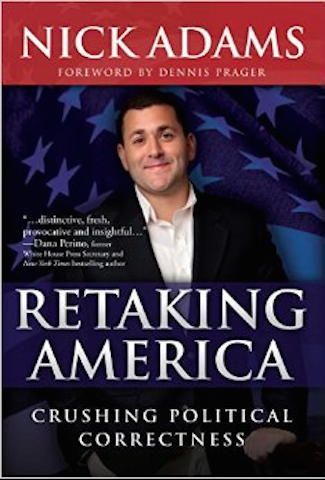 Nick Adams is the founder and executive director of the Foundation for Liberty and American Greatness (FLAG), an organization dedicated to promoting American exceptionalism.  In his new book, Retaking America: Crushing Political Correctness, Adams uses his personal experiences as an Australian-turned-American to explain our country’s need to combat political correctness as a way of preserving America’s exceptionalism.

Adams does an exceptional job of pointing out conflicts that have arisen because of our politically correct society. Although America was founded on free speech, equality of opportunity and the American Dream, the theory of political correctness butts heads with everything our nation stands for.

Although Adams goes into great detail explaining how political correctness is dangerous for American society, he outlines his 5-step plan to revert the United States back to the beacon of hope it once was.

“We need to be intellectually honest and recognize this is not purely a phenomenon of the left. This includes going through and routinely calling out our own side, and even ourselves and our own contribution to this problem,” Adams says. “However, it is abundantly clear that political correctness is primarily driven by the left and my book cites various left-of-center thinkers and opinion-shapers who agree with that assessment. The reason is that while the right’s outrage merchants exist, they are infinitely more likely to be easily written off and sidelined by cultural tastemakers as cranks and angry people. They’re less impactful than their left equivalents, because the left tends to dominate the overwhelming majority of important cultural institutions, such as entertainment, media, and education.”

Dana Perino, Hugh Hewitt, Oliver North and National Review praise Adams’ book and I highly recommend it, too. Don’t miss out on this great Christmas present–pre-order your copy today.

Liquor Store Clerk Brought A Gun To A Gun Fight