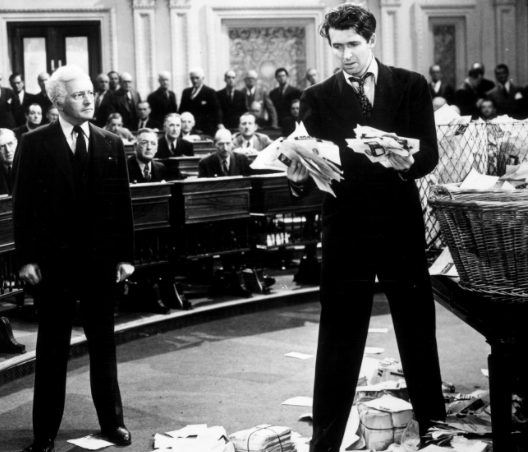 The iconic film “Mr. Smith Goes To Washington” portrays a political novice in Jefferson Smith, a naturalist, gentle and kind, the leader of Boy Rangers. He is used by the corrupt machine that is Washington, D.C. in 1939, appointed by the governor of his state to the U.S. Senate on the notion that due to his naiveté and soft persona, he will be the perfect malleable instrument to roll over in order to get through a bill which is nothing but a payoff to special interest big donors. The film premiered in Constitution Hall in Washington sponsored by the National Press Club. 4000 VIP’s were invited including current Members of the Senate, some of whom were purported to have walked out, infuriated by the portrayal of the malfeasance. The film won 11 Oscars, including Best Picture, and Americans cheered watching this character thought to be one incapable of “doing the necessary” to uphold the principles that founded this nation do, in fact, just that.

Now today we have Ben Carson, a man who chose medicine, not law, for his career path. As with Jefferson Smith, Dr. Carson’s gentle manner is thought to be too quiet, too non-aggressive, to “do the necessary” required of the President of the United States of America. The Washington Press Corps, his rivals, comments made on social media have all made their opinions quite clear: Ben Carson is a nice man but not prepared to undertake the enormous responsibility of the office. Perhaps it is my lifelong love of civics and politics and my own experience of over twenty years of a patient’s involvement with neurosurgery, more than three dozens operations to my brain, brain stem, and spinal cord, (none performed by Dr. Carson I hasten to add), the countless numbers of neurosurgeons, neurologists, neuro-radiologists – with a few ‘Chiefs of’ sprinkled throughout – which allows me to be fully confident that this Constitutional conservative possesses not just the intelligence and ability, but most important, the leadership qualities so necessary to perform the duties of the Office of President.

While by no means a complete unknown to the nation, too many hear “Doctor” Ben Carson and have a generic picture in their minds. They hear “surgeon” but the specialty doesn’t matter. Even those who are told he was the first neurosurgeon to successfully separate twins conjoined at the head, most do not know what that entailed, not just in hours of the most delicate of operations but the team he built from several specialties, how many times that team rehearsed the procedure in order to get things timed down to the last second only to discover once he opened the surgical area that there was an enormous amount of blood. Dr. Carson then had to figure out why, from where, how to deal with it, how to get this complication added into the time constraints, all with a matter of immediacy which would ensure neither child would die. But not just this particular instance, likely hundreds of similar “surprises” occurred, I have no idea the specifics only a general knowledge of some of the things a pediatric neurosurgeon would encounter. If the voters of America want a leader, a man who can put together a learned and competent team with which he would head, but not rule, someone who is more than capable of handling emergencies with the calm sharpness necessary, they need look no further than Ben Carson.

“But he has never held public office!” the shouted objection. “He has no foreign policy experience!” cry more. Neither do any currently in the running, save Hillary Clinton, as Dr. Carson himself has pointed out. The political class in the media are constantly hitting at what they call “stumbles with foreign policy” after the terrorist attacks in Paris several weeks ago as the excuse for his poll numbers to have fallen, when in truth the negative turn began after Politico.com published its false hit piece on Ben Carson’s youth, which Donald Trump used in order to promote the lies and mock the narrative, delighting Trump’s followers and giving doubt to others. It doesn’t matter those lies were proven false, it doesn’t matter that a simple listen to the audio of the speech he gave before the Republican Jewish Coalition earlier this month clearly has Dr. Carson saying “Hamas” but for an initial couple in which he stresses the incorrect syllable in mispronunciation: HAM ice which turns into hah Mahss in short order. Ted Kennedy was never thought to be unqualified for office no matter his numerous mistakes and regional pronunciations … but of course, he was a career politician, and a Democrat to boot.

Those in the punditry claim Dr. Carson is only running on name recognition from the speech he gave at the National Prayer Breakfast in 2012, implying opportunism no matter the man has written several books, many No. 1 on The New York Times Best Sellers list which speak to the history of our country and its current state, the problems we are enduring and solutions to them. Along with writing books he has also written newspaper op-eds, traveled the country for years speaking to groups, young and old, on a wide range of topics all with a tie to the things which make us a great nation from the moment of America’s conception. It is unfortunate that Ben Carson is now an afterthought, brushed aside as just a doctor when he is so much more. It is sad that too many who claimed to be staunch believers in true conservative principles such as small government, limited government, reducing the tax burden, moving the power and money out of Washington back to the States and cities where it belongs, these voters have had their heads turned by loud voices and prideful boasts. Some ignore Dr. Carson’s reassurance to Israel that she will find a friend again in an America under his leadership. They refuse to listen to his rational goals toward ending the evil that is ISIS, and his better solution to the Syrian refugee crisis, instead paying attention to the false portrayal of him, or worse, to candidates who don’t even know America’s defense plans let alone how to seriously defeat the belligerents in the Middle East.

If you are one, if you are someone who has decided Ben Carson cannot be considered a viable candidate to be President because he’s never held elected office before, do yourself a favor – head over to You Tube and look up some of his motivational speeches. Not just his 2012 speech at the National Prayer Breakfast but the one he gave at it earlier in 1997, one of only two men to have ever addressed that audience twice; the other was the Rev. Billy Graham. Do not write off Ben Carson just yet, as the press and the GOP establishment wish you do, give him another look; you might be quite surprised at what you discover for yourself.

Dr. Ari Babaknia: When Silence is Not an Option

This War is Not About Religion, It Is About Hate.