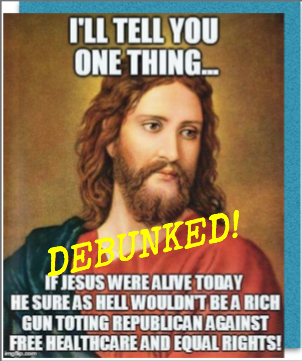 You may have already seen it: A meme is floating around the internet this week, carefully timed for maximum insult to conservatives on Jesus’ birthday. I actually chuckled when I saw this progressive hack job, and decided to take a moment to debunk this predictably shoddy liberal hate piece with a few facts. Enjoy!

First: Jesus himself turned water into wine. Obama’s CDC tells us alcohol is responsible for approximately 88,000 U.S. deaths every year. That is almost 3X more than all gun deaths combined.  Which should lead an only slightly rational person to conclude that guns are not at the top of Jesus’ list.  (I’m betting a certain something called ‘personal responsibility’ would make the cut, however…)

Second: If leftists could step outside of Common Core math they would discover that healthcare is not free. A magic wand does not exist that suddenly makes cancer drugs appear; nurses don’t have a paper sack full of payroll money appear in their mailbox every month; doctors don’t blink their eyes 3 times and have life saving machines just fall out of the sky.  Republicans just want it affordable, with choices. Now, that’s not so painful, is it?

Third: It was Republican Abe Lincoln that freed the slaves.  It was Republicans led by Everett McKinley Dirksen in 1964 that invoked cloture in the Senate that allowed civil rights legislation to finally move forward.  And it is now Republicans TODAY that elected the first black Congresswoman from Utah (Mia Love, whom is also the first Haitian American in Congress), the first black Senator from the South since Reconstruction (Tim Scott), the first female Senator from Iowa (Joni Ernst), and the list goes on.

And there you go! Just a little fact-checking on Google, and suddenly we have educated leftists more in 3 minutes than what they could do for themselves over the last (painful) 7 years.

So as we merrily go our ways this week, I would like to recommend that y’all continue to be gun toting Conservatives this holiday season.  Because if an armed burglar kicks the door in at Progressive Patty’s New Year’s Eve party, throwing her 6 lb. box of wine at him…Just ain’t gonna cut it.

Merry Christmas and Happy Hanukkah everyone!!

Grandma Got Run Over by a Deer—For Real!

Dr. Ari Babaknia: When Silence is Not an Option