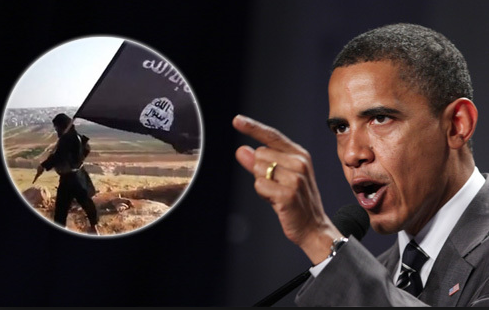 “Weakness is a friend of danger, the enemy of peace. Obama has been a weak president,” Sen. Marco Rubio said. We do not have to go to Hobbes or Machiavelli for ideas on how to deal with Putin or Assad. Clearly, the latter is a puppet of the former and both swiped the floor with Obama. What is Obama’s strategy? Does the Vacillator in Chief even know that, in order to execute a tactical operation with success, there must be a strategy? If not, we may win every little struggle, liberate 70 here, add 50 there, release 5 for 1 or 1 for 0 while 4 are still imprisoned in Iran… It seems to me that what the Red Liner in Chief is doing is playing fantasy football!

The White House provides the following “Four Pillars of the U.S Strategy against ISIL:”

“The U.S. has sent a small contingent…” that does “not have a combat mission, but [is] providing the support needed for Iraqi forces to go on the offense,” the second point of this “strategy” reveals. What does this mean? There is no offense in progress (the Iraqis have to, as yet, go into offence) and our 50 Special Forces soldiers are there to somehow “stimulate” Iraqis courage. Imagine we had sent 50 tanks to the Western Front in 1945 but ordered them to just drive around and show off in order to stimulate the courage of the French resistance. Thank God there were no weaklings where it mattered when Hitler was in power!

“Redoubling our efforts…” – when you “redouble” zero, what do you get, Mr. O? Moreover, we are not “redoubling” airstrikes but our “efforts to cut off ISIL’s funding.” How? By lifting the sanctions on Iran and sending them $160bil? To “counter ISIL’s warped ideology” – what does that mean? Why can we not call a terrorist a TERRORIST?! “Warped ideology” literally means “thinking twisted by heat.”

I watched Fluffy Iglesias on Comedy Central the other day and he cracked a joke about his show in Saudi Arabia. They took him to a desert in the middle of nowhere (comedy is banned in public places, cities…). There, the audience was split in 2 halves by the center line (women to the right, men to the left) and the front rows of women all looked like terrorists (only a narrow chink for the eyes showing). Nonetheless, a Muslim man approached him before the show and said: “In America, you think we look sour, like dis, because we hate you,” he paused. “You should be living in 120 degrees all year round,” he explained. “It’s the heat! Not all Arabs hate Americans – most of us look like dis,” he said, warping and twisting his face, “because of the heat!”

I suppose Mr. O watched Comedy Central to pick up the language to formulate his strategy…

Last time I checked on the BBC World Service, the invasion of Muslims to Europe is in full swing. Some countries take only Christians (Slovakia, Czech Republic), others negotiate quota (Hungary, Poland, Denmark…), yet others plead with Brussels to “take and distribute them” (Italy, Greece) while most refuse to take any (Spain, Finland, Hungary, Slovenia) and others are left out to hang dry (Bulgaria, Romania). Germany and Sweden are the greatest of charities – provided that they can force the others into Banki Full Moon smiles. Are there any “innocent communities” left in Syria?

Naturally, it is a part and parcel of WH “strategy” to accept 250,000 Muslim dependents before Mr. O is out of office.

Of course, there are laws, but who bothers with laws – we have – ehm – a strategy!

Data Collection and The Information Age