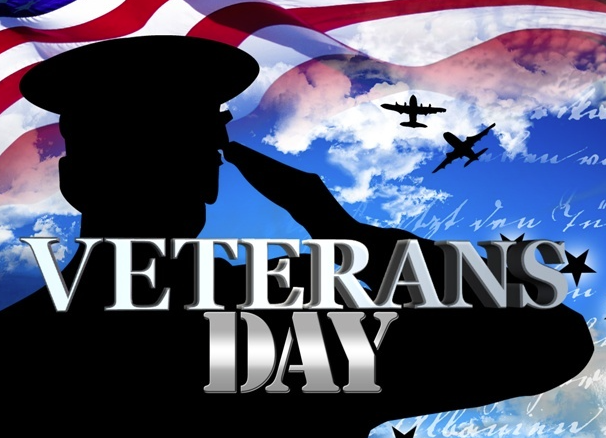 So often when we think of Veterans, our minds go to those we call the Greatest Generation. Most likely because we think of the thousands who left their homes, their families, many of them still fresh faced young men with their whole lives ahead of them- to fight enemies of nations they’d never seen other than on a map or in magazine or newspaper photos.

The young men, many of whom lied about their ages who signed on became symbols of duty, honor, sacrifice and oaths never expiring. Many heroic acts inspiring, yet many thousands more served quietly and if they made it, went on about quiet lives when they came home.

Since that time, so many men and women have sacrificed -from the most simple daily pleasures and projects, to time spent; many have given their own peace away so others could have it. Some of our Veterans have paid more than others, but all have paid a personal price which the rest of us will never quite know or understand.

Veteran’s Day is a day to honor those who have served. Last year some special friends shared what they experienced when they served our country, and still now as Veterans.

Most Vets I know say the same that they would do it all over again if asked, or if they could. I’d like to carry on the conversation this Veterans Day, having some of their thoughts about service and life since – told in their own words…

“My service gave me a purpose and an education and built confidence in myself. It then became an honor to realize that I was a part of the best defense in the world.

I don’t really think any of it was hard, and did not miss out on anything. My service awarded me the ability to do things, go places and meet people, which I would never have had the opportunity to, had I not have enlisted.

The best advice I could give someone now serving, is to know, you will never be the same person or look at the world the same once you have gone in and no one except those you have served with will ever understand the change. Embrace it, and remember only about 3% can do what you do.

The absolute hardest thing to deal with after leaving the service is fitting back into the civilian community. The time you serve and the education you receive does not afford you the same opportunities for employment as someone who never served. Once you get out, although you were trained and schooled for a career, and worked at that job, when you get out, the civilian community requires you to become retrained and redo your schooling. I see that as a big hardship for those who have left the service. We have to start all over at square one and it can be very overwhelming. It also erases the confidence you once had in yourself, as the world is telling you, what you did, really didn’t count.”

“I would do it all over again in a heartbeat. I cherish those days I spent training and learning how to win at battle and about my own limits. I mostly miss the camaraderie, because it’s about the man next to you. Serving your country in the Armed Forces is one of the most important things and American citizen can and should do. I don’t regret a second of it!

The loss of privacy and personal freedoms at times was the hardest part about being in. I don’t like people telling me when I can eat, urinate, sleep, etcetera, but that goes with the territory.

The hardest part of transitioning out is the discipline to ‘shoot to stop the threat’ instead of ‘shoot to kill’. I don’t suffer from PTSD, but I feel for guys that I know that have it and thousands more that do also. I am angry that our government, namely the VA doesn’t take care of our veterans like they deserve to be treated. There is no reason why veterans should die waiting for treatment. There is no reason why illegal aliens and non-citizens are given handouts and treated better than our veterans.

My advice for those that are in, keep your eyes open, shoot fast and with true aim, and watch out for your buddies. Never leave a fallen comrade behind and never second guess yourself or hesitate. Bad things happen quickly and you need to react immediately, not analyze it. ‘Move further, faster, and fight harder than any other soldier.’”

“Having kids greatly changed my priorities and the way I view the world, so while I went in purely to serve my country initially, it would have to be a direct need to get me back in now…but if they really did need me, I’d go back again in a heartbeat. Not so much to fill someone’s numbers or stand in formation, but if another war pops off and they need me to do my thing, I’ll be back.

My kids are my universe now, and I really don’t think I could choose to be away from them for so long unless it was absolutely necessary. My hat’s off to the service members who can deploy with kids at home, because I just can’t do it.

Of course if it were a question of being in the same time, place, age and circumstance again would I still make the choice to serve? Absolutely.

I’ve never been particularly good at taking orders or being bossed around…funny choice to make the move to the military then, right!?! I had a pretty full life before I went into the military; I owned a business producing large scale music festivals, had graduated college with a marketing degree and studied abroad for my last semester of college, living in France. I missed quite a few things about civilian life, but never regretted going in because I had already checked most of my bucket list off before I left for Basic Training.

As for transitioning out, I just spoke about this at an event yesterday in Denver; the biggest differentiator I’ve seen in guys hit really hard with PTSD or integration to civilian life is getting busy and moving forward with life the moment you get out.

Some of us hit the ground running, start looking for jobs or start school or whatever the second we’re out (or even before), and we tend to turn out pretty well. The guys who wait until the last second, take a few months off to “find themselves” or just sit on a couch to grow a beard and play Xbox…those are the ones who end up pretty bad off.

Idle hands are the devil’s tools. I’ve seen it in every generation of vets (I taught a “Writing Therapy for Combat Vets with PTSD” course at the West Los Angeles VA that was 80% Vietnam vets), and it’s true for every generation. Get busy living, or get busy dying.

Always work on building your knowledge base and resume, even while you’re in. The military has great benefits in terms of education, and the more you can have knocked out before you ETS the better. Once you get out and the paychecks stop coming, every second counts. You can either start on your degree or be far behind the people you’re competing against in job interviews, or you can already have that part knocked out and start off on the right foot.”

I want to again thank each of my Veteran friends for being so open and honest and willing to share your experiences.

It’s always been my hope that more people will remember, and recognize our Veterans more than one or two days a year. They are our true heroes. If it weren’t for them, our world would be a more brutal place.

For all of our Veterans, and those still serving now, Thank You. Not only for your sacrifices for our own freedoms, but for liberating, helping and gaining freedoms for others.

Daniel Greenfield: The War Against the Jewish Trees