An analysis of financial tracking report generated from November 17th, 2015 on how much financial assistance countries have contributed to United Nations programs for the Syrian unrest and subsequent refugee crisis shows the United States as the lead contributor. The United States contributed almost $1.3 billion for the current calendar year, with more than $281 million still pledged.  Over 40 donor countries contributed $4.5 billion to Syrian programs with over $730 million in outstanding pledges.

A detailed itemization of contributions and pledges by the United States show an additional $504,000 pledged, but not included in the total amount pledged from donor countries—bringing the United States total remaining pledged amount to $785,000. This appears to be creative accounting on the part of the UN as the money was pledged in March at the Third International Pledging Conference for Syria, hosted in Kuwait City.

These numbers represent a year-to-date tally for 2015 alone. The United States contributed 1.7 billion in financial aid in 2014 for a two-year running total of more 3 billion dollars.

A review of financial tracking reports for the last two years show $10 billion in contributions and pledges in aid directed towards the civil unrest in Syria and its resulting refugee crisis.

As a matter of perspective, Syria’s population has been estimated to be around 23.4 million. An Amnesty International report estimates approximately 4 million refugees fleeing from Syria between 2011 and 2014.

The November 2015 financial tracking report of United States contributions to the United Nations earmarked for programs addressing the Syrian unrest generated a list of 166 entries for the United States. It is unclear how much of the money funneled to these organizations goes towards administrative costs and how much actually reaches the refugees themselves in the form of goods, services, and cash payouts. Some of the aid is also destined for people in Syria, including some Palestinian refugees trapped in Syria. It is unknown how much of the aid might be delayed, halted, or intercepted by either ISIS or Syrian troops.

The recipient organizations receiving funds from the United States include:

As the United States continues in its generosity towards Syria via the United Nations, it also owes over $18 trillion dollars in debt with no sign of that debt decreasing. Given the bleak financial outlook as a debtor nation, a search for demands by US officials for accountability on the organizations receiving the aid yielded no results. 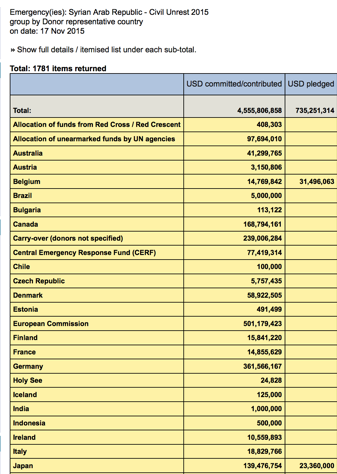 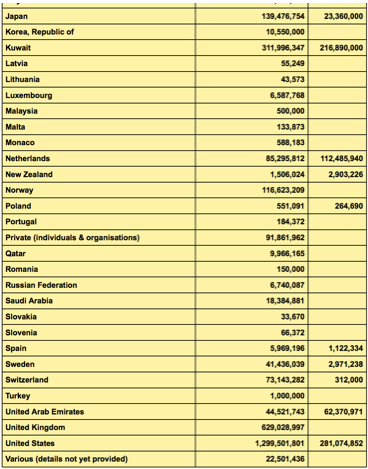 Hillary Clinton Lays Out Strategy to Defeat ISIS in NYC