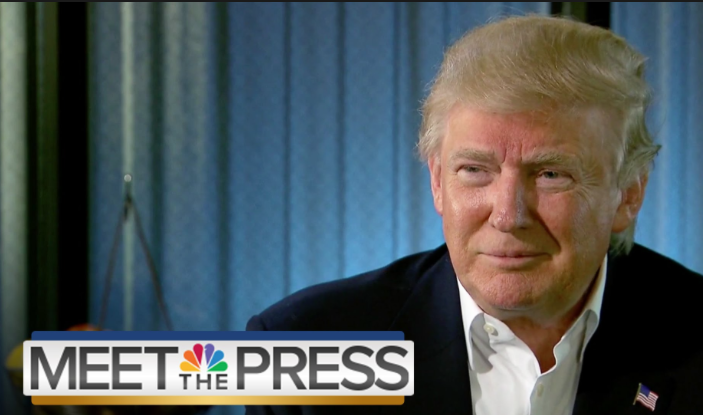 Donald Trump was interviewed on Meet the Press Sunday with Chuck Todd chiding Trump on the legitimacy of his claims. Trump navigated to Obama’s real intention of bringing Syrian migrants into the United States and challenged the various numbers being thrown out by the Obama administration. One number, Trump quoted, was 10,000, followed by quoting Hillary and Bernie Sanders who cited 65,000 during the Democratic debate. He then added, “I have it upon a certain amount of knowledge—I’m very friendly with people on both sides—that Obama’s plan is 200,000-250,000.”

Trump has been consistent throughout his campaign and again during the interview, that “. . . we can’t have it, we do not know who these people are, they are undocumented totally . . . we can’t have people coming in we know nothing about . . . this has the potential to be one big fat Trojan Horse. And we cannot have that, Chuck.”

Over the Thanksgiving weekend the Left-wing media was propagating with counterpoints that the refugees are undergoing elaborate vetting, listing the following:

However, according to Michael Steinbach, assistant director of the FBI, in his congressional testimony last month, there are no Syrian computer databases for our investigators to use in their famed “vetting” of refugees.

“You’re talking about a country that is a failed state, that does not have any infrastructure,” he said. “So all of the data sets — the police, the intel services — that normally you would go to seek information don’t exist.”

It’s possible that during that agonizing 24 months of waiting, someone will warn our immigration officials about particular refugees. Then, our government will admit them anyway — as they did with Boston Marathon bomber Tamerlan Tsarnaev.

Tamerlan’s suspected co-conspirator in the murder of three Jews, Ibragim Todashev, was another beneficiary of America’s generous humanitarian policies — humanitarian toward foreign criminals and terrorists, monstrous toward Americans.”

We are being bombarded with talking points from every rank and file Leftist operative that not admitting Syrian refugees is “a betrayal of our values,” as President Obama has been chanting. We are not “honoring our heritage” his echoers reiterate.

As Ann Coulter so aptly says, “The rise of Donald Trump reminds us of the popularity of another, long-forgotten American value: protecting Americans.”

Colorado Shooting: The Media’s Biased Narrative on Abortion and Guns