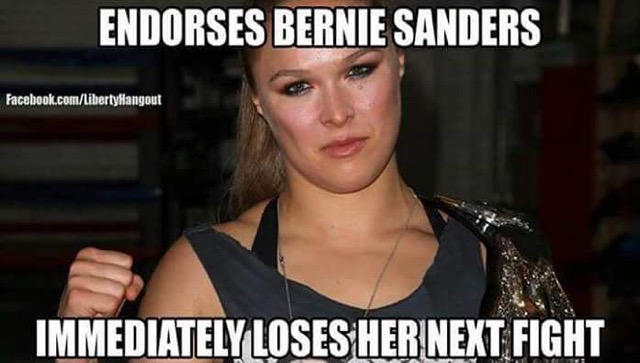 Maxim Magazine got the scoop of Ronda Rousey’s Presidential endorsement:

“I’m voting for Bernie Sanders, because he doesn’t take any corporate money.  I don’t think politicians should be allowed to take money for their campaigns from outside interests.”

As a UFC star and actress, Rousey’s endorsement of Democratic Socialist Sanders comes as quite a shock. Her public comments about issues like feminism, gender equality and pay gap would make one think she leans to the right. Rousey often points to the fact that she works hard for her success, as well as not wanting to be pitied because she is a girl in a sport dominated by men.

When challenged with a question about the gap in fighter pay between boxing champ Floyd Mayweather (who earns hundreds of millions from a single pay-per-view fight) and herself (paid substantially lower), Rousey said she “very comfortable,” pointing out it would take around 50 fights to almost equal the amount Mayweather has made. “If I got to a point where I had almost 50 fights, I would probably be making close to the same amount of money as Floyd,” Rousey said. “But at this point I have 11, so I can’t expect it to be exactly equal yet. I have to put more time in.”

Yet with all the remarks she’s made about how her gender has nothing to do with the amount of money she makes, Rousey now supports a guy who believes the opposite. Sanders is known for drawing huge millennial crowds as he screams for the closure of gender pay gap, saying the government should step in and help boost women’s wages so they are equal to men.

When Rousey was asked if she would vote for Hillary Clinton if Bernie loses the primary, she said ‘no’ . She made it clear she isn’t anything like Hillary, who has used the feminist card to get far in life and to win the presidency.  “I’ll probably vote for a third party again,” Rousey said.  “To be honest, in 2012 I was against both candidates so I just picked any third party because if more people voted for third parties than they would have to take third parties seriously.”  (In 2012 it reported that Rousey voted for third-party candidate Rosanne Barr.)

As for Donald Trump, Rousey said during her UFC fight in Brazil over the summer that she “doesn’t want a reality TV star to be running my country.” It comes as a blow for Trump who claimed that Rousey supported him. Instead, she is throwing her punches behind the socialist Senator from Vermont.

Unfortunately now Rousey can really feel the Bern, or rather burn, as Holly Holm knocked out Rousey with a knockout kick (brutal head kick) to become the new UFC women’s bantamweight champion, defeating Rousey’s undefeated record. Rousey’s endorsement of Sanders prior to her biggest match ever is indicated that she maybe should have focused and trained harder instead of weighing in on presidential politics.

Bernie is reportedly happy with the endorsement and might actually win the nomination–but many of Rousey’s fans are still confused as to why she would endorse such a person. Hey, if Sanders needs to go on the offense and get rough to beat Hillary, he might as well call Rousey. Maybe she can K-O Hillary in 14 seconds or lose in the second round like she did with Holm. Who knows?

I still love you though, Rousey, and you will always be my idol, but I can’t idolize of your recent endorsement. Stick with fighting girl.

Paris Attacks: Are We Next?