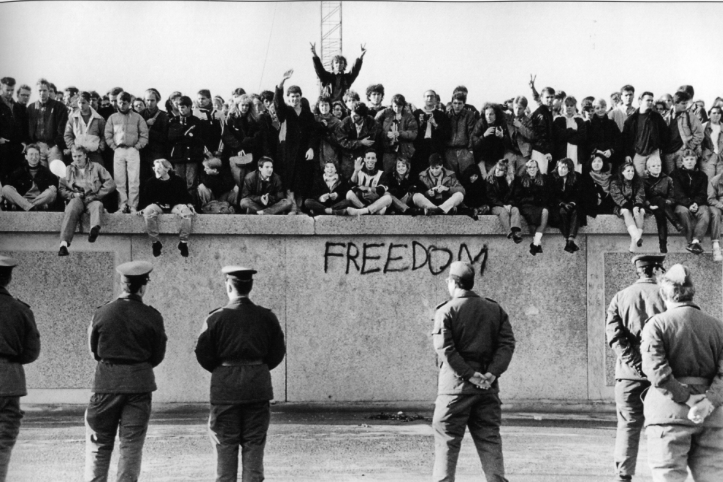 It was this week, 26 years ago, that the citizens of East Berlin were permitted to meet their families in West Berlin – for the first time in nearly 30 years. The infamous “wall of shame” symbolizes the Iron Curtain, a term of many sources, used during World War I, but not in wide circulation until it was popularized by Winston Churchill. It was decreed at the Yalta Conference in 1945, during which Stalin rose from his seat, leaned over the map of Europe and made a flat line saying: “This is yours, this is mine.” At the time, the Red Army occupied most of Eastern Europe, with a military power three times that of the Allies. No nations, if they can help it, negotiate from the position of weakness…

Years later, living inside the Eastern Bloc, we knew the story well – it was proudly touted by our comrade teachers. But we only knew what we were supposed to, permitted, allowed, indoctrinated to know. So it happened that, as the first stream of hungry easterners rushed the wall, we – deeper in the Bloc – we did not know what was going on at all. In fact, I did not see the pictures of the wall being taken apart until months, if not years, later. At the time, there were only two government approved TV channels and an official radio channel, broadcasting news about “bright tomorrows” and another 5-year plan being successfully fulfilled. All “unofficial” radio broadcasts (such as Radio Free Europe and BBC World Service) were jammed. We were kept in complete darkness.

There were rumors though. I was with other “national elite” athletes locked up in the socialist “Sports Institute.” We had lived there under lock-and-key for the past four years: whitewashed walls, one small locker for clothes, the only “personal property” I had was my underwear and a toothbrush. “Yes, comrade coach,” and “Yes, comrade teacher” was all I was permitted to say. The National Team outfit was provided by the state, including our workout gear and meal tickets when we traveled out for competitions. We could go home on special permits, usually once a month, to see our parents. The school-workout-school-workout routine started at 6am and ended at 8pm, lights-out at 10pm.

It took about two or three weeks for the news to reach us. I paid attention, but tried to be as inconspicuous as possible – it was early that year that I was caught crossing the border, jailed, cross-interrogated and let go only because I was on the Olympic Team. I had a thick KGB-STB file and even a year later, when my father ran for the Senate in the first free Federal Parliament, Secret Service found our apartment spiked with bugs. “You never know when it will turn back…” the saying went.

The one thing that Central Government and Socialism do well is diminish the free will of the individual: you must obey, else you will go to the mines, will be “disappeared” overnight, your property (whatever little you may have left) will belong to the state and you will be sentenced by the Court of Social Justice for the Crime against the People and the Party! Everybody knew that. Everybody lived in silence, kowtowing to the blithe and blaze dictator up at the tribune two, three times a year – whenever some Proletariat/Mayday anniversary came.

Thus, even when the news reached us, we were not jumping up and down with joy. We were very cautious not to let anybody know how exactly we felt. “Lay back, stay inconspicuous,” my parents said. At the turn of 1989-1990, the Red Army was still in the country and not quite under Gorbachev’s control. The “Velvet Revolution” (as it came to be known, because there was no bloodshed), took place gradually, as if in stages: at first, we watched the commie “papalashe” (big wigs) appear at some public place “reinstalling order;” then, a week or two later, they reappeared, applauding “certain changes.” Meanwhile, nothing was happening. We were so stuck in our yes-comrade-teacher-yes-comrade-coach routine it would not have occurred to us what exactly could change and how. Finally, in about a month, they came out with some of the opposition leaders and underground writers no one had been allowed to mention out loud, such as Havel and Kundera…

Havel stood up with his timid smile and people yelled and cheered. We were taught that he was a bourgeois child whose parents were merciless capitalist pigs and exploiters of the proletariat. He had allegedly owned the Barrandov Film Studios, also known as the Hollywood of the East. “Can you imagine,” the Czech literature teacher asked us once, “one man having so much money and power? Isn’t that immoral? Isn’t that criminal?” – “Yes, comrade teacher,” the class nodded their heads…

By then, Havel was browbeaten, had suffered in the uranium mine, been tortured and subjugated – and it showed in his face. Some even wondered if the communists did not bring him up there by force, in order to appease people. “You never know if it will turn back or not…” the shabby corners of the streets still whispered.

Havel, what a real hero! It must have been sweet for him to see that all his suffering had not been in vain… He was our Ghandi, our Dalai Lama, our paragon of moral virtues – overnight. How can indoctrination disappear overnight? I suppose every small child can tell that Red Ridinghood is good and the wolf is evil.

Still, nothing quite happened overnight. The fall was but a stage in the process, a most representative and symbolic one, perhaps, but still only a stage. The fall of communism was gradual, as the negotiations between Gorbachev and Reagan progressed. Gorbi, as we called him with the diminutive of love one would show for a panda bear, had introduced Perestoika (reconstruction of the Party from within) and Glasnost (policy of free speech). Finally, he reached out to President Reagan in Washington and Reykjavik. One had to read between the lines though, as the news came to us censored and distorted.

Even two years after the fall of the Wall, people were still scared. I recall how when Gorbachev was kidnapped and taken to Crimea, the hardline communists took over Soviet Union and the putsch (coup-d’état) which took place in Moscow sent shivers down the spine of every budging democracy across eastern and central Europe… It was then that Soviet Union fell apart and Ukraine voted for independence. “Would the Red Army apparatchiks take over and re-install communism over the new democracies?” we all wondered. “You never know when it’s going to turn back…” I lived and studied in London at the time and my parents told me not to travel back until the situation “eases.”

However, it was not so “tight” – or “hot,” if you will – as they feared. Why? Mostly because, in the meantime, all former communists became the greatest of Democrats.  They professed themselves to have been against communism since they were born! They were the ones oppressed and unappreciated! Suddenly, the country was teeming with Democrats and capitalists, every street corner grocer was a future Rockefeller and every school councilman a pro-western right-wing leader!

I have to laugh because, years later, when I studied in Prague, I could still see through them – it was so easy to tell who was a turncoat, who had been a real commie and would go back any time again… Think of the Nazi Party, National Socialists – same thing.

I was born into the darkness of socialism, born to seek light – and, let me tell you, it took a lot of struggle and fighting. The Fall of the Wall? It is pretty and moving, but it was like rising your hand while still in the ring, all sweaty and bloody from the fight, wondering if you are going to collapse, get hit by an underhanded shot, or – if the referee is a turncoat, a wolf in sheep’s clothing, a papalashe mafia guy who would flash a toothy smile as he was being awarded the Order of Communist Work for finally doing away with you, getting you back to the mines where you belong…

My memories are mixed and it is with great regret that I recall the phrase “you never know…” Today, watching the crowds of Bernie Sanders’ followers profess the same credo that the bravest and best of the nation risked their lives to escape from. The sickle is there to cut your free-thinking throat, the hammer to nail in the lid of your coffin – to put you in a small apartment in a gray block of flats, give you what to eat and tell you what to say!

The socialists (and I did live in socialism, not communism) build walls to imprison people, not to protect them. They start building walls when they speak – and they are not finished until they bury you inside. Beware, for you only have a limited amount of freedom to give away. Also beware, for the crowd shall force you to comply, to give away your freedom for nothing, for some failed abstract notion of “social equality” or “social justice” or “social democracy.”

Beware, because only the brave, those unafraid to fight for their freedom – can be free

Daniel Greenfield: The Death of the American Welfare State

Mizzou U: The Hypocrisy of Academe and How Big Money Sports Drives Higher Education