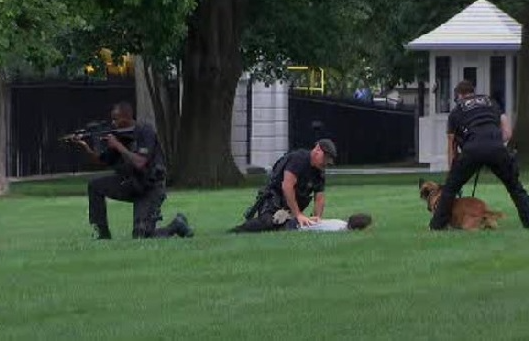 On Thanksgiving day Joseph Caputo jumped the fence surrounding the White House on Thanksgiving Day as the Obamas were having lunch.

Luckily (unlike our borders) the White House has ultra-strong security, surrounded by armed Secret Service agents.  So as news of the jumper became known, the Obamas were taken to another part of the house in lockdown mode.

In an ironic twist, the Democrat Party sent out pre-Thanksgiving ‘talking points’ encouraging people to discuss the need for stronger gun control during Thanksgiving lunch.  Obama even recently stated that guns make us “less safe”.

However as seen in the attached photo, one of Obama’s Secret Service agents is shown holding one of those scary “assault weapons” the Democrat Party seems to hate so much.

Perhaps this would be a good time for Obama to make another of his big, bold statements and either practice what he preaches and remove the “dangerous” guns surrounding the White House–or maybe it’s time for him to admit that the reason he and his family are safe today is largely because of our 2nd Amendment.

Colorado Shooting: The Media’s Biased Narrative on Abortion and Guns