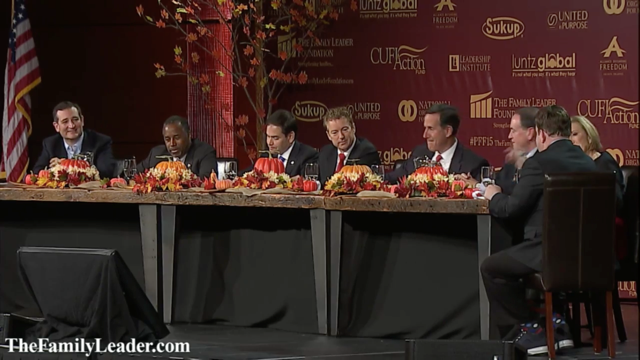 An audience of more than 1,000 Christian evangelicals braved the snowstorm to attend the forum that spanned for more than three hours. “No doubt Satan was trying

Just as Senator Ted Cruz was being asked the first question of the night, protestors interrupted for a brief time chanting, “Deportation, anti-family” while holding up a banner that read, “Is deportation a family value?” Audience members countered the chants by cheering “U.S.A, U.S.A!” The protestors then began to demand Luntz talk about immigration.  Luntz said the topic will be addressed if they would take their seats, “Otherwise it will not be brought up at all.” The protestors refused his offer and were escorted out of the forum.

The commotion from the protestors led to a lengthy discussion of what the candidates consider the ‘lack of civility’ from the Left. Senator Marco Rubio pointed fingers at President Obama for what he has done to “deliberately divided Americans against each other for purposes of political gain.” Rubio added in the aftermath of the Paris Attack, the president “spent more time attacking Republicans this week than he did talking about how we are going to attack ISIS.”  Rubio also mentioned how Hillary Clinton called Republicans her enemies, all contributing to the furthering of political discourse.  Carly Florina agreed that it was inappropriate for Hillary to indicate that Republicans are her enemies.

“One of the things that has happened in our politics and maybe in American life in general is we sometimes attack the messenger if we disagree with the message,” said Fiorina. Pointing out the show ‘The View’ in which they attacked her because of her message, Fiorina said that is why she went back on the show.  “We need to have those fundamental discussions about the difference of our views without demonizing the messenger or using a lot of adjectives to not talk about the core differences,” she said.

Ben Carson said America has become a less mature society. “The less capable you are explaining your disagreement, the more likely you are to engage in infantile behavior,” Carson said. “All you have to do is go on the Internet and read an article, and then go to the comments section. You usually can`t get five comments down, before people are calling each other idiots and all kinds of names.”

Twenty minutes into the forum, another protestor began heckling about animal rights, which shifted the discussion back to political correctness.

Huckabee asked, “Have you ever notice that liberals come to events like this and yell at us, but do you ever see conservatives going to their events and interrupting them like that?” Huckabee’s comment drew loud applause from the audience. Carson added that “political correctness is used as a control mechanism and it’s used for intimidation.” Senator Rand Paul pointed to the way the Left uses political correctness when it comes to talking about abortion, citing the example of when he challenged DNC Chairwoman Debbie Wasserman Schultz to discuss when life begins.  Paul pointed out that when fighting back, we can win the battle without being afraid of political correctness. “We got them when we fight back. We are going to make them defend that seven pound babies have no rights a minute before they are born,” Paul said. Cruz said the best counter to political correctness is speaking the truth. He used the example of recent protests from college students across the nation, screaming to shut people down because they can’t handle the truth. “We are seeing universities all across the country with leftist coddled kids, usually with trust funds protesting against the horrible oppression because the microaggression of a word that scares them,” Cruz said.

“We have a president who won’t even identify ISIS as Islamic, nor won’t he identify them as a state,” Santorum said while describing the growth of ISIS. “The president says we can’t bomb [ISIS] because we can’t recognize them as a state for it will give them too much prestige. We can’t say they are Islamic because it will give them too much credibility. This is delusional and costing lives all over the world.” Santorum added the only way to defeat ISIS is take their land and delegitimize the group by destroying them. When asked to define the war is he would he take, Santorum detailed his strategy of just war. “We need to destroy ISIS body and state,” he said. “Not just bombing to take their land, but with sufficient ground troops along with air strikes and working with the Kurds allies to “protect the national security of the country.”

Rubio emphasized that the most important role as Commander-in-Chief is to engage in armed conflict with ISIS based on national interest.

“ISIS poses a real threat to U.S by actively seeking to attack us by radicalizing home-grown extremist and those to sneak in people in this country to carry out attacks,” Rubio said. “The clear objective is to win by defining what victory is and we must give our military the resource to win and that is not happening now.” Luntz would then ask if Rubio if he thinks Obama doesn’t want to win based on what he said. “[Obama] hasn’t even defined what victory means,” Rubio would answer before going into details of his objectives to defeat ISIS. After Luntz would ask Rubio why Obama is not using the strategy Rubio advocated. “Well, he is a bad president,” Rubio responded, leading to loud cheers and applause.

“We can use our expert military to carry out the plan without micromanaging them,” Carson said. “Right now they are very discouraged because you have an armchair quarterbacks who have no idea of what they are doing and they are interfering. If you gave them the mission without tying up their hands, you will be amazed on how quickly they would get the job done.”

Cruz was one of the most aggressive critics against President Obama, rejecting the idea of Obama being an armchair quarterback. “You asked if Obama is an armchair quarterback,” Cruz said. “It’s worse than that. The policies that he is advancing are helping the other team.” Cruz would then criticize Obama for serving as an “apologist for radical Islamic terrorism.” He took another shot at Secretary of State John Kerry for the statement he made earlier this week, comparing the recent terrorists attacks in Paris to the Charlie Hebdo attacks, calling the Hebdo attack “understandable and justifiable.” “I think John Kerry should resign in disgrace,” Cruz said.  When Huckabee was asked what would he do with John Kerry he answered, “Would I like to see John Kerry resign, of course,” Huckabee said. “But let’s not forget Kerry is only doing the bidding for Obama. Instead of getting rid of Kerry, I would like for Barack Obama to resign if he is not going to protect the American people to protect the image of Islam.”

When it came time to the discussion about faith and how it had been challenged, each candidate spoke with compassion recounting their personal stories. Fiorina spoke about her stepdaughter’s long battle with drugs, who later died from the “demons of addiction.” Her stepdaughter passed away around the same time Fiorina was battling breast cancer and completed treatment. Fiorina then shared details about her personal relationship with Jesus.

Carson was asked how he dealt with losing a patient as a neurosurgeon. “I have always acknowledged God for the successful surgeries,” Carson said. “But he also gets the blames for the ones that are not successful.”

Paul shared a personal story about a wounded veteran he met during the campaign trail who made him think of the decision about going to war. “Me and my wife help build a home for a wounded veteran who lost both legs and an arm in the war,” Paul said. “Seeing his faith and talking to him about why he went to war and what he was fighting for and to hear him say he joined the military to fight for the Bill of Rights and for the Constitution is something I will never forget.” Paul added it really didn’t change his belief but rather made him “think every day about whether or not we go to war.”

Santorum opened up about being angry with God when his son Gabriel was born prematurely and died two hours later. He later mentions how he vowed to never take on the issue of abortion as a Senator, but changed his views after coming close to God. “I was trying to follow what God was calling me to do,” Santorum said trying to hold back tears.

The forum was also an opportunity for the candidates to court the endorsement of the “kingmaker”, Vander Plaats, among evangelical voters. “I truly believe the next president is going to be around that table tonight,” Plaats said. This forum is considered by Vander Plaats as the “final exam” before he endorses anyone, something that is expected to happen anytime before Christmas. Vaander Plaats’ endorsements are very influential in Iowa, helping propel former Governor Mike Huckabee to victory in the 2008 Iowa caucus as well as former Senator Rick Santorum victory in 2012.

Hillary Clinton Lays Out Strategy to Defeat ISIS in NYC