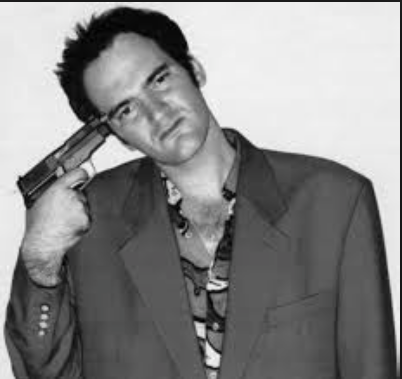 It all started two weekends ago–or four days after the funeral of NYPD Officer Randolph Holder, a brave cop who was shot in the head and later died while pursuing a career criminal on foot in East Harlem.

Filmmaker Quentin Tarantino flew in his private jet from Los Angeles to New York City for a much-publicized Anti-Brutality (Anti-Police, lets be honest) rally.  After reading the names of those killed by police, Tarantino declared, “I have to call a murder a murder and I have to call the murderers the murderers. And if you believe there is murder going on then you need to rise up and stand up against it. I’m here to say I am on the side of the murdered.”

Boycott announcements immediately started spreading from Police Departments throughout the United States, from Los Angeles, Chicago, Philadelphia, to Houston. The National Association of Police Officers added to the boycott asking officers to “stop working special assignment or off-duty jobs…for any of Tarantino’s projects to send a loud and clear message that such hateful rhetoric against police officers is unacceptable.”

In addition to refusing to apologize for publicly calling cops “murders”, he is now pathetically crying that he is a victim. Facing national backlash from his rally remarks (and perhaps to do some damage control for his upcoming movie, “The Hateful Eight”), Tarantino spoke exclusively to MSNBC’s ‘All In’ with Chris Hayes. Tarantino claims that police unions are “slandering him” and that the U.S. has a “problem of white supremacy.”

Stating in the interview that he was happy to attend the rally, Tarantino was then asked about the timing of the event, so soon after the funeral of Officer Holder.

Tarantino callously replied that it was “too bad” the officer was killed so close to the planned protest.  In other words, instead of respecting Officer Holder’s family and friends, Tarantino felt it was inconvenient to delay the rally.

“We have flown in all these families to go and tell their stories and because that happened, we are going to say don’t tell your story and fly you back, we will do it another time it’s just not convenient,” he said. “That cop that was killed, that’s was a tragedy.”

(Side note to Tarantino:  “That cop”, as you said without any remorse, has a name and his name is Officer Randolph Holder. Remember that!  Of course had the roles been reversed and Officer Holder had shot the perp, I’m sure you would remember the perp’s name…What about officers who have been shot and killed by criminals? Why didn’t you mention any of the 33 police officers killed this year by criminals? They risked their lives for the same people who hate cops so they can be alive and safe to attend rallies that promotes hatred of cops…)

Referencing an article in The Guardian in which PBA union leader Pat Lynch called for the boycott, MSNBC’s Chris Hayes asked Tarantino if he thinks his film will be affected by the boycotts.  “I actually have a whole lot of police officers who are big fans of my work, and they’re not going to take Patrick Lynch’s word on what I said,” Tarantino said. “They’re going to read what I said, they’ll watch this show, they’ll hear what I have to say, and I think they’ll make up their own mind.”

The reporters in the Guardian article claim many officers would not stop watching Tarantino films. However if you read the article, only three out of eight officers interviewed a day before Officers Holder’s funeral said they wouldn’t stop watching his movies and his opinion don’t matter. All of them said the same rhetoric as to Tarantino have the right to speak his mind.

So I asked some of my NYPD friends about Tarantino’s MSNBC appearance and every one of them said they are boycotting his films. I won’t publish their names out of respect to them, but I will point out what some said to me.

One officer said, “Yes, because he is a typical liberal POS and he doesn’t deserve my money. I used to enjoy his films, but now I’m not going to miss them.”

Another said, “Yeah, I won’t pay to see it, I’ll just opt for a pirated version. If he feels that cops are murderers, that’s what he feels. However, its unfortunate he feels this way.”

And a third said, “Absolutely. He has no idea what we go through on a daily basis. We face danger on a daily basis and all we want to do is go to work and come home safe at the end of the day. He shouldn’t criticize as a whole and then go make millions in doing so. What we make in a year, he makes in one Movie Theater when his film is released.”

I also posted the same question on Facebook and here is what people said. 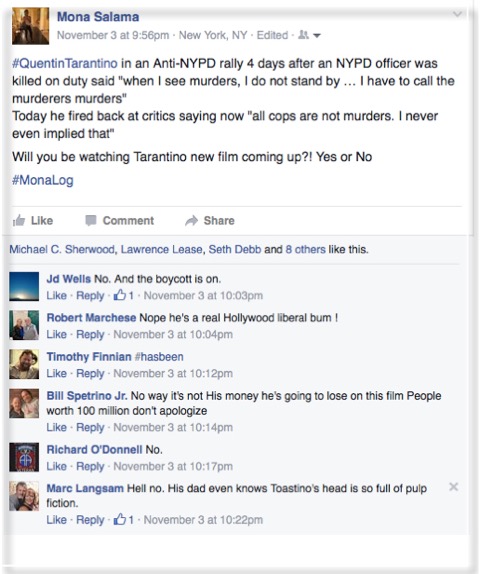 As of this publishing, Tarantino continues to refuse to apologize, pointing out he has First Amendment rights to speak his demented mind.

“I was under the impression that I was an American, and that I had First Amendment rights, and there was no problem with me going to an anti-police brutality protest and speaking my mind,” Tarantino said on MSNBC.  At least he knows a portion of the First Amendment and, in that manner, he is correct. Yes, he has the right to say whatever he wants to say–however, it doesn’t protect you from the consequences of your statements.

So officers are battling back in the way that will affect an out-of-touch, elitist Hollywood leftist the most:  By being respectful and letting Tarantino know they won’t give him their hard-earned money to see his film. That, too, is how the First Amendment works. It’s a two-way street.

With seemingly few people standing up to officers due to growing anti-police sentiments in the media, the only thing officers and police supporters can do is be extra cautious and exercise our First Amendment right of boycotting Tarantino’s films. It’s not a lot, but it might affect his bank account. If that works then maybe he can finally apologize or donate whatever money he made from his upcoming film to families of slain officers. I know that won’t happen, but lets hope that he can learn to shut his mouth and respect our police officers.

It’s worth noting that despite all of Tarantino’s talk about all cops being murderers, he had no problem calling them for help when he found an alleged ‘stalker’ on his property two weeks ago…

A PolitiChick's Story of Cancer, Faith, and a Woman Named Rachel