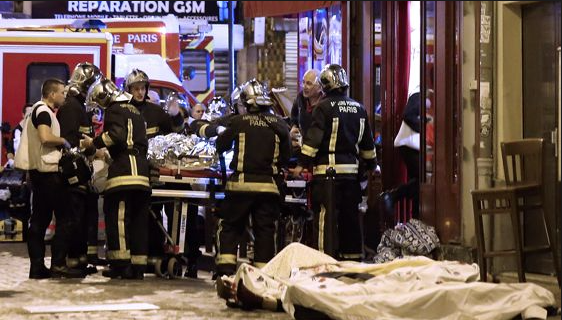 It is inconceivable, the world we live in today. One would wonder if warm blood flows through anyone’s veins anymore. People out for an enjoyable Friday night, gunned down where they sat. No warning. No reason. The beautiful city of Paris, France, stained with the blood of innocent people.

Witnesses to the horrific tragedy report hearing gunmen shout “Allahu Akbar” (Arabic for god is great). Other terrified victims heard the terrorists yell, “It’s for Syria” and “What are you doing in Syria? You’re going to pay now”. There was obviously no doubt of the terrorist’s premise for their attacks on innocent people. Their goal was absolute carnage, in the name of their religion.

As a citizen of a free nation, where a person’s religion and speech is protected by the nation’s Constitution, the thought of killing other people to forward your ideals is inconceivable. Or at least, it should still be inconceivable.

One could draw a conclusion in today’s society we are so willing to accept any and all lines of thought and behavior, the actions in Paris may someday become common place and “normal”.   Many Americans are so overwhelmingly interested in a society with no boundaries in beliefs and thought, which eventually creates an environment of chaos.

In our plight to be a nation of apologizers, we may have written our own death wish.

If these recent terrorists wielded this type of warfare on the innocent people of Paris, what might they do in America? Especially since we have willingly opened our borders and may be welcoming terrorists into our country with open arms.

As Paris closes its borders, America is not only holding the doors wide open for Syrian refugees to enter our country, we are “moving to increase and accelerate the number of Syrian refugees” we accept. We are obviously blind to the fact that terrorists can infiltrate the Syrian refugee population. This aptitude of assimilating into the refugee populace, America could potentially be giving a free ride to the people who seek to kill us.

Certainly, as Americans, this is a difficult issue to weigh. America has always been the land of comfort to those in crisis. The symbol which is Lady Liberty is the stalwart of our fine country, the land where those who are burdened and tired, can seek rest on its shores. However, a country must fully protect its citizens before it is able to save others. Presently, we cannot even control our borders well enough to manage an increasing drug culture, let alone manage border jumping terrorists.

It is obvious the Washington elite can’t see this and is only able to give platitudes to this current situation. Senator John McCain (R-AZ) in a statement regarding the Paris attacks said “this must be a wake-up call for America and our government”.  September 11, 2001 was our “wake-up” call. The sad commentary on our leadership is, we have all been lulled back to sleep by the droning comments of apologies by those who can protect us.

All of us should be asking when American citizens will see our borders closed. When will we halt the importing of 10,000 Syrian refugees? Anti-Terrorism expert, Jim Bernazzani, discussing the influx of refugees into New Orleans, admits ISIL might logically take advantage of this opportunity to install terrorists on U.S. soil. Bernazzani said, “Not every refugee…will face [tight security] scrutiny”. According to Bernazzani, “It’s a percentage game”, when screening refugees.

Many Americans don’t like to gamble. If our safety is coming down to rolling the dice, we shouldn’t even enter the casino.

It is becoming overwhelmingly obvious, with prior attacks brought forth by individuals on our soil, (i.e. the Boston Marathon Bombings) it is time for Washington to be more compassionate in regard to their own citizens, than those of other countries. This may go against every instinct in our souls, but for our safety, until this demon called ISIS can be controlled, we need to seek our safety first. Help should be given in ways which limits the enemy entering our home. Once a cancerous cell has entered the country, it will take root and potentially grow like a wildfire.

With this threat standing at our door, knocking, how can anyone stand and consider letting them inside? It is no longer profitable to place blame on passed actions. The individuals who have allowed our national security to be impaired will be out of office soon, walking around with Secret Service agents protecting them and their families. In reality, they don’t care. Whatever decisions made at this time will not be their responsibilities in the coming months and years. It is on us to make sure our voices for security are heard. We, too, must call for our borders to be closed and the consideration of Syrian “refugees” be halted until we can insure our homeland is safe.

France May Invoke Article 5 of NATO in Response to ISIS

The Real Reason Rousey Lost Her First Ever UFC Match? It's Political.