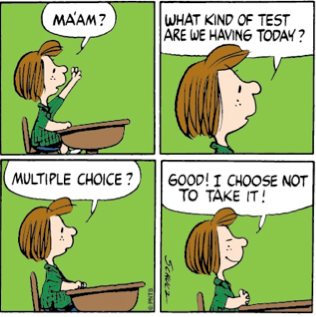 Beware, spoiler alert! This isn’t the main part of the story but it’s something a person worried about testing would see.

Somewhere near the beginning of The Peanuts Movie, Charlie Brown and his friends sit in a classroom and listen to the strange megaphone-in-a-box “waah wa waah waaaah waaaah” sound coming from their teacher. After the noise the children all say, “No, not the yearly standardized test!” They’re not excited about this, same as most kids.

Later they hold an assembly and give a ribbon to Charlie Brown, who received a perfect score of 100 on his standardized test. Everyone loves Charlie now that he’s smart. He’s the most popular kid in the school and the message is, “Do well on standardized tests and you’ll have an amazing life!”

About this time I’m inwardly cringing.

At the end of the assembly they hand Charlie Brown his test with the perfect score on it and to his surprise he sees that it’s not his test at all–it belongs to Peppermint Patty. Poor Charlie realizes that they mixed up their tests and admits to everyone that it wasn’t his test that received the perfect score, therefore he didn’t deserve the ribbon.

The test that Peppermint Patty turned in was one hastily filled out at the end of the testing period for she had fallen asleep and didn’t have enough time to actually look at any of the questions or answers.

She filled her form out by selecting bubbles to fill in that would ultimately create a smiley face. No thought, no preparation, nothing. And for this, she received a perfect score.

This is the perfect illustration of how standardized tests are pretty useless. I’m no longer cringing, I’m laughing out loud.

Thank you Charlie Brown! I knew I loved that block head!