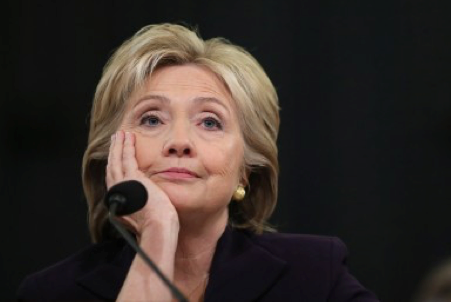 We may now know why Hillary Clinton doesn’t seem to remember that she lied about what happened in Benghazi. One of her closest staffers says that Mrs. Clinton is ‘often confused.’

According to The Hill:

“Former Secretary of State Hillary Clinton was “often confused,” according to a 2013 email from her longtime aide Huma Abedin.

The comment, which is likely to attract attention from Clinton’s critics on the presidential campaign trail, was revealed on Monday following a Freedom of Information Act lawsuit from conservative legal group Judicial Watch.

In the Jan. 26, 2013, message, Abedin gave the note about Clinton while discussing the secretary’s schedule with another Clinton aide, Monica Hanley.

“Have you been going over calls with her for tomorrow?” Abedin asked Hanley. “So she knows [then-Indian Prime Minister Manmohan] singh is at 8?”

“She was in bed for a nap by the time I heard that she had an 8am call,” Hanley responded. “Will go over with her.”

“Very imp to do that,” Abedin said in response.

The email was sent shortly after Clinton suffered received treatment for a blood clot in her head, which was discovered after she sustained a concussion weeks earlier.

It was sent to Abedin via the email address that she kept on Clinton’s personal server.

The message was unclassified but contained a detailed itinerary of Clinton’s schedule for the day, which Judicial Watch worried could amount to a breach of security. By keeping the schedule on what appeared to be an unsecured server, the group said, Clinton exposed herself to unnecessary risk.

“Huma Abedin’s description of Hillary Clinton as ‘easily confused’ [sic] tells you all you need to know why it took a federal lawsuit to get these government emails from Clinton’s illegal email server,” Judicial Watch president Tom Fitton said in a statement.

Perhaps Clinton’s ‘confusion’ caused her to use the Clinton email server to conduct government business when it was obviously too dangerous and risky.

Trump Asks: Is Our President Insane?